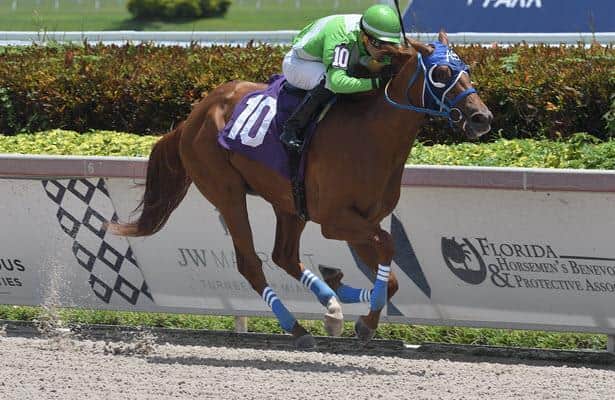 Pedigree analysis becomes more useful if a horse tries a new distance or surface for the first time. In the case of the Grade 2, $200,000 Holy Bull Stakes at Gulfstream on Saturday, pedigree works as part of the basis for selecting the Todd Pletcher-trained Prime Factor. The other main part of the equation remains talent.

Finding talent in a horse is always easier, as Prime Factor shows plenty in his career debut in a local Dec. 12 maiden race. After an adequate break, Prime Factor moves up and presses pacesetter Dr. Duke, and the two of them soon clear the field.

By the turn, Prime Factor hits the front over Dr. Duke. At least five lengths separates Dr. Duke from Semper Fidelis in third and Readthetranscript.

The large gap on the turn between the leading duo and the rest of the field signals that Prime Factor and Dr. Duke quickened significantly.

Prime Factor does not even try his best, though. As they turn for home, Prime Factor straightens out and clears Dr. Duke under a mild hand ride. By mid-stretch, Prime Factor opens up by over three lengths. Then before the wire, Irad Ortiz Jr. turns almost motionless on Prime Factor and lets him finish under his own power.

Despite almost no urging late, Prime Factor wins by 8 3/4 lengths.

Prime Factor’s stablemate Bracken closes for second, while Dr. Duke is third. The fourth-place Broadway went on to break his maiden at Tampa Bay Downs. But it is a concern that Bracken and Dr. Duke both lost their next starts.

Nevertheless, Prime Factor possesses talent. His six-furlong time of 1:10.38 went a bit faster than the 1:10.46 that Lady’s Island won the Sugar Swirl Stakes (G3) in later on the same card. Given Prime Factor was capable of running faster, he was impressive to beat that time.

Prime Factor also earned a 106 TimeformUS Speed Figure, which is not far off the 109 held by Papetu and Sittin On Go in separate races.

As for the pedigree, the most notable part about Prime Factor’s blood is the second dam Dance Swiftly, a full sister to Dance Smartly and half to Smart Strike.

In 1991, Dance Smartly ran a remarkable season that saw her win the Canadian Triple Crown — the Queens Plate, Prince of Wales Stakes and Breeders’ Stakes. After those three races, she took the Molson Export Million Stakes (G2) against males and then the Breeders’ Cup Distaff to cap off a superb campaign.

Smart Strike has been most known for siring Curlin, among others. In recent years, the stakes router Tom’s d’Etat had been leading Smart Strike progeny in earnings.

On top, Prime Factor is sired by Quality Road, who has no problem with siring routers. Given the facts about his royal damline and Quality Road on top, there is no reason pedigree-wise why Prime Factor cannot stretch out to 1 1/16 miles.

Prime Factor is the top choice, but there are two other options to discuss.

Greatest Honour shows an incredible route pedigree as well, which is less relevant as he already broke his maiden routing and ran second in a nine-furlong race.

The son of Tapit is out of Tiffany’s Honour, a Street Cry daughter of Better Than Honour. At one point, Better Than Honour was the most popular broodmare in the world after producing Jazil and Rags to Riches, winners of the 2006 and 2007 Belmont Stakes.

As stated, though, Greatest Honour won a local 1 1/16-mile maiden race already, earning a 102 TimeformUS Speed Figure. He beat Dynamic One in second and Another Duke in third. Another Duke broke his maiden on Jan. 23 with a 98 on TimeformUS.

Prior to that, Greatest Honour’s second-place finish by a neck came against Known Agenda at Aqueduct, who was a distant third in the Remsen Stakes (G2).

Greatest Honour needs to improve on the speed figure scale, but there is no reason he cannot move forward for trainer Shug McGaughey, given the promising maiden win and royal blood. He is the second choice.

There is also Papetu, who ran second at 20-1 in the one-mile Mucho Macho Man Stakes to Mutasaabeq with a 109 TimeformUS Speed Figure. His pedigree is more difficult to figure out, making it a guess whether he wants to stretch out to 1 1/16 miles.

On the strength of the 109 figure alone, Papetu is the third choice. But from a visual standpoint, it seems more likely Prime Factor will step forward and win.

Prime Factor is the main selection, but Pick 4 players might want to throw in Greatest Honour and Papetu, just in case Prime Factor fails to live up to his route pedigree.