Analysis: Jerome Stakes pace sets up for the closers 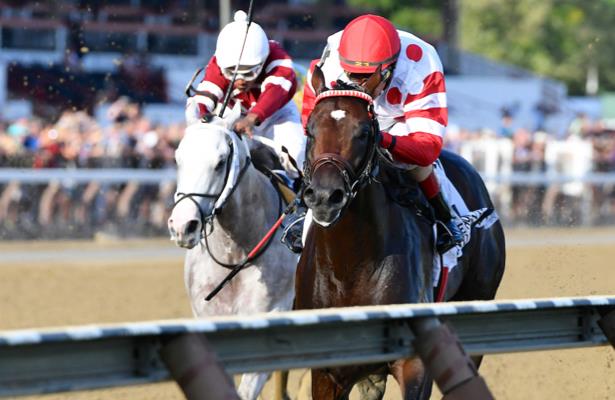 Choosing one horse in the $150,000 Jerome Stakes at Aqueduct is difficult, even though the projected pace clearly favors a strong closer. Rather, I'd separate contenders in two groups for the one-mile race for 3-year-olds offering 2019 Kentucky Derby qualifying points.

According to the TimeformUS Pace Projector, three horses are lined up to stalk or close – Souper Jackpot, Family Biz and Direct Order – and they appear evenly matched based on figures and potential.

On the other side of the pace spectrum, a trio of projected speed horses – Mind Control, Our Braintrust and Gates of Dawn – do not stand out on paper, either, making it unlikely that one of them powers through a speed duel and outlasts the closers.

If all six horses end up where the Pace Projector predicts, then Souper Jackpot in the close-range stalking position is the one to favor because he figures to get first run.

Keeping in mind that this is a lightly-raced, improving horse with a nice pedigree, Souper Jackpot’s current form is decent. After showing nothing in his career debut in June at Churchill Downs, he returned in November and broke his maiden by half a length. Then he shipped South to Gulfstream Park and only lost the Smooth Air Stakes by a neck.

Visually, Souper Jackpot did the most work in the Smooth Air, and he also tied the winner Garter and Tie with a 101 TimeformUS Speed Figure.

In the initial stages, Souper Jackpot pressed the longshot Arrivederla, who felt the pressure and quit on the turn. Once Souper Jackpot secured the lead, he then endured an inside challenge from Maddy’s Last Dance before that one faded in midstretch.

Finally, Souper Jackpot needed to hold off Garter and Tie and barely gave in.

But losing by a neck to Garter and Tie is not the worst result, as that horse previously finished second in the $400,000 Florida Sire In Reality Stakes and won the $200,000 Florida Sire Affirmed Stakes. Also, the main track slightly favored closers on the card.

Souper Jackpot is a half-brother to Awesome Slew, which means he owns rich bloodlines, too. Under Junior Alvarado, he can move forward for trainer Mark Casse.

Family Biz might fall a few lengths behind Souper Jackpot early. He broke his maiden locally by a neck with a good 105 TimeformUS Speed Figure, and it is notable the runner-up horse Haikal went on to break his maiden too, albeit with only a 94.

The number Family Biz earned ties him with Mind Control for the highest speed figure in the field. If the pace collapses, he could find himself in a good position to rally. As a word of caution, though, taking every speed figure as gospel is not a good idea.

Direct Order should find himself last early for the well-known trainer John Servis, and his speed figures top out at 96, making him the slowest of the three closers.

But there are positive notes about him, such as the fact he improved his number with each start. The next move forward could result in a 100 speed figure or better.

Plus, Servis is the kind of trainer that is difficult to throw out, as TimeformUS labels him as hot. Even if the numbers look slow, the human element in handicapping is important.

If the pace completely collapses, Direct Order may win by default closing from last.

What about the speed horses’ chances?

Back in September, Mind Control won the seven-furlong Hopeful Stakes (G1) at Saratoga before attempting the Breeders’ Cup Juvenile, finishing a distant seventh. Given a difficult trip, he failed to show his customary speed at Churchill Downs. Expect a return to his running style seen in the Hopeful when he led from start to finish.

On the downside, Mucho, Nitrous and Sombeyay completed the superfecta in the Hopeful. The latter two horses lost their next starts, while Mucho hasn't run since.

The Breeders’ Cup flop is forgivable, but the public will probably love Mind Control because of the familiarity factor. The Stay Thirsty colt is the most well-known runner in this race as a Grade 1 winner at Saratoga, making him an almost certain underlay.

More likely than not, Gates of Dawn will burn Mind Control out. The expensive Arch colt led from start to finish in his recent maiden win at Parx for trainer John Servis.

Gates of Dawn earned a solid 102 in his maiden-breaker and managed to thin out the field slightly toward the end. Note the seven-length margin between the runner-up Spun to Run and third-place Dubrovsky. That is a good sign for this promising horse.

If Mind Control for some reason scratches, then Gates of Dawn moves up as a serious win contender. For now, though, he is only one to watch and study afterward.

Our Braintrust completes the field, and trainer Cathal Lynch knows how to win the Jerome, as he took this race in 2017 with the Laurel Park shipper El Areeb.

As with El Areeb, Our Braintrust comes out of a Laurel race. He finished second in the Maryland Juvenile Futurity after a perfect trip saving ground on the rail and switching out in the stretch run. Given the trip, it is disappointing he failed to catch the winner.

On the positive side, TimeformUS awarded Our Braintrust a 103. Previously, he also won the Tremont Stakes at Belmont last June, also after breaking his maiden at Laurel.

Our Braintrust does not look like he needs the lead, although the Pace Projector places him right behind Mind Control and Gates of Dawn. Because he owns enough natural speed to lay one or two lengths away, he is still a candidate to burn out.

Furthermore, Our Braintrust probably lacks the talent of El Areeb, who came into this race with two sharp-looking wins at Laurel. But it is still early in Our Braintrust’s career.

From a positional standpoint, Souper Jackpot looks like the winner. Getting 2-1 is not exactly a huge bargain, but it is better than 9-5 or less on Mind Control. If the odds appear too low, then Family Biz and Direct Order will offer the right value and running style.