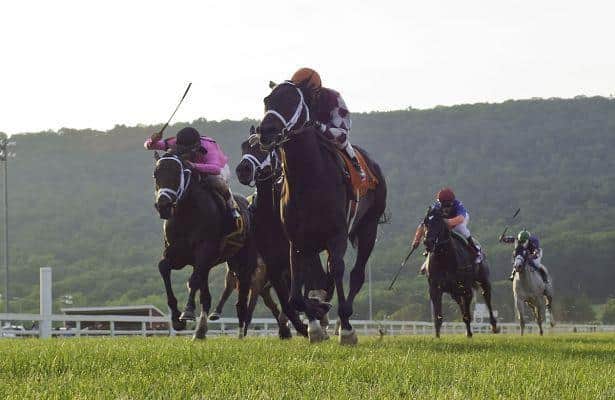 Because the race lacks pace, Uncaptured Spirit might be worth a play in the Grade 2, $400,000 Penn Mile Stakes on Friday at Penn National. Based on his last few races, he could slip away uncontested on the lead.

In his last two starts, which were his only two grass races, Uncaptured Spirit set the pace with standout TimeformUS Pace Figures relative to this field.

For example, two starts ago in the 5 1/2-furlong allowance race at Laurel Park on April 23, Uncaptured Spirit led by two lengths after an opening quarter in a swift 22.10. He maintained the uncontested lead and took the allowance race by 1 1/4 lengths over Hard to be Humble in second, with Wow Whata Summer in third. Wow Whata Summer is entered here.

Note the initial 132 TimeformUS Pace Figure for Uncaptured Spirit in opening quarter of the Laurel race. That number is fast.

Then in Uncaptured Spirit’s route debut in the James W. Murphy Stakes at Pimlico, he was hooked into a one-on-one speed duel early and posted faster fractions of 22.85 seconds, 45.85 seconds and 1:10.48. Those fractions translated into blazing pace figures of 152, 152 and 126. Those first two pace figures were basically suicidal and led to his fade in the stretch.

Considering the pace scenario and first attempt at a route, Uncaptured Spirit gets a temporary pass for fading to fourth. Maybe he can step forward now.

Who can challenge Uncaptured Spirit on the lead?

According to TimeformUS Pace Projector, Witty is supposed to chase him in second. In Witty’s last two starts though, he competed as a midpack runner in two straight seven-furlong dirt stakes races. Witty won those races impressively, but there is no evidence he can press the pace.

Pace Projector also puts Ohtwoohthreefive in third, even though Ohtwoohthreefive has run as a midpack closer and closer from the rear in his last two starts. The only time Ohtwoohthreefive contested the lead came on synthetic at Turfway back in February with pace figures of 100, 96 and 100.

Annapolis on the rail could show some speed in order to secure position under Irad Ortiz Jr. His overall record is a perfect 2 for 2 at this point, and he probably owns a slight class edge on these horses based on last year's form.

As a 2-year-old last September, Annapolis broke his maiden by 4 1/2 lengths at Saratoga. He then won the Pilgrim Stakes (G2) at Belmont by only a head over Portfolio Company before skipping the Breeders’ Cup.

The betting public is likely to make Annapolis lower than his 9/5 morning line odds. He could possibly start at even money. After all, this colt is trained by Todd Pletcher with Irad Ortiz Jr. riding. Many casual bettors will take him based on the trainer and jockey names alone.

For what it is worth, Portfolio Company went on to finish a disappointing eighth in the Breeders’ Cup Juvenile Turf and fifth in the more recent American Turf Stakes (G2). Yet, maybe the time off for Annapolis since beating Portfolio Company gave him more time to develop as a colt.

At his morning line odds of 10-1 or higher, Uncaptured Spirit is a value win bet, or win and place bet. Perhaps he could even dip as low as 8-1 and still remain decent odds. Given his recent fade though, bettors need good value before taking a shot on him.

Use Annapolis alongside Uncaptured Spirit in multi-race wagers.