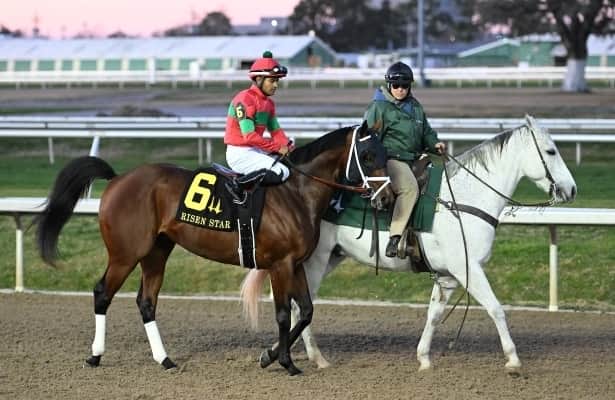 Finding the right value horse in the Grade 3, $150,000 Harlan’s Holiday Stakes at Gulfstream is an interesting challenge. According to the morning line, O’Connor enters as the 8/5 favorite, with more familiar entries such as Skippylongstocking listed as the 4-1 second choice and Simplification at 5-1.

The line feels illogical and makes O’Connor seem underlaid. O’Connor owns a Group 1 win from Chile in the Gran Premio Latinoamericano (G1), but most bettors know Chilean racing is a step below the standard of racing here.

To put the race in perspective, O'Connor did receive a nice pace setup and the competition behind him felt weak. Will the public favor this former South American off his local win over Octane? Octane won the Marion County Florida Sire Stakes at Tampa Bay in his next start.

Skippylongstocking last ran ninth in the Pennsylvania Derby (G1), which might explain why the oddsmaker chose to make him only 4-1 on the morning line. Before the Parx flop though, he ran well in various graded stakes races and even hit the board in one of the Triple Crown races.

Back in August, Skippylongstocking won the West Virginia Derby (G3) at Mountaineer over the slop. But Skippylongstocking also shows good efforts over fast dirt, as he ran third in the Belmont Stakes behind Mo Donegal and Nest, and third in the Wood Memorial Stakes (G2) behind Mo Donegal and Early Voting. Even his fifth-place finish in the Preakness Stakes was not a bad effort.

Now Skippylongstocking drops to a Grade 3 on his home track where he broke his maiden and won an optional claiming race. If the gap between O’Connor and Skippylongstocking is 8-5 and 4-1 during live wagering, it will come as a surprise to see a 3-year-old who ran fairly well against the best 3-year-olds in the country left alone against lesser horses on a familiar course.

The same comment applies to Simplification, who also has campaigned against the best 3-year-olds and shows a local Derby trail win.

Earlier in the year, Simplification won both the Mucho Macho Man Stakes and Fountain of Youth Stakes (G2) on this track, as well as finish second in the Holy Bull Stakes (G2) and third in the Florida Derby (G1) after a fast pace.

Simplification then closed for a credible fourth in the Kentucky Derby, before running a disappointing sixth in the Preakness and third by 6 1/4 lengths in the West Virginia Derby to Skippylongstocking. Maybe the slop affected him at Mountaineer.

In September, Simplification ran well in the Pennsylvania Derby (G1) against quality competition with a fourth-place finish that came after chasing a fast pace set by White Abarrio. But then Simplification threw a clunker by finishing seventh in the Breeders’ Cup Dirt Mile.

Now Simplification drops to a Grade 3 on his home track where he won the Fountain of Youth and Mucho Macho Man. This colt will look appealing at 5-1 off those credentials and course familiarity. But are those 5-1 odds realistic?

Perhaps it makes sense to search beyond those three runners.

The one guaranteed value in this race is Pioneer of Medina, who is listed as 6-1 on the morning line and may hold at those odds as the forgotten horse.

In his most recent start, Pioneer of Medina won an optional claiming race on Nov. 17 at Churchill Downs by half a length over Warrior Johny in second. Before knocking Warrior Johny as his competition, consider that Warrior Johny sometimes turns in good races, such as when he won a Saratoga allowance race back in August by 8 1/2 lengths with a 121 TimeformUS Speed Figure.

Earlier in the year, Pioneer of Medina finished fourth in a loaded Risen Star Stakes (G2) and third in the Louisiana Derby (G2). Epicenter easily handled the field in both prep races, and then went on to finish second in both the Kentucky Derby and Preakness before his Travers Stakes (G1) win.

Pioneer of the Medina ran a dismal 19th in the Kentucky Derby. He went on a layoff and came back in the Smarty Jones Stakes (G3) at Parx, where he threw another clunker with a last-place finish by 18 lengths. Pioneer of Medina then wound up in a Keeneland optional claimer and threw another bad race by finishing eighth. He almost seemed headed towards the claiming ranks.

Despite those bad return efforts, trainer Todd Pletcher never lost faith and become rewarded with Pioneer of Medina's win at Churchill Downs last time. The way Pioneer of Medina fought in the stretch to prevail signals that he has woken up and shaken off the rust. Plus, Pioneer of Medina won at the same mile and one-sixteenth distance as this race.

The three final choices in this analysis are Pioneer of Medina, Simplification and O’Connor. Maybe wait to bet Skippylongstocking on top at a longer distance with mud or slop.

Given his promising efforts on the trail last spring, Pioneer of Medina clearly owns some ability. Maybe the time has come for Pioneer of Medina to break through as an older horse. With another step forward on Saturday, he can move in that direction and establish himself as a 2023 threat in dirt routes for older horses.

In this race, Pioneer of Medina only needs to break a little sharper and keep clear of traffic. Otherwise, he has a good chance to upset the obvious horses.