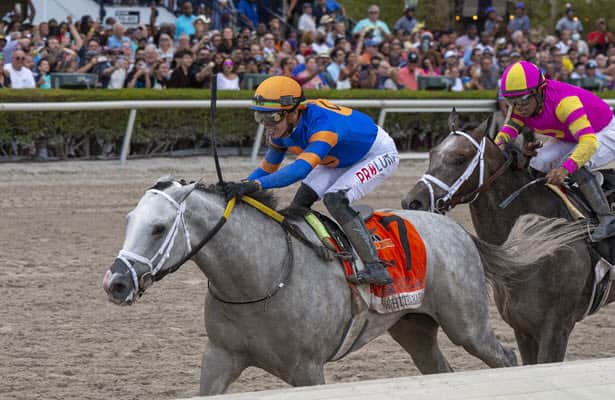 Deciphering the pace scenario in the Grade 3, $150,000 Ohio Derby on Saturday at Thistledown does not seem too difficult. On paper, there are three main speed horses and they might run anywhere from moderate to slightly fast early.

The three main speed horses are Classic Causeway, Pineapple Man and Brigadier General. But none of them resemble the crazy kind of speed horse.

Classic Causeway did set faster fractions under pressure before he won the Sam F. Davis Stakes (G3) in February, and he set a moderately fast pace in the Florida Derby (G1) in April before folding under pressure from Simplification. But he does not show any races where he went insane.

When Classic Causeway competed in the Kentucky Derby, he could not keep up with the suicidal pace after starting off in 13th and 9 3/4 lengths behind the pacesetter through the opening quarter.

As for Pineapple Man, this son of Gormley switches between setting the pace and playing the presser. In his May 30 effort in a state-bred Belmont allowance race, Pineapple Man took up the pressing role through fractions of 22.80 and 45.86 seconds for a one-mile race, which seem fast at first glance. But TimeformUS does not apply the fast label to those fractions.

In fact, none of Pineapple Man’s early fractions from his five career races feature any red labels from TimeformUS. He never even reaches 120. For those who do not use TimeformUS, the “too fast” range starts at 140.

Brigadier General used the pressing style in his last two starts as well. In his May 14 effort in a Keeneland maiden race, he pressed the pace through fractions of 23.54 and 47.60 seconds for the 1 1/16-mile distance before going on to capture his first win.

By the way, forget about Brigadier General’s fade to fourth in a May 12 Churchill Downs allowance race through slow fractions of 24.54, 49.47 and 1:14.60. At 1 3/16 miles, the race was just a little out of Brigadier’s General’s range. If nothing else, those fractions reinforce the idea that Brigadier General is not eager for a fast pace.

The colt that stands to benefit from these three moderate speed horses is White Abarrio, who prefers to stalk the pace in a normal route race. Because of the 20-horse field and suicidal pace, forget about his non-threatening Kentucky Derby effort. In an eight-horse field at nine furlongs, this gray colt is a threat in most dirt races for 3-year-olds.

In this race, White Abarrio should find himself about two or three lengths behind Classic Causeway, Pineapple Man and Brigadier General.

If Classic Causeway sets the pace with Brigadier General and Pineapple Man right next to him pressing, they can weaken each other just enough to allow a stalker such as White Abarrio to take advantage. At the same time, those three main speed horses are probably not going to collapse the front either, which leaves out the morning-line favorite Tawny Port.

Tawny Port is a good closer who won the Lexington Stakes (G3) at Keeneland. For him, the main problem is his early position. Tawny Port might find himself near the back of the field in this eight-horse field. Those tactics worked in the Lexington, but those were weaker horses.

White Abarrio also brings class to this race as the Florida Derby (G1) winner. The third-place Simplification went on to finish fourth in the Kentucky Derby, while the fourth-place Pappacap ran second twice to Jack Christopher in the Pat Day Mile (G2) and Woody Stephens Stakes (G2).

Although Saffie Joseph Jr. excels mainly at Gulfstream Park or the NYRA circuit, he did train Math Wizard to a second-place finish in this race three years ago.

With a moderate pace ahead of him as a close-range stalker and past credentials as a Grade 1 winner, White Abarrio looks like a logical choice.