Analysis: Why Jack Christopher is a poor Breeders' Cup bet 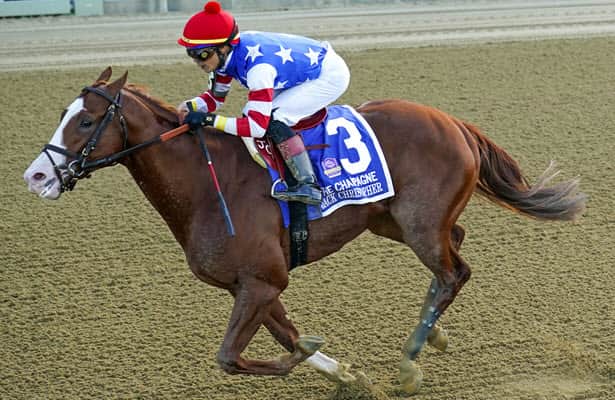 After winning his first two races including the one-mile Champagne Stakes (G1) at Belmont Park, Jack Christopher stands as the expected favorite for the Breeders’ Cup Juvenile at Del Mar in November.

But there is pause for concern about the new challenges facing him, including the longer distance and added turn.

[Analysis: Fast pace may not eliminate speed in BC Classic]

Remember the old handicapping rule to bet against a favorite attempting something new? Here is a 2-year-old horse attempting two turns for the first time while stretching out to the 1 1/16-mile distance. While those obstacles are fine to accept at a higher price, is taking 7-5 or less fair?

Heading into the Juvenile, there is hype surrounding Jack Christopher’s figures for the Champagne. His speed figure appears high on both Beyer and TimeformUS. But sound handicapping goes beyond looking at the highest figures.

Just last year, Jackie’s Warrior went into the Breeders’ Cup Juvenile as the heavy favorite off four straight one-turn wins, including a flashy five-and-a-half-length romp in the Champagne Stakes, as well as wins in the Hopeful Stakes (G1) and Saratoga Special (G2). On paper, he was impressive minus the lack of two-turn tries or 1 1/16-mile route experience.

After stalking a fast pace and briefly making the lead, Jackie’s Warrior faded to fourth and lost by 3 1/4 lengths at odds of less than even money. For those odds, one expects the horse to overcome the pace from a stalking position.

Jackie’s Warrior tried two turns and 1 1/16 miles again in the Southwest Stakes (G3) earlier this year and faded to a distant third in the slop.

A few years ago, Jack Christopher’s trainer Chad Brown sent Complexity to the 2018 Breeders’ Cup Juvenile at Churchill Downs off a three-length win in the Champagne. Complexity did offer a bit more value at 5-2 odds.

Regardless, the lesson about not trusting big Champagne winners in the Breeders’ Cup Juvenile remains the same. Because the Champagne is a one-turn mile, some sprinters end up handling the one-mile distance more easily. When they switch to a two-turn configuration, some horses who handle the one-turn mile do not translate that form to two turns.

When Complexity competed in the Juvenile, he secured an uncontested lead through fractions of 23.24 and 46.87 fractions. But he offered nothing late and folded to 10th and 20 lengths behind Game Winner.

For the rest of his career, Complexity competed as either an elongated sprinter or one-turn miler. In his final start, he tried two turns again last fall in the Breeders’ Cup Dirt Mile at Keeneland and faded to fourth.

When watching the replay of Jack Christopher’s Champagne, he did well to separate from most of the field on the turn and put away Gunite.

Late in the stretch though, Commandperformance was gaining ground.

Not every closer improves on the stretchout, but in this case, it is not hard to imagine Commandperformance improving with the switch to two turns and 1 1/16-mile distance. He could step forward in the Breeders' Cup if Jack Christopher finds the extra distance too far.

In the Juvenile, Jack Christopher also could find a more difficult pace opponent in the Bob Baffert-trained Corniche. Baffert is unlikely to rate Corniche, which makes the pace scenario an interesting one. Does Jack Christopher leave a Baffert pacesetter alone and attempt to get him on the turn again, such as when he put away Gunite in the Champagne, or does he attack earlier? It might prove harder to put away Corniche.

In terms of pedigree, Jack Christopher leans toward sprinting.

His sire Munnings can sire routers such as Bonny South, Warrior’s Charge and Munnyfor Ro. But there are also plenty of sprinters among his active progeny, including Kimari, Jaxon Traveler, Bolder, Venetian Harbor and Ginobili.

On the bottom side, Jack Christopher’s dam Rushin No Blushin is a half-sister to the familiar sire Street Boss. In his career, Street Boss was a consistent sprinter during the synthetic era. His career best victories came in the Triple Bend Invitational Handicap (G1) and Bing Crosby Handicap (G1).

Some horses can overcome their breeding. On paper, though, it looks like Jack Christopher is more suitable for sprinting or a one-turn mile.

Even though Jack Christopher might continue the momentum and win his third start in a row in the Breeders’ Cup Juvenile, his value on top looks questionable. There is usually not only one possible winner of each race. Rather, there are at least a few potential winners. The bettor's job is to compare the value in odds to the horse’s chances and make a final decision on bets with that information in mind.

In any case, there are better options than Jack Christopher in win bets and in vertical wagers for the Breeders’ Cup Juvenile.