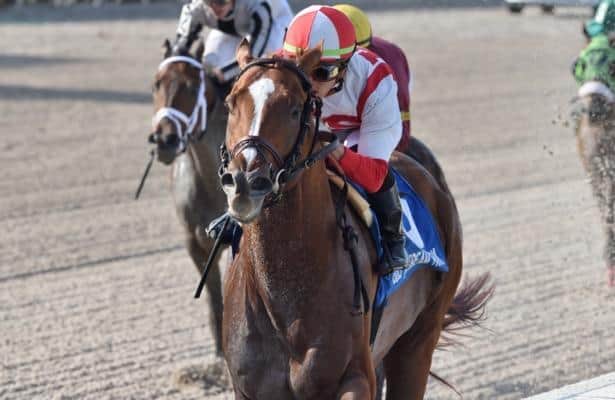 Even though Saturday's Grade 1, $250,000 Carter Handicap at Belmont attracted 11 entries, the right horses to use are unfortunately the most well-known runners -- minus one. While there are some young, promising 4-year-old sprinters in here, this field lacks a clear standout on top and the longshots do not look enticing enough to take a chance on them.

Of those at single digits on the morning line, Network Effect might offer some intriguing value, even though Chad Brown trains. He's an 8-1 shot and not likely to fall too low given the ungraded company he kept in his two recent starts.

Last month, Network Effect took the Big Drama Stakes at Gulfstream by two lengths after waiting to find room. When a path opened, he won under mild urging at best.

The most interesting part is the beginning of the race. Network Effect initially broke fast enough to take the lead before conceding the front as they completed the opening quarter.

When horses flash improved gate speed yet are willing to rate, that is a great sign.

To start off his campaign, Network Effect also finished runner-up in a Gulfstream allowance optional claimer on March 28, losing by half a length to Wind of Change.

The loss is forgivable for three reasons. For one, Wind of Change enjoyed on an uncontested lead, and even an inferior speed horse can convert that kind of scenario into a win. Also, Network Effect stumbled early in the race and needed to work himself into position. As a last reason, Network Effect competed off a layoff and likely ran short.

Given Network Effect makes his third start off the layoff, he is supposed to turn in a peak performance. He is the most interesting choice at a bit of a price.

Performer is the second option to discuss.

At first glance, Performer is an obvious horse to include. This 4-year-old son of Speightstown comes into the race on a four-race winning streak. He ended the 2019 season with an impressive 1 ¼-length win over Tax in the Discovery Stakes (G3). Cutting back is not a problem, either, as his maiden win and Saratoga allowance score came in sprints.

In an almost pace-less race, Performer owns the speed to secure a good, upfront position. From Post 2, it is not hard to imagine him sitting in the pocket early.

To add some caution, the 189-day layoff is a concern, as trainer Shug McGaughey is not known for firing off the bench. But for those who want to counter that argument, why would McGaughey start Performer in a Grade 1 off a long break unless he was ready? And the Carter was the original plan when it was scheduled for early April. Performer has had two more months to get fit.

Expect his odds to dip below 3-1. Regardless, Performer is too sharp to ignore and a must-use in multi-race wagers.

Vekoma enters the Carter off a promising 3 ¾-length win in the Sir Shackleton Stakes at Gulfstream on March 28, earning a mild 113 TimeformUS Speed Figure in his return effort.

Cross out the Kentucky Derby flop. For some horses, the demanding 20-horse Derby is an outlier, especially if the horse cannot handle the 1 ¼-mile distance.

Vekoma makes his second start off the bench and sticks to seven furlongs. He also offers speed. Vekoma is a major contender.

Also a 4-year-old colt, this runner makes his third start of the year after wins in the Toboggan Stakes (G3) and Tom Fool Handicap (G3) at Aqueduct to kick off his season. In the latter race, he closed to win by 1 ¼ lengths after stumbling early and running wide on the turn.

Mind Control also comes into this race off a three-month layoff. But he did fire off a 147-day layoff in the Toboggan, although he needed to work hard to defeat Nicodemus.

In terms of class, Mind Control won the Allen Jerkens Stakes (G1) last summer at Saratoga by a nose over Hog Creek Hustle and the talented Shancelot. Despite his Grade 1 credentials, Mind Control never wins with a fast figure. He tends to prevail if the race lacks a major star, or if that star fails to fire.

With that said, the Carter lacks a standout star. If Mind Control can work out a trip from midpack, he could find himself in the mix late.

Mind Control is the fourth horse to use in multi-race wagers.

How do bettors save money? Toss out Firenze Fire.

The 5-year-old Firenze Fire makes his first start for trainer Kelly Breen after spending his entire career with Jason Servis. While Firenze Fire loves Belmont and owns a 5: 3-1-0 record on this course, no one knows if he can perform the same under Breen.

If he turns in a good effort, then perhaps use him next time.

Network Effect is the best value, while Performer, Vekoma and Mind Control are horses to consider using as well in the Carter. On the surface, this is a large field with many options. But those four runners are the classiest horses on paper and deserve first priority.