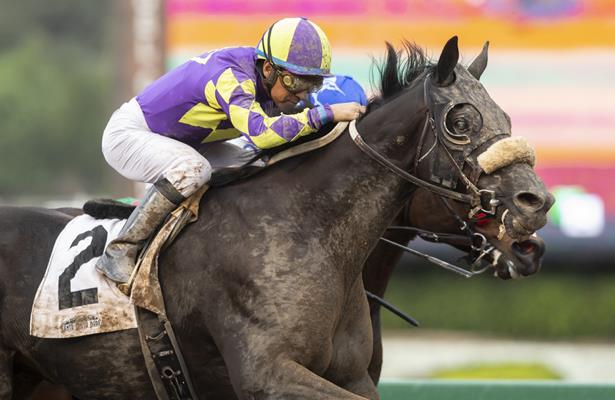 Maximum Security enters the Grade 2, $150,000 San Diego Handicap on Saturday at Del Mar as the heavy favorite and deserves it. For his old trainer Jason Servis, the 4-year-old New Year’s Day colt put together quite the record in 2019 by crossing the wire first seven times in eight starts, with three Grade 1 victories.

However, this is a new situation for Maximum Security. Because of the charges surrounding Servis, including giving Maximum Security and other horses in his barn performance enhancing drugs, owner Gary West gave him to trainer Bob Baffert.

For most handicappers, switching from Servis to Baffert is a lateral move with no consequence. Baffert is not invincible though. Remember the 2017 San Diego Handicap (G2)? Arrogate started at 1/9 with over $1.4 million to show on him.

After Arrogate failed to threaten on the turn though, jockey Mike Smith gave up and stopped urging. As Arrogate quit, Accelerate pulled clear by 8 ½ lengths.

Arrogate finished fourth and a dismal 15 ¼ lengths behind.

In this San Diego, on the surface there is no horse of Accelerate’s quality besides the established Maximum Security. Then again, Accelerate did not resemble the final version of Accelerate before the 2017 San Diego. Only one start prior, Accelerate had run third in the Precisionist Stakes (G3), 15 ¾ lengths behind.

Can any horse here make the same turnaround as Accelerate in 2017? It took a while to come up with this selection, but one interesting option is Midcourt.

Midcourt turned in a poor race in the Hollywood Gold Cup (G1) in his most recent start, finishing fifth by 23 ¾ lengths. There are a few notes to points out though.

For one, Midcourt initially hopped in the air and started last.

From that point, he had trouble getting into the race.

Midcourt tried to secure a better position inside, but the room was tight. After that point, Victor Espinoza lost ground on purpose and took Midcourt to the outside.

In the clear, Midcourt briefly moved forward and looked possible to threaten for a piece. But, then he stalled on the turn and threw in the towel as Improbable won.

Toss the race out. The poor start and switching around from inside to outside probably affected him enough to quit in the stretch. He also lacked blinkers.

Earlier in his form, Midcourt turned in some sharp races with blinkers on. For example, Midcourt captured the local Native Diver Stakes (G3) by 5 ¾ lengths last December with a 123 TimeformUS Speed Figure. That effort generated some hype.

Afterwards, Midcourt started in the San Antonio Stakes (G2) at Santa Anita. The public bet him down to a low 2-1, and he disappointed with a flat third-place finish.

Midcourt rebounded though with a 3 ½-length score in the San Pasqual Stakes (G2) and another 123 on TimeformUS, equaling his Native Diver number. He then ran a credible third in the Santa Anita Handicap (G1) with a 120, losing by ¾ of a length.

On his best day, Midcourt is capable of a big performance. Perhaps his best race is not as good as Maximum Security’s best effort, but few bettors thought the other horses in the 2017 San Diego could touch Arrogate either. Anything can happen.

Because of the uncertainty surrounding Maximum Security and how he will handle the trainer switch, Midcourt is the choice, or at least the co-choice.

To give Maximum Security credit, it is hard to knock anything about his form under Servis. This horse wants to win, and he brings his “A” game to any surface.

On Feb. 29, Maximum Security displayed a ton of heart and determination to capture the Saudi Cup by ¾ of a length over Midnight Bisou without Lasix. Unfortunately, the purse money has been withheld pending a private investigation into Servis by Saudi track officials. But assuming he won fair, it was a great effort.

Last year, Maximum Security also captured the Florida Derby (G1), Haskell Stakes (G1) and Cigar Mile (G1) to close out his successful campaign. He also crossed the wire first in the Kentucky Derby, before a disqualification knocked him down to 17th.

Obviously, if Maximum Security duplicates his form under Baffert, he wins.

But that is a question. Maximum Security’s morning workouts show him passing his workmates in the stretch, but Baffert has been pairing him with lesser stablemates such as Dark Prince, Once On Whiskey and Midnight Mystery. He is supposed to finish stronger than weaker runners such as those, otherwise he is in deep trouble.

What about Higher Power’s chances? He finished a good second to Improbable in the Hollywood Gold Cup, and did capture the Pacific Classic (G1) on this course. The question is whether Higher Power needs a longer distance than 1 1/16 miles, as the type of move he makes looks more steady and even, and that favors more ground.

As for Combatant, he posted a mild upset in the Santa Anita Handicap (G1). But in his most recent start, he finished a dismal 10th in the Oaklawn Handicap (G2). For those taking a closer look at Combatant, the Oaklawn effort is forgivable as he experienced some trouble in the 13-horse field and likely became discouraged.

None of Combatant’s races truly stand out though. At least in Midcourt’s past performances, there are some races that leave an impression visually.

Ax Man is a pace presence. Can he take pressure from his stablemate Maximum Security and last the entire way? That is a tall order. His best chance is if Maximum Security tries for surprise rating tactics, which might leave Ax Man uncontested. Given Baffert trains both speed horses now, the possibility is there for a change.

Dark Vader and Sharp Samurai complete the field, but even if Maximum Security fails to fire and leaves the door open, neither of them appear talented enough.

Midcourt is the main choice based on value and ability. Use him alongside Maximum Security, just in case the big favorite is not the same.

Midcourt is also playable as a show bet if the public creates a bridgejumping situation. In other words, if Maximum Security attracts big money (six figures and 90-pecent of the overall amount) in the show pool, bet another horse to show.