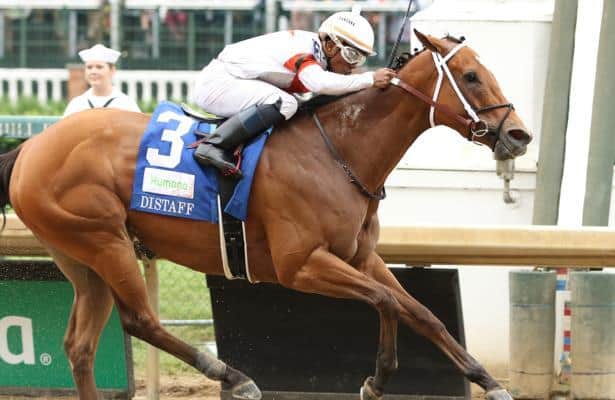 For bettors, the Grade 1, $250,000 Madison Stakes at Keeneland is not the most appealing race at first glance with Guarana’s presence at expected even money odds. Before conceding Saturday's race to Guarana, however, consider the cases for Mia Mischief and Bell’s the One, who both exit the Winning Colors Stakes (G3) at Churchill Downs.

Trained by Steve Asmussen, Mia Mischief has compiled $1.22 million in a relatively long 22-race career. Her stakes wins last year came in the seven-furlong Humana Distaff (G1), followed by the Roxelana Stakes and Dream Supreme Stakes in the fall. All three of those wins came at Churchill Downs, but she is capable of performing at other tracks.

To start off this campaign, Mia Mischief built upon a modest March 20 optional claiming win with a 4 ½-length score against a stacked field in the Carousel Stakes at Oaklawn. TimeformUS gave Mia Mischief a 118 for the Carousel victory.

One month later, Mia Mischief went into the Winning Colors Stakes at Churchill Downs as the deserving 4/5 favorite off the Oaklawn win.

After chasing the pace set by Break Even and looming large at the top of the stretch, Mia Mischief failed to offer any further late response.

As Mia Mischief struggled to pass Break Even, Bell’s the One took advantage of the fast pace from several lengths behind.

Two also-rans out of the Winning Colors won next time.

Sneaking Out, who faded to fifth after stalking the pace inside, returned to upset the Great Lady M Stakes (G2) at Los Alamitos over Breeders’ Cup Filly & Mare Sprint runner-up Bellafina. She won by three-quarter lengths with a 114 on TimeformUS.

Also, the fourth-place Unique Factor remained at Churchill Downs to close for the win in a June 28 optional claimer, earning a 111.

Both Sneaking Out and Unique Factor were part of the first group in the fractured Winning Colors field, with four lengths separating Unique Factor and the sixth-place Bell's the One early on. When the field is fractured into two clear groups, it usually indicates a fast pace.

In all likelihood, Mia Mischief showed no punch in the lane because she chased a fast pace set by Break Even. This theory is backed up by Sneaking Out and Unique Factor returning to win their next starts, as they needed to run fast to keep up with that first group and ultimately fared well enough to remain in the Top 5, rather than fold completely.

In this spot, there is no Break Even. Amy’s Challenge is entered with speed, but Mia Mischief already handled her before in the Carousel.

Mia Mischief is a worthy option to use alongside Guarana, or against her.

What about Bell’s the One?

While Bell’s the One took advantage of the pace, she looked too strong in the stretch to discount her chances.

Cross out Bell’s the One’s Feb. 25 turf attempt in the Mardi Gras Stakes at Fair Grounds. Also cross out the fifth-place finish in the La Brea Stakes (G1) last December, as not every horse handled Santa Anita’s quirky dirt surface.

Last October, Bell’s the One won the local Raven Run Stakes (G2) at the same distance, giving her no excuse to not handle Keeneland dirt. Also, Keeneland dirt is one of the most fair dirt tracks in the country. While every dirt course favors speed to some degree, this one is more even.

If Amy’s Challenge, Mia Mischief and Guarana go too fast early on, Bell's the One could benefit again and pass them all in the stretch.

Guarana is also obviously capable. She received a 115 TimeformUS Speed Figure for the June 4 comeback win at Churchill Downs, where she pulled away by 5 ¼ lengths. It is reasonable to expect improvement off the 115.

Last year, Guarana took the Acorn Stakes (G1) by six lengths and Coaching Club American Oaks (G1) by one length, making her a two-time Grade 1 winner. She was also runner-up in the Cotillion Stakes (G1) after surviving a hot pace and only getting passed by a closer.

No one will get a deal at even money or less, but Guarana can win.

In other words, the Madison comes down to Mia Mischief, Bell’s the One and Guarana. All of them figure to go off at single digits, with Bell’s the One the highest priced out of those because of the low-profile trainer and doubts about the pace scenario setting up again. Use all three of those names in multi-race wagers and move on to the next race.