Analysis: Merveilleux could post a mild surprise in Queen's Plate 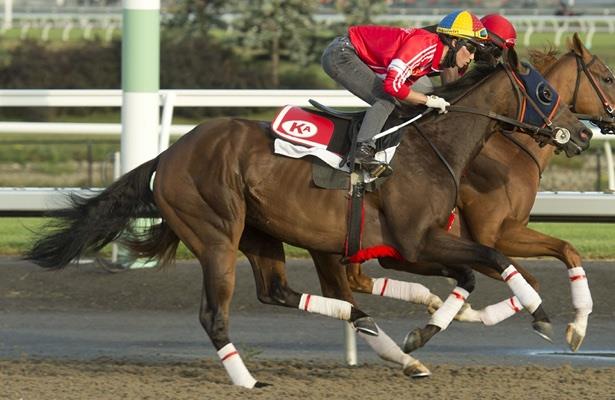 Given the successful history of fillies in the $1 million Queen’s Plate at Woodbine on Saturday, it is no disadvantage to choose one in the historic race. This edition of the Queen’s Plate features two fillies: Merveilleux and Curlin’s Voyage, with the latter filly the Woodbine Oaks winner on this course last month.

From a betting perspective, Merveilleux is the more interesting play at a higher price. With sharp works and a good prep race in tow, she is capable of moving forward at 10 furlongs and upsetting her more popular stablemate Clayton.

Merveilleux ran a closing third in the Woodbine Oaks, losing by 2 1/4 lengths to Curlin’s Voyage. However, the effort is better than it looks on the running line as she dealt with traffic.

Watch Merveilleux on the far turn.

As Curlin’s Voyage makes the first move on the inside, Merveilleux follows along on the inside and needs to wait behind Justleaveitalone.

Instead of slipping inside, Merveilleux goes around Justleaveitalone. At the top of the stretch, Justleaveitalone comes out slightly once Merveilleux runs next to her. Merveilleux does move forward anyway and makes up ground on Curlin’s Voyage and Afleet Katherine in second. But the final thrust comes too late and she ends up third.

Prior to the Woodbine Oaks, Merveilleux also ran a closing fourth by 1 3/4 lengths in the Selene Stakes, took a local allowance win in June and lost to Curlin’s Voyage by a head after an exciting stretch battle in the Ontario Lassie Stakes back in December, earning a 107 on TimeformUS in the latter race.

Also on Sept. 5, her stablemate Clayton shows a 48 2/5 four-furlong workout, over a second slower than Merveilleux.

Merveilleux figures to move forward with more distance and offers value at anything close to her 10-1 morning line. She is the main choice.

Clayton does not need an explanation for most handicappers.

Last November, Clayton broke his maiden locally by 7 1/2 lengths. On synthetic, destroying a field by seven lengths is not easy because of the nature of the surface.

On July 18, Clayton won a local optional claimer by only three lengths. But the win is more stunning upon watching the replay, as 8 1/4 lengths separated the runner-up Elusive Knight and third-place finisher Finalist. As I have stated numerous times, strung-out margins signal a quality race, especially on synthetic or turf.

Then, Clayton took the Plate Trial by only half a length last month. It felt like Clayton was about to blow by Halo Again and Dotted Line. But Clayton fails to switch leads in this effort and does only enough to win.

Yet, Clayton gallops out nicely along with Dotted Line.

Despite Clayton working to capture the Plate Trial, he still won over two nice horses in Halo Again and Dotted Line. Perhaps he just forgot to switch leads in the heat of the battle. Note that he did switch leads in his July 18 win.

Clayton is a contender, and probably the one Merveilleux needs to mow down. Expect his presence in the stretch run, whether or not he wins.

For a third option, Dotted Line is another one to consider.

Dotted Line set the pace in the Plate Trial with pressure from Halo Again, before Clayton passed both in the stretch run and Dotted Line weakened slightly to third.

His true running style is hard to pinpoint. In the Marine Stakes (G3), Dotted Line made a decent move from sixth to complete the trifecta behind Shirl’s Speight. Prior to that, he stalked the pace in the seven-furlong Queenston Stakes before fading to fifth. That poor effort came off a 213-day layoff.

Perhaps Dotted Line runs better as a stalker or mid-pack type in longer routes. He shows a career-high 109 TimeformUS Speed Figure for his third in the Marine, higher than Clayton’s 108 in the optional claimer or Merveilleux’s 107 in the Ontario Lassie.

For what it's worth, Pace Projector projects Dotted Line in seventh early. Maybe the algorithm is a bit off, but he figures to settle at least a few lengths off the leader this time. He could surprise bettors who wrote him off for fading to third in the Plate Trial.

Merveilleux is the one who gives the best impression of a stamina-oriented router, though, and she is working fast. If room opens in the stretch run, she can upset the field at a nice price.

In multi-race wagers, Merveilleux, Clayton and Dotted Line are the three horses to use. If looking to save money, then cut off Dotted Line or use him as a C only.

Vertically, Merveilleux is high enough odds for a win or place wager.