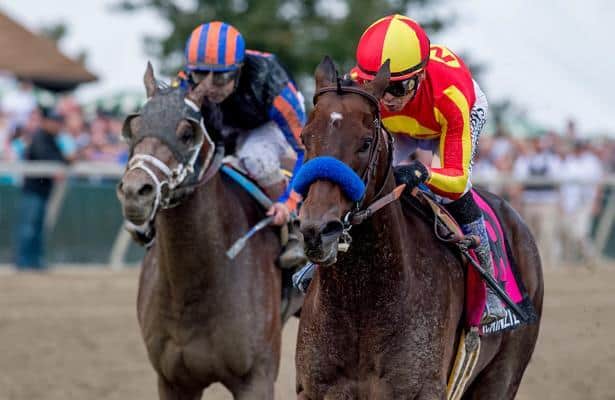 Given a fast expected pace, Wednesday's Grade 1, $300,000 Malibu Stakes at Santa Anita Park will set up for either a stalker or closer, preferably one capable of a big speed figure. With all the talent lined up, including four Bob Baffert runners, a lower-class horse probably cannot steal this one even if the race runs favorably.

For me, that criteria narrows down the field to two horses, McKinzie and Axelrod.

Using TimeformUS, McKinzie is no stranger to posting 120-plus speed ratings. The Street Sense colt registered a 120 or higher in four of six lifetime races, with the high point coming in the Pennsylvania Derby (G1) when he earned an excellent 129 for the win. McKinzie then regressed to a 97 in the Breeders’ Cup Classic when a fast pace cooked him early on and he faded to 13th. Because of the pace, it is forgivable race.

For those who prefer Beyer Speed Figures, McKinzie shows two numbers above 100. Beyer awarded him a 101 for crossing the line first in the San Felipe Stakes (G2), but a controversial disqualification handed the win to Bolt d’Oro. For the Pennsylvania Derby, McKinzie earned a sharp 107 Beyer Figure, which matches Triple Crown winner Justify's best Beyer.

As for McKinzie’s early position, while there are exceptions, a horse used to a routing pace will not keep up as well in a seven-furlong sprint because the pace quickens. McKinzie likes to press the pace routing, but his kind of speed should place him a few lengths off in the Malibu.

Of course, the problem with McKinzie is value. The horse is popular with fans and bettors alike, and the odds show he has never started a race higher than 7-2. With Mike Smith riding this Baffert-trained colt, expect him to hold as the betting favorite.

Value players might side with Axelrod, who is 10-1 on the morning line. His connections are not as well known, which makes him more attractive in terms of wagering.

On TimeformUS, Axelrod only shows one number above 120. The Warrior’s Reward colt threw up a 127 while finishing second to McKinzie in the Pennsylvania Derby before regressing to a 118 in the Breeders’ Cup Classic when he finished ninth.

But the Breeders’ Cup effort is not as bad as the finishing position suggests.

Axelrod makes a nice move on the far turn. His rally starts at around 1:10 in the video when he catches up with a fading Pavel, and then he gradually ranges up outside and places himself in sight of leaders Mendelssohn, Accelerate and Thunder Snow.

After all that great work, Axelrod came up empty.

Maybe the 1 ¼-mile distance proved too far for him. A closer inspection of Axelrod’s pedigree reveals a sprint-oriented bottom side. For example, the dam Volatile Vickie made 14 career starts, and 12 of them came in sprints. Axelrod’s most successful sibling, Trelawny, made 85 starts, and 59 of those races were sprints.

Cutting back to seven furlongs should place Axelrod toward the back of the field, and if the pace develops as the TimeformUS Pace Projector suggests, he will fire.

Which other stalkers or closers are classy enough win?

Still Having Fun and Seven Trumpets are underneath types. Chad Brown-shipper Identity Politics falls into this category, too, but his ceiling is higher than those two.

Kanthaka brings some back class as the San Vicente Stakes (G2) as the Lazaro Barrera Stakes (G3) winner, although he fails to show one TimeformUS number above 120.

Solomini could fire in his return. Last December, he crossed the line first in the Los Alamitos Futurity (G1) over McKinzie before a four-race losing streak from March through June and a subsequent layoff afterward. He is a bit unreliable.

Greyvitos finished fifth by six lengths in his return race and oddly lacked speed in that disappointing performance. Is he switching to a stalker role? He looks kind of interesting taking his past races before the layoff into consideration, but he needs to improve significantly given his last two TimeformUS Speed Figures - 95 and 93.

Nero could win if the fast pace fails to pan out. He endured a brutal pace scenario in the San Vicente Stakes while holding second place, arguably running better than Kanthaka. Nero also needs to improve off his return win at Del Mar, as he only earned a 107 TimeformUS Speed Figure. Previously, he scored a 118 in the San Vicente.

Ax Man shows one of the most obvious sprint pedigrees in this race, at least on the bottom side. His half-sister, Indian Blessing, won the 2007 Breeders’ Cup Juvenile Fillies, but she always looked more comfortable sprinting. She ended up taking the 2008 Prioress Stakes (G1), Test (G1), Gallant Bloom (G2) and La Brea Stakes (G1).

Yet, the connections tried Ax Man in four route races, and managed to win an optional claimer at Santa Anita and the Sir Barton Stakes at Pimlico. His form went south afterwards though, as he finished a fading third by 12 lengths in the Matt Winn Stakes (G3) and third by five lengths in the 1 1/8-mile Los Alamitos Derby (G3).

Returning to seven furlongs could wake up Ax Man, if he can endure the pace. His form shows he loves to contest the pace no matter the distance, making him lack versatility.

In contrast, in McKinzie’s only sprint attempt he began the race fifth.

Despite earlier warnings about using Breeders’ Cup horses in their return races, I prefer McKinzie and Axelrod in this spot. A full field will help the odds, and the nature of this race -- the final Grade 1 of the year restricted to 3-year-olds -- means all connections should be in to win, not prepping for a bigger spot. At double-digit odds, Axelrod is worth a win/place bet, and both horses are Pick 4 inclusions.