Analysis: Maximum Security's consistent, but is he improving? 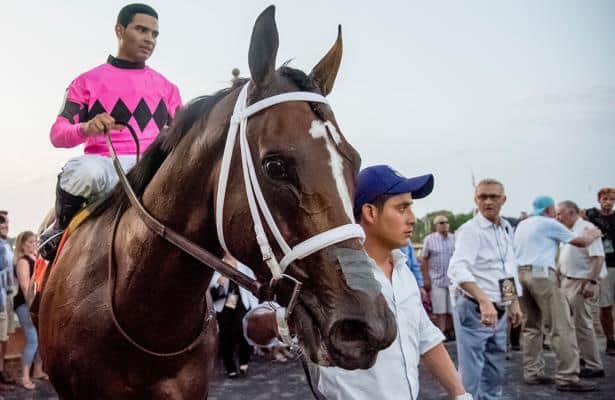 But, does scoring five straight 100-plus Beyers mean Maximum Security is the best 3-year-old in training in terms of ability? That remains debatable.

For one, Maximum Security was defeated once despite registering a 100 Beyer in the Pegasus Stakes by King for a Day, who earned a 102 in last month's victory. The latter was unlucky in the Haskell to draw a poor post position and find trouble inside, as Maximum Security himself may have had a role in forcing his old foe to take up through the far turn.

Given King for a Day’s Pegasus effort, it's not difficult to believe that other top 3-year-olds can post a 102 on any given day and beat Maximum Security’s usual 100-102. As consistent as Maximum Security remains, his nubers do not show improvement off the 102 Beyer he earned on Feb. 20 in a seven-furlong race.

If he fails to progress in the late summer or fall, a few other names could still pop up with big numbers and challenge Maximum Security for a championship.

For example, before Omaha Beach scratched out of the Kentucky Derby, he won the Arkansas Derby (G1) as his final prep race with a 101 Beyer.

Earlier in the year when he kept fading in Derby trail races, it looked like Mr. Money wanted to cut back to sprints or one-turn miles. This again looked like the case when he romped in the Pay Day Mile (G3). But after watching him in the Matt Winn and Indiana Derby, he might prove capable going longer and should get the opportunity to prove it soon.

Game Winner is still in the mix as well. He earned 96 and 97 Beyers when second in both the Rebel Stakes (G2) and Santa Anita Derby (G1).

Although Game Winner earned a 96 again when finishing a closing sixth in the Kentucky Derby, it is hard to take the figure seriously as his best race given the poor trip. Game Winner began the Derby in 18th and 19 lengths behind the leader. He cut down the margin to 3 ¾ lengths.

Then Game Winner won a mildly paced Los Alamitos Derby (G3) with another 96 Beyer. But to counter that, it is difficult to believe Game Winner tried his best against those slowpokes and off a layoff.

Plus, King for a Day could throw up another 102. Even though he backed up slightly on the turn in the Haskell before Maximum Security interfered, his jockey, John Velazquez, was upset, believing he had more horse left.

King for a Day only needs to draw outside the speed next time and secure the same pressing position that won him the Pegasus.

In fairness to Maximum Security, it is possible his Beyers are not accurately outlining his progression. TimeformUS awarded Maximum Security a 128 in the Haskell, and that is after adjusting a 125 for pace. Given the 20-point difference between DRF and TimeformUS, the unadjusted 125 is still three points higher than a 102 Beyer, meaning there is slight disagreement.

It is up to the handicapper to trust the right speed figures. This writer believes both of them are capable of error.

But if those Beyer Speed Figures are accurate, then it's fair to question Maximum Security's progress since February.

At a minimum, it feels like Maximum Security requires one more step forward in order to contend in the Breeders’ Cup Classic -- and that's plenty possible as 3-year-olds mature. To emphasize how dull the repeated 100-102 Beyers looks in comparison to older horses, Preservationist earned a 108 Beyer in his breakout Suburban Stakes (G2) earlier this month.

Without a doubt, Maximum Security is the 3-year-old male division leader. But given those stagnant speed figures, in the bigger picture he is not far ahead of the other top 3-year-olds. On a race-by-race basis, if he draws inside of talented speed again, there's reason to go against, too.