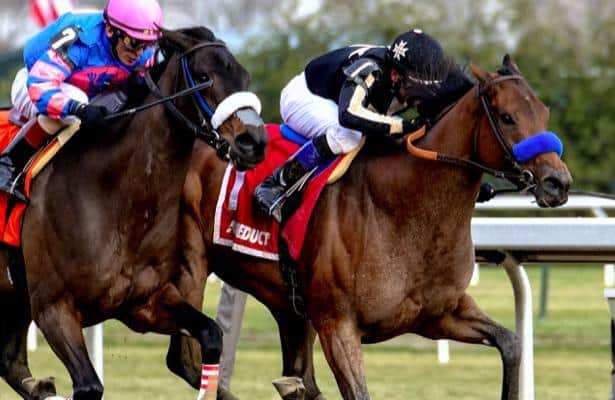 As backwards as this initially sounds, the Breeders’ Cup name in past performances poses a psychological barrier to handicappers because the most natural betting inclination is to use horses who competed in major races. Unfortunately, many Breeders’ Cup horses represent a poor betting opportunity at underlaid odds when they return.

For example, only a few days ago Vibrance finished a flat sixth by 10 lengths in the Starlet Stakes (G1) at Los Alamitos one month after running third in the Breeders’ Cup Juvenile Fillies. Before the Starlet, bettors knocked her down from 5/2 on the morning line to 2-1.

But the argument here is not that Breeders' Cup horses never win coming back. Out of the Breeders’ Cup Filly & Mare Sprint, three fillies including Marley’s Freedom, Happy Like a Fool and Highway Star ran back, and all three horses won their return. Yet, the three fillies went off at 2/5, 3/5 and 2/5 in their next starts, offering no value.

How can players spot an over-bet or vulnerable returning Breeders’ Cup horse? Every situation is different, but there are a few key questions to ask when handicapping.

For one, is the first race back an afterthought following for the Breeders’ Cup?

Most trainers sharpen their horses specifically for the Breeders’ Cup, expecting them to peak on that day. While the race afterward is important, if the horse already ran in the Breeders’ Cup and returns quick, there is probably some fatigue involved.

Maybe Vibrance’s connections hoped she could go one more race when she needed a break. While she looked good in the post parade, the poor result signaled tiredness.

Perhaps the clearest example is Mendelssohn, who I admittedly liked in the Cigar Mile (G1) along with Copper Town. The connections did not originally plan the Cigar Mile, but they wanted that elusive dirt Grade 1 for him before retiring the half-brother to Beholder. He finished a flat fourth with no real excuse.

Previously, Mendelssohn ran a fine race in the Breeders’ Cup Classic when he set a fast pace for 1 ¼ miles and kept trying late for a brave fifth. Given the level of competition and the hot fractions, he ran well. Maybe he emptied out the tank.

Some Breeders’ Cup horses will take more time to return, and in those cases bettors must ask themselves, “What is the goal for this horse?” If the horse is making a comeback in an allowance or optional claiming event, or even a lower-level stakes race, is the goal to win or only to get the engine started again?

Last year, Good Magic won the Breeders’ Cup Juvenile at Del Mar and did not appear again until March, when he competed in the Fountain of Youth Stakes (G2). While the pace worked against him, the Curlin colt ended up a disappointing third at 3/5.

Of course, it all makes sense when considering the main goal for any good 3-year-old horse is the Kentucky Derby in May. Good Magic fired back with a sharp win in his final prep race one month later when he took the Blue Grass Stakes (G1) at Keeneland, before turning in a solid second to eventual Triple Crown winner Justify in the Derby.

Trainer Chad Brown did not need to empty out Good Magic’s tank for the Fountain of Youth. The smart trainer only wanted to get a race into him to get the ball rolling again.

Before the race, Brown is even quoted on at the Daily Racing Form as saying, “We want him to run a really good race, want him to get something out of it, but don’t want a really hard race."

"Hopefully, he can bounce out of it ready to move forward.”

Although Brown also said, "We're running to win," a good handicapper can figure out the true meaning of quotes. In most cases, when a trainer explains, “We … don’t want a really hard race,” it means the trainer is running a short horse off a long layoff.

For example, on Aug. 11 Derby Date finished second in a Saratoga maiden race at 6-1. As a maiden, he then went on to run eighth and last in the Hopeful Stakes (G1), before finishing a slightly improved fifth in the Breeders’ Futurity (G1) at Keeneland.

Did Derby Date belong in the Breeders’ Cup? He finished a woeful 11th at 74-1, before finally reverting back to a Churchill maiden race and running fifth at 3-1. His Breeders’ Cup line is irrelevant because he made no impact losing by 21 ½ lengths, but that did not stop bettors from making him the second choice next time against maidens.

Some trainers enter horses in major races like the ones in the Breeders’ Cup hoping for good luck, while knowing their actual chances are slim to none.

When a horse returns from the Breeders’ Cup, bettors must also ask, “Is there an emerging horse entered that can challenge for the win?”

Chasing Yesterday won the aforementioned Starlet, and she skipped the Juvenile Fillies. After Chasing Yesterday flopped in the Spinaway Stakes (G1) at Saratoga over the summer, Bob Baffert probably felt she needed more time to develop before getting thrown in a difficult Breeders’ Cup race.

Chasing Yesterday ran as the favorite in the Starlet, too, but the point is, the timing of the Breeders’ Cup does not always work out.

If true, that is smart strategy. Some trainers and owners realize pointing toward an easier graded stakes race in late November or December is more logical, especially when some horses such as Mendelssohn will feel the effects of the Breeders’ Cup.

For that reason, quality horses in good form who skipped the Breeders’ Cup are worth a look in late November and December graded stakes races. It is their big race.

But again, this post is not recommending to ignore all returning Breeders’ Cup horses. A number of them will come back successfully, usually at short odds. They're still talented runners.

Rather, it is a cautionary analysis, to show that those horses are overvalued.

The stock market advice “buy low, sell high” applies in horse racing, as it is preferable to wait for an opportunity to pick the emerging horse in a race involving a vulnerable Breeders’ Cup runner. In some cases, the Breeders’ Cup horse cannot lose, but keep looking and the chance to cash against one will occur.