Analysis: Malathaat is not unstoppable – here are 3 reasons 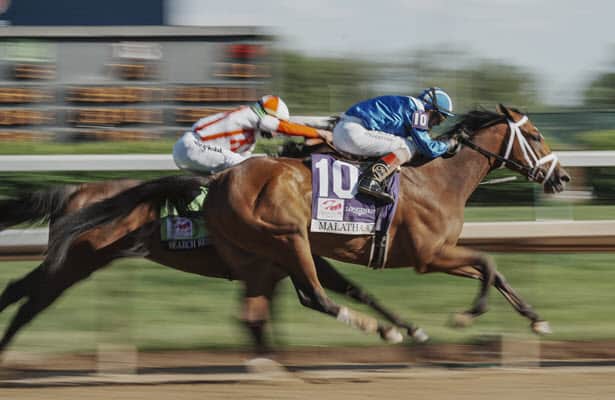 Malathaat is listed as one of the probable starters in the Grade 1, $500,000 Coaching Club American Oaks on Saturday at Saratoga Race Course. Although Malathaat is currently the rightful leader of the division, she does appear beatable.

There are three reasons to doubt Malathaat's invincibility in the Coaching Club American Oaks. She might hate running on the inside, she usually wins by small margins, and she shows modest speed figures at best.

Malathaat’s distaste of either the slop or inside path (or both) could be seen in the Demoiselle Stakes (G2) last December. On the backside, it is clear that she ws not traveling well and almost seemed ready to back up right before the half-mile point. John Velazquez needed to continuously work on Malathaat so she would not fade into a worse position.

On the replay, watch Velazquez’s right hand after the first turn. He was urging the filly along despite Malathaat not enjoying the position.

As they hit the top of the stretch, though, Velazquez found a path to tip out Malathaat, and then she looked ready to fire. After Malathaat built momentum in the clear, she steadily wore down the leader Millefeuille and won by 3/4 of a length.

At no point did Malathaat start moving well until she was tipped outside in the stretch. For most of the race, Malathaat gave the impression of a struggling filly, either because of eating dirt on the inside or the slop.

In both the Ashland Stakes (G1) and Kentucky Oaks, Malathaat traveled on the outside throughout the backside and seemed to run comfortably for the most part. For some horses, firing on the outside is their game.

The small margins are another weakness.

Malathaat won the Demoiselle by only 3/4 of a length over Millefeuille. Perhaps the small margin is forgivable because of the inside trip. In Malathaat’s return race in April, she won the Ashland Stakes (G1) at Keeneland by only a head over Pass the Champagne. But maybe Malathaat felt a bit rusty coming off the winter layoff.

Well, Malathaat won by only a neck again in the Kentucky Oaks over Search Results after an exciting stretch battle. She keeps winning by small margins in these graded stakes races, and at some point it will catch up.

Watch as Malathaat needed an all-out effort to prevail in the Kentucky Oaks.

Only three lengths behind them were Will’s Secret and Clairiere.

If Malathaat can beat Search Results by only a neck in a clean race, then it is hard to call her unstoppable in any race with other good fillies present. In dirt racing, a winning margin by a neck almost does not mean anything other than it counts for an official win. Plus, Malathaat held the better rallying position on the outside, as opposed to the rail.

In the future, all it could take is one miscue or another inside trip for Malathaat to lose, even if she fires in the end. If Search Results is present, or if another filly such as Pass the Champagne runs the race of her life, then one miscue will cost Malathaat because she is not lengths better. She is only a small margin better than whoever fires that day.

This filly holds no margin for error, and that is not the sign of a dominant filly.

Everyone loves discussing numbers and speed figures. In the Kentucky Oaks, Malathaat ran a 116 TimeformUS Speed Figure, and that is not scary at all. Yet the 116 equals Malathaat’s career high figure on TimeformUS. Search Results went on to win the Acorn Stakes (G1) with a 114, which means the 116 is likely correct since it backs up the figure.

Previously, Malathaat earned a 106 in the Ashland, a 98 in the Demoiselle and a 100 in the Temped Stakes at Aqueduct last November. Malathaat dominated the Tempted field by 7 3/4 lengths, but she beat a weak group.

With all that said, Malathaat is the best 3-year-old female dirt router. Her accomplishments this year in winning the Ashland and Kentucky Oaks are undeniable, and she deserves the top spot in this division.

But Malathaat’s hold on the top is not strong. This week, it might only take a move forward from Clairiere or another improving filly to bring Malathaat her first loss. Search the past performances for one or two fillies within range of Malathaat's form. With the spring season in the past, it would not come as a surprise to see changes in the division.