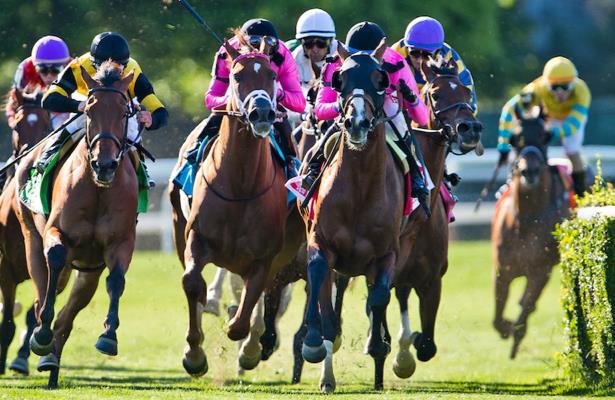 European form is not easy to handicap because it requires more research and video work to get a base feeling for a horse. Regardless, the first part of this post will focus on Magic Attitude and her chances in the Grade 1, $250,000 Belmont Oaks Invitational. She is an overseas transfer from trainer Fabrice Chappet to Arnaud Delacour. The second part of this post will discuss the other former European, Neige Blanche.

The Belmont Oaks at 1 1/4 miles is carded as the fifth race on Saturday with a post time of 3:04 p.m. Eastern.

Based on her record in Europe and the fillies she competed against, Magic Attitude gives the impression that she can defeat top U.S.-based contender Antoinette, who is exiting a gate-to-wire win in the Aug. 16 Saratoga Oaks Invitational. At a minimum, it does not hurt to take a closer look at Magic Attitude's three races this year.

In May, Magic Attitude won the nine-furlong Prix Vanteaux (G3) at Longchamp Racecourse in France by two lengths over Emoji and Flighty Lady. Those two fillies completing the trifecta are not great runners, but the win was a good starting point.

One month later, Magic Attitude gave the 1 ¼-mile Prix Saint Alary (G1) a chance. With the slower pace of the longer distance, Magic Attitude did not settle well for most of the race. She took the lead briefly in the stretch, but ultimately ran second when five lengths behind Tawkeel.

Tawkeel won the Prix de la Nonette (G2) in her next start, while the fourth-place Vaucelles took the Prix de Malleret (G2). While those were Group 2 races, the common notion is that Group 2 racing in Europe equals Grade 1 American turf racing. Plus, Tawkeel already did win the Prix Saint Alary, making her a Group 1 winner.

Then on July 5, Magic Attitude tried the 1 5/16-mile Prix de Diane Longines (G1). This time, she settled in last and bided her time in the early stages.

In the stretch, Magic Attitude made a mild run for fifth.

If nothing else, she only lost by three lengths behind a good group.

The winner Fancy Blue won the Nassau Stakes (G1) next time out while defeating Magic Wand among others, before running third in the Matron Stakes (G1).

Third-place Peaceful finished second in the Matron Stakes, just ahead of Fancy Blue and behind a rising European star in Champers Elysees.

Fourth-place Raabihah took the Prix de Psyche (G3) in his next start, before running second in the Prix Vermeille (G1).

If Magic Attitude can transfer that form to North America under trainer Arnaud Delacour, she is capable of defeating Antoinette. If Antoinette tries to put the field to sleep on the lead, Magic Attitude figures to adjust and keep her in close range. If the pace is too fast, she can also lay back as shown in the Prix de Diane Longines.

At the morning-line odds of even money or higher, Magic Attitude is the choice. If not Magic Attitude, then Neige Blanche could provide the best value.

Similar to Magic Attitude, Neige Blanche is a European transfer. She now resides in the Leonard Powell barn and made her North American debut in the Del Mar Oaks (G1), turning in a mild stretch rally for fourth, 2 ½ lengths behind Red Lark.

On the negative side, Neige Blanche let an average filly in California Kook outkick her late and she did not pass Warren’s Showtime either despite a clear path. Perhaps she needs more distance than nine furlongs though.

Neige Blanche is the second choice, but can be upgraded to the top pick if Magic Attitude becomes an underlay.

Is Antoinette a candidate to win again? Sure. It is possible she secures the lead and takes them all the way once again. In the Saratoga Oaks, she even took pressure from Enola Gay before putting her away on the turn and holding on late.

However, Antoinette is not a special talent. Remember, she lost her four previous starts this year before breaking through in the Saratoga Oaks. At 9/5, she is too low to get excited about betting her.

Magic Attitude is the top choice, with respect given to Neige Blanche too depending on the live odds. Given the short field and low odds all around, another option is to skip the race, as it is not part of the late Pick 4. For early Pick 5 players though, consider those two fillies.