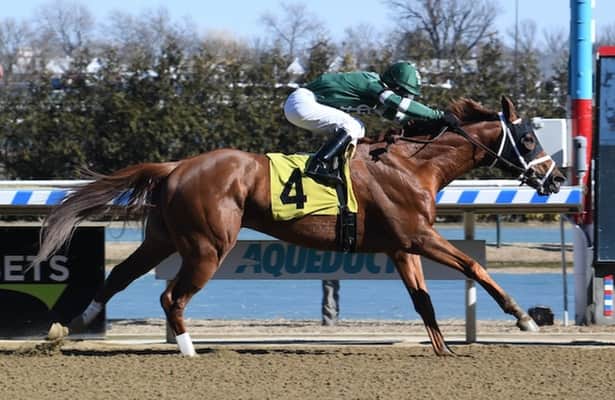 Some horseplayers do not agree with the need for the Curlin one day before the Jim Dandy, but it does provide a stepping stone for horses not ready to tackle the better horses in the division. This edition of the Curlin is also a good betting opportunity with a somewhat slow favorite.

First Captain enters this race as the undefeated morning-line favorite, with three wins in three starts. In his most recent start, he won the Dwyer Stakes (G3) at Belmont. Before that stakes win, First Captain took an allowance race and broke his maiden on the same track.

But First Captain is not fast. On TimeformUS, he shows gradually improving figures of 106, 107 and 108. Those numbers do not eliminate his chances to win the Curlin Stakes, but he is too slow to trust alone.

Who is the runner-up, Ridin With Biden?

As for the third-place Snow House, he is not great either. In his most recent start before the Dwyer, he won a May 29 allowance optional claimer at Churchill Downs over a weak group that included runner-up Wayakin, who previously had broken his maiden in a claimer and ran in two starter allowance races before losing to Snow House.

In fairness, First Captain could take a step forward, especially at nine furlongs with his breeding. He runs in a professional manner. But given his undefeated record and the popularity of trainer Shug McGaughey, the price on First Captain is likely to remain fairly low.

One other option to consider is Miles D, who is listed at 10-1 on the morning line despite the high-percentage Chad Brown as his trainer.

Miles D broke his maiden by only 2 1/4 lengths on June 12 at Belmont, but he shows a 106 TimeformUS Speed Figure with room to improve as a colt with two starts. He is only two points off First Captain. In that maiden race, he also won with a grinding style that is perfect for nine furlongs. Notice how Miles D only gradually separated himself late.

His pedigree strongly hints at wanting a longer route distance. On the top side, Miles D’s sire Curlin is unquestioned as a stamina influence. On the bottom, Miles D’s dam side shows a classic Phipps line that traces back to the great Personal Ensign as the third dam. Miles D also has Personal Ensign’s successful daughter My Flag as his second dam.

My Flag won the 1996 Coaching Club American Oaks (G1) at 1 1/4 miles, as well as the Gazelle Stakes (G1) at nine furlongs a few months later to highlight her season.

Although Miles D lacks experience, he is supposed to handle nine furlongs with his blood.

Also consider that Miles D has been working in company with his stablemate Pipeline, who made a step forward in his most recent race on July 28. Pipeline had set the early pace and got caught only in the last strides to Vindictive in a nine-furlong maiden race. On XBTV, Miles D and Pipeline are shown working on July 10 and 16.

If Miles D sticks to his 10-1 morning line odds, he will offer great value. He is still acceptable at 6-1 or higher.

The last runner to discuss is Dynamic One, who returns off a three-month layoff after an 18th-place finish in the Kentucky Derby. He lost by 32 1/4 lengths.

Cross out the Derby effort. For many horses, it is an outlier.

Before the Kentucky Derby, Dynamic One threw up a good effort in the Wood Memorial Stakes (G2) at Aqueduct by making a wide move on the far turn and briefly taking the lead in mid-stretch. His stablemate Bourbonic ran him down, but Dynamic One arguably ran the best race.

Before the Wood Memorial, Dynamic One broke his maiden at nine furlongs at Aqueduct by 5 1/4 lengths. He clearly thrives at this longer route distance.

As for Dynamic One, he is also a good betting option, considering his graded stakes experience and preference for nine-furlong races. Also note the work in company with the stable star Malathaat on July 4. Neither of the two workers went that fast, but they both moved well.

Can any of these horses win the Travers? Sure, most of these horses are still developing and can move forward in this race and the Travers. If the connections side with the Curlin as the prep race, though, it usually means the horse needs more time to develop before tackling the best.

Whether a Curlin runner can win the Travers depends on who shows up in the Travers and how good the Curlin ends up looking visually and in terms of speed figures. Those steps forward need to happen quickly.

If Miles D’s odds remain high enough, he is the one to think about for win and place bets. Even though this is his stakes debut, the Curlin field is not very strong and he can move forward at the longer distance.

For multi-race wagers, Miles D, First Captain and Dynamic One are usable.