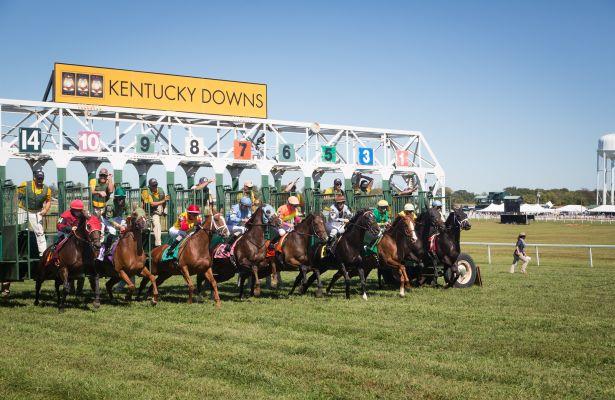 As pointed out in Tuesday’s post, stalkers and closers won almost every race on Sept. 7 at Kentucky Downs. Even though the trend might change soon, here are two good closers to consider on Thursday for the two major stakes races on the card — the $500,000 Dueling Grounds Oaks and $750,000 Dueling Grounds Derby.

Given the 1 5/16-mile distance, choosing a filly with stamina is important. All the elevation changes make this a demanding journey.

From a visual standpoint, the filly with the most stamina is How Ironic, who enters off a 3 1/4-length victory in an allowance race at Ellis Park. Granted, she did not face a strong field in that race. For those who can watch the replay, watch the brief gallop out video. After the finish, she continues to separate from the field and does not look tired.

And How Ironic is not without stakes experience.

In March, How Ironic closed for sixth in the Sanibel Island Stakes at Gulfstream, only 1 1/4 lengths behind Stunning Sky in fourth. She gave herself too much work left and likely wanted more than one mile.

At least she never stops running in the stretch.

For what it's worth, How Ironic also gallops out with Stunning Sky in the brief post-race footage, indicating she was ready to give more and only ran out of ground.

Besides the Sanibel Island effort, How Ironic also shows a closing fourth in the Florida Oaks (G3) earlier in March. Once again, she came too late in the stretch.

Does the recent Ellis Park victory indicate a new filly? If nothing else, letting How Ironic stomp over weaker foes gives her added confidence and reinforces the goal of winning, and not just coming home late and finishing strongly for a minor piece.

Harvey’s Lil Goil and Stunning Sky are logical contenders too.

The former recently ran third in the Alabama Stakes (G1) behind a sharp Swiss Skydiver and won the Regret Stakes (G3) in her turf debut at Churchill Downs.

As for the latter, Stunning Sky appears capable of running all day too. While she was only eighth in the Regret, she ran a strong second in both the 1 1/8-mile Lake Placid Stakes (G2) and 1 3/16-mile Saratoga Oaks Invitational.

In contrast to Harvey's Lil Goil and Stunning Sky, though, How Ironic is 20-1, making her a better value. In other words, she is probably close enough to them in ability to take a shot at a longer price.

His past performances might not generate excitement at first, with a recent third-place finish in a Saratoga allowance and second in a Belmont optional claimer. But it deserves a closer inspection.

To prove the stamina part, he lost his first five starts at 1 1/16 miles or less before finally getting his first win in a 1 1/4-mile maiden special weight at Belmont.

Then he ran in the Belmont optional claiming race. Cutting back to nine furlongs, Shamrocket ran a closing second to No Word and lost by a neck.

One race later, No Word was third in the Saratoga Derby Invitational, only a half-length behind Domestic Spending and 1 1/4 lengths ahead of Decorated Invader.

As for Shamrocket’s third-place effort in an Aug. 9 allowance race at Saratoga, he comes into the picture too late. Admittedly, the finish is kind of disappointing as he had a clear shot on the outside. Instead of exploding late, Shamrocket gradually keeps making up ground.

Perhaps the stretchout helps Shamrocket. With some of this field not likely to handle the thicker grass, odd turns and elevation changes, he might outlast them.

The favorite Bama Breeze enters off two sixth-place finishes in the Transylvania Stakes (G3) and Saratoga Derby Invitational. At 3-1, he is on the borderline of fairly priced. If the public bets him down any further, then he represents a slight underlay.

Second choice Peace Achieved ran a non-threatening fourth in the Caesars Stakes at Indiana Grand, losing by four lengths. On the plus side, the winner Fancy Liquor went on to capture the American Turf Stakes (G2) at Churchill Downs, and Peace Achieved also owns a stakes win over this course, at one mile.

Those runners are still usable, but Shamrocket is the preferred horse at 6-1. Unfortunately, those are the three lowest horses on the morning line. Sometimes picks work out that way, as not every race contains an interesting 20-1 shot.