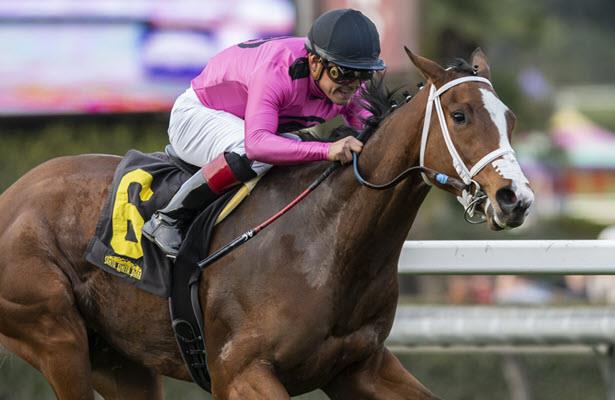 Laura’s Light headlines the Grade 1, $250,000 Del Mar Oaks on Saturday, a nine-furlong turf route for 3-year-old fillies. She owns successful experience at this distance and tactical speed, two factors that are supposed to make her trustworthy. But she never wins by a clear margin, and she offers little value.

Regardless, bettors need to use Laura’s Light based on her win in the Honeymoon Stakes (G3) at Santa Anita at the same distance. She did almost everything right, from not taking the early runoff bait to moving at the right moment on the turn.

Initially, Laura’s Light goes to the front under a hold, but Parkour wants it more and opens up a surprising double-digit length lead.

Laura’s Light settles well in second, 10 lengths behind Parkour. But she also keeps a nice two-length advantage between her and the third-place filly, Fashion Royalty.

On the far turn, Laura’s Light slices into a fading Parkour and takes command. Under a drive, she then holds off challenges from Stela Star and Croughavouke to win by a neck. It is not a dazzling performance, but she does what she needs to do without making unforced errors.

Laura’s Light went on to compete in the one-mile San Clemente Stakes (G2). In that race, she also rated in second off a more sensible pacesetter in Cheermeister and took over again on the far turn. She won by 3/4 of a length over a fast-closing Guitty.

But again, these are not mind-blowing performances. Laura’s Light is the most probable winner in this spot because of her tactical speed and experience at nine furlongs, but with a perfect trip she is not several lengths better. She is only the best horse by a narrow margin.

This is a logical race to spread on multi-race wagers.

Previously, Red Lark ran second against Toinette in the Wilshire Stakes (G2) and fourth in the Honeymoon behind Laura’s Light, with some trouble late. With Red Lark’s past races in mind, she gives credibility to Carpe Vinum and California Kook in that optional claiming race.

Carpe Vinum drew Post 1, and California Kool starts from Post 2. Both of these fillies can save ground and use tactical speed to stay in range.

Warren’s Showtime is another filly to consider. This Cal-bred has switched between dirt and turf in her 11-race career, and she shows nine trifecta finishes in all of those starts.

In her most recent effort, she ran third in the San Clemente behind Laura’s Light and Guitty, losing by only 1 1/4 lengths. Three starts ago on turf in the Fran’s Valentine Stakes, open to older Cal-bred fillies and mares, she hung around in third and ended up third, 2 1/2 lengths behind Super Patriot.

Notably, Warren’s Showtime shows a field-high 110 TimeformUS Speed Figure for that Fran’s Valentine effort against older runners. But can this filly handle nine furlongs? Given she also won at 1 1/16 miles on dirt in the Melair Stakes, the extra footing is likely not a problem.

Warren’s Showtime is the fourth recommendation.

What about the European invaders?

Miss Extra won the Prix de Sandringham (G2) in France, but the field she beat is questionable. Notice the runner-up Golden Crown ran last in the Prix de Bagatelle in her next start. Miss Extra herself went on to finish ninth in the Prix de Diane Longines (G1), before the transfer to trainer Richard Mandella in California.

But this field is weak enough that Miss Extra is usable. A ninth in the Prix de Diane Longines might equal a win in this Del Mar Oaks.

If the budget allows for Neige Blanche, she is also usable. Using all six horses above is expensive, though. Perhaps bettors can narrow it down.

Red Lark is also in this race. As stated earlier, Red Lark gives some credibility to Carpe Vinum and California Kook because she lost to those fillies and also shows some decent efforts prior to that race. With that in mind, why would those two fillies lose to Red Lark in this spot, let alone Laura’s Light? Limit her to underneath spots.

Also think about using Guitty underneath too. She is liable to close and pick up a piece again, as she did in the San Clemente against Laura's Light. With that said, Guitty's wide Post 11 draw is a negative in this two-turn route.

The Del Mar Oaks is a complicated race, even with a top selection.

Laura’s Light is the tepid choice because of her speed and ability to win at this distance. But, as shown above, there are several win contenders. Find the single in a different leg and spread far and wide in here.