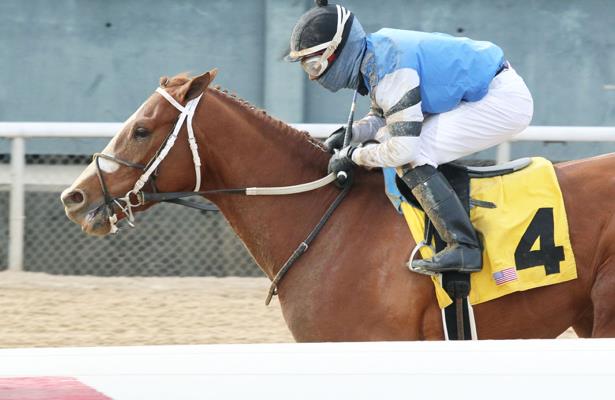 Most value-minded horse players do not like it when public handicappers pick the same horse. When it comes to betting, the less attention given to a longshot, the better.

With that point in mind, it might come as a mild disappointment to see me picking Laughing Fox to upset in the second division of Saturday's Grade 2, $750,000 Rebel Stakes at Oaklawn Park.

From reading others' early comments on this race, there's a common theme in tabbing Laughing Fox as one of the biggest threats to unbeaten champion Game Winner in the field of 10. He will only gain momentum in the next two days.

But even if the expensive Union Rags colt picks up attention from a few writers, there is reason to believe his value can hold. Too many more highly regarded horses are present, making it almost impossible for Laughing Fox to go off as lower than fourth choice.

For example, start with Game Winner, who is 4-for-4 with three Grade 1 wins already. Game Winner comes into this race off a significant layoff, and his January work tab looked irregular. He also appeared sloppy in a Feb. 8 work in company with stablemate Speed App, but trained sharper in recent weeks with a tighter schedule.

The layoff will not discourage bettors enough from keeping him a heavy favorite, as this is an undefeated Bob Baffert star likely to start off even money or less.

Next on the probable order of public choice is Omaha Beach, who broke his maiden in the slop by nine lengths on Feb. 2 at Santa Anita with a 115 TimeformUS Speed Figure and 90 Beyer Figure, one month after losing to the highly regarded Nolo Contesto.

Also note Omaha Beach’s half-sister, Take Charge Brandi, which will not go unnoticed. Their dam, Charming, is a half-sister to multiple Grade 1 winner Will Take Charge.

With Mike Smith hopping on board Omaha Beach for trainer Richard Mandella, it is almost certain the public will keep him at second choice, or third choice at worst.

The expected third choice is less obvious, but it should go to Our Braintrust or Gunmetal Gray. The former finished third by a neck in the Withers Stakes (G3) at Aqueduct and second to Mind Control in the Jerome Stakes, giving him enough credentials to fall behind Game Winner and Omaha Beach in betting.

Trainer Mark Casse had a tough time last weekend in Derby preps with flops from Dream Maker and Skywire, but he is still a well-known trainer who the public will trust in Derby preps, and he is winning at a decent clip at Oaklawn.

Gunmetal Gray comes into this race with a runner-up finish to Mucho Gusto in the Robert B. Lewis Stakes (G3) and a victory in the Sham Stakes (G3) at Santa Anita. Last year, he also finished second to Game Winner in the American Pharoah (G1).

While Gunmetal Gray’s speed figures are light this year, the public will not ignore him, either. His credentials and graded stakes experience look too strong on paper. Plus, the popular Jerry Hollendorfer trains this late closer, further cementing his lower odds.

Fans will back Laughing Fox’s trainer Steve Asmussen, too, but the difference is that this horse does not own a class advantage or “wow” factor present in Omaha Beach.

Then why choose Laughing Fox?

Whatever this colt lacks in flashiness, he makes up in professionalism.

In his local Feb. 18 optional claiming win, he initially broke awkward and settled 10-lengths behind, a lot farther than his usual opening position in previous races.

However, Laughing Fox steadily rallied along the inside and split horses on the turn without hesitation. He then faced an eye-to-eye challenge from Sleepy Eyes Todd in the stretch run, but eventually proved best as he repelled that foe to win the race.

Furthermore, TimeformUS awarded Laughing Fox a competitive 113, amazingly 31 points higher than his race two starts ago when he broke his maiden.

Why was the maiden speed figure slow?

Like with Country House’s slow maiden win at Gulfstream Park, before he ran second in the Risen Star Stakes (G2), Laughing’s Fox maiden figure was affected by a slow pace.

Early leader Passion Play took them along uncontested in 24.03, 48.68 and 1:14.59, with the last fraction marked blue on TimeformUS. Laughing Fox did not settle too far behind in fourth, but by the third fraction, it was too late to earn a fast final time.

In any case, this is a slow-developing horse who is rounding into top form.

The maiden and optional claiming wins also make Laughing Fox 2-for-2 at the Rebel's 1 1/16-mile distance, and he draws the No. 2 post, which gives him another preferred inside trip.

Remember, Game Winner’s connections do not need to win this race. He already sits high on the Derby qualifying points list with 30, already enough to get in the field some years. The time to take a shot against the juvenile winner is now, before he reaches peak fitness.

A few months ago, the Juvenile looked like a decent field with Signalman winning the Jockey Club and Mind Control taking the Jerome Stakes.  As time goes on, there's more reason to doubt it.

With all that said, however, Game Winner remains a top threat. But if he needs one race, Laughing Fox will be there taking a trip behind the projected pace.

For horizontal players, Laughing Fox works as either an A or B option.

I might play a Pick 3 or 4 with Game Winner, Gunmetal Gray and Laughing Fox as As, and Our Braintrust as a B since he tends to hang. A win/place bet sounds tempting, too, if Laughing Fox's odds can stay at 8-1 or higher, which I believe will happen..

It was only a few years ago that the viral Ylvis tune asked, “What does the fox say?” After this race, I hope it's, “I’m a Rebel Stakes winner.”