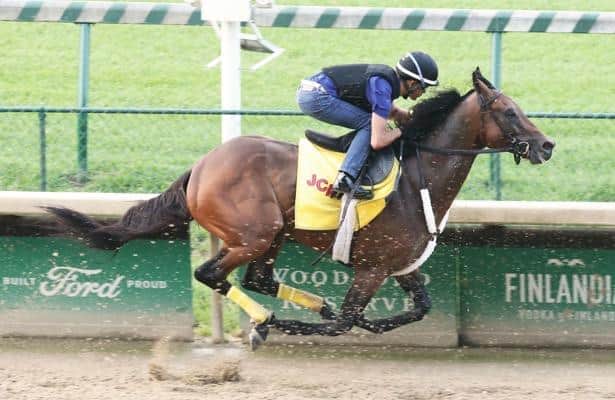 From a betting standpoint, the Grade 1, $250,000 Cigar Mile on Saturday at Aqueduct is tough. The best horse starts on the morning line at an unappealing 7-5, while the second best on paper enters off a 217-day layoff and brings questions of soundness into the race after skipping the Kentucky Derby.

Despite the layoff and physical concerns, the 3-year-old King Guillermo does offer a case for bettors trying to beat the heavy favorite Performer.

To start off, King Guillermo is already proven at the top level, at least against 3-year-olds. He was a strong second in the second division of the Arkansas Derby (G1) back in May at Oaklawn Park to Nadal, who ran like an unbeatable horse en route to his three-length victory.

King Guillermo earned a 120 TimeformUS Speed Figure for his runner-up finish to the former Derby favorite, which is only two points off the 122 Performer picked up in his recent return win. Based on expected growth, consider that King Guillermo is possibly a strong and faster horse than in May too.

Also, King Guillermo took the Tampa Bay Derby (G2) off a 98-day layoff back in March, winning by 4¾ lengths over the more stakes-experienced Sole Volante in second. For that effort, King Guillermo shows a 112 on TimeformUS, which is a fine figure for a 3-year-old colt in March.

Firing off a seven-month layoff in a Grade 1 race is more difficult than capturing a Grade 2 after three months away from the races, but the task is not impossible if the connections aim specifically at the Cigar Mile. Given this is possibly a fragile horse with more layoffs coming, it makes sense for trainer Juan Carlos Avila to take his best shot now.

As a last point, the pedigree sides with King Guillermo on slop.

King Guillermo’s dam Slow Sand is a half-sister to Funny Duck, the winner of the 2018 Pat Day Mile (G1) over slop. He lost his final nine starts after that upset win. In addition, King Guillermo's sire Uncle Mo hits at a 19 percent clip with his progeny on wet dirt (according to BRIS), giving this horse no reason to not handle the expected rain.

From post No. 6, King Guillermo can either set the pace in a race that lacks speed, or he can settle into pressing or stalking position if necessary.

Although his top ranking in this analysis is a reluctant one given the red flags surrounding the layoff, King Guillermo is the selection.

Instead of diving right into a Grade 1, he took a Belmont optional claiming race Oct. 17 in easy fashion by 1¾ lengths. Note the 12¾-length gap between the runner-up Musical Heart and Empty Tomb. In dirt racing, spaced-out finishing margins are a good sign.

As stated above, Performer earned a 122 on TimeformUS for the comeback win. He also earned a 129 in last year’s Discovery Stakes (G3) on this course before going on the shelf.

Logically, Performer is a candidate to cycle back into a 129 TimeformUS figure in his second race off the bench. He could put up a fantastic effort and dominate, possibly setting up an ambitious 2021 campaign.

One downside is that Performer draws the rail for the first time in his career. If he fails to break, he could end up taking a significant amount of mud in his face. Another negative is his lack of Grade 1 experience.

Is taking 7-5 on Performer worth it? On the Cigar Mile card, there must be other races to focus on besides spending time on a short favorite who lacks at least one Grade 1 start in tow and still attracts the most money in a Grade 1.

If Performer is the only option, then perhaps this is not the greatest betting race.

For those searching for a long shot, give True Timber a look at 15-1. By no means does he own more ability than King Guillermo or Performer, but he is a possible winner if those two horses do not run their best.

True Timber actually owns successful past experience in this race with a runner-up finish to Patternrecognition in 2018 and a third to Maximum Security in last year’s edition. In both cases, he put up a respectable 121 TimeformUS Speed Figure for his efforts.

Currently, True Timber is in good form with the exception of one race in 2020. In his Vosburgh Stakes (G2) effort back in September at Belmont, True Timber ran along the inside in the pocket and folded on the turn, finishing a flat fourth by 8¾ lengths.

Otherwise, True Timber had a good return race at Keeneland, where he ran third against a sharp C Z Rocket, as well as a third-place finish after contesting a fast pace in the Forego Stakes (G1) and runner-up finish in the Lafayette Stakes on the Day 2 Breeders’ Cup undercard.

Did the inside position hurt True Timber in the Vosburgh? From Post 8 in this race, he can secure a nice position in the clear, whether on the lead or pressing the pace. If King Guillermo and Performer misfire, he could find himself in a great position through a projected moderate pace.

To touch upon Firenze Fire briefly, he is not fast enough on TimeformUS to win against this field. In six starts this year, the only time he hit 120 came in the True North Stakes (G2). Furthermore, this horse is not exactly a slop wizard judging by his last-place finish in the Forego Stakes and distant fourth in the Carter Handicap (G1) back in June.

King Guillermo, Performer and to a lesser extent True Timber are the horses to focus on. Those three runners are the best options for the late Pick 4.

Those wishing to play with a more simple wager might focus on King Guillermo to win at 7-2 or higher. This is a talented horse with unorthodox connections. The standard of needing a prep race off the layoff before a Grade 1 may not apply.