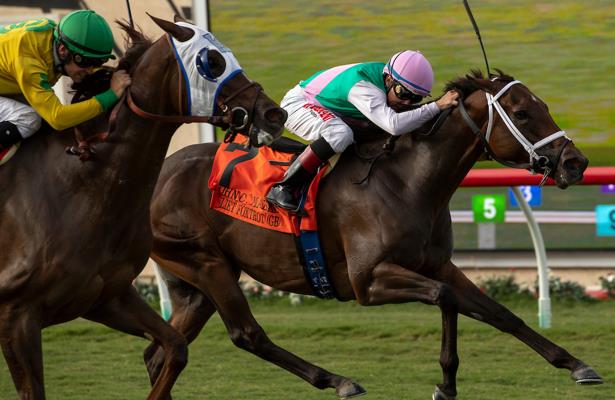 Despite attracting a 14-horse field, Saturday's Grade 3, $100,000 Mint Julep Stakes is a chalky affair at first glance. The two most well-known horses in this Churchill Downs feature, Brad Cox-trained Juliet Foxtrot and Beau Recall, figure to attract the most money based on name recognition. But those two mares also merit the respect based on proven class.

Last summer at Arlington, Juliet Foxtrot built off her two previous allowance wins and took the Modesty Handicap (G3) in wire-to-wire fashion, winning by 1 ¾ lengths. Next, she shipped to Del Mar and almost won the John C. Mabee Stakes (G2), losing by a nose to Vasilika after opening up by two lengths in the stretch.

Juliet Foxtrot then shipped to Keeneland and earned another runner-up finish in the First Lady Stakes (G1), losing by 2 ½ lengths to Uni. Uni later on won the Breeders’ Cup Mile in November and was crowned champion.

While Juliet Foxtrot skipped the Breeders’ Cup, she traveled to Del Mar again for the Matriarch Stakes (G1), finishing third to Got Stormy by 1 ½ lengths.

Other than running a little wide on both turns, there is nothing notable about Juliet Foxtrot’s trip in the Matriarch. Got Stormy outran her.

With that said, Juliet Foxtrot did not give up the lead to any pushover in the Matriarch. She lost to one of the best turf milers at the time.

If Juliet Foxtrot comes close to that effort, she will win. In this spot, there is no filly or mare that matches the late season version of Got Stormy.

From the rail, expect Florent Geroux to utilize Juliet Foxtrot’s speed. In all likelihood, she will either set the pace or sit in the pocket position.

Even at an expectedly low price, Juliet Foxtrot is the top selection.

Cox also trains Beau Recall, giving him a 1-2 punch. He took over the conditioning of this mare last year after she spent 2018 under trainer Simon Callaghan.

According to TimeformUS' Pace Projector, Beau Recall is probable to come from behind, making traffic a concern. She does not own her stablemate’s speed.

But similar to Juliet Foxtrot, this mare is used to facing top horses.

Last May, Beau Recall closed to capture the local Distaff Turf Mile Stakes (G2), defeating the aforementioned Got Stormy and Daddy Is a Legend. One month later, she closed for second in the Just a Game Stakes (G1) at Belmont, losing by 2 ¼ lengths to Rushing Fall, a multiple Grade 1 stakes winner.

After that, Beau Recall traveled to Del Mar for the Yellow Ribbon Stakes (G2), winning by a nose over Vasilika. She also tackled the Rodeo Drive Stakes (G1) in late September at Santa Anita, finishing second by 1 ¼ lengths to a loose Mirth.

With the right pace scenario and trip, Beau Recall is a threat in any turf route. She will not offer generous odds as a multiple graded stakes winner trained by Cox, but she deserves a spot on all tickets regardless.

One filly who may offset the odds of those two mares is Nay Lady Nay, who enters on a two-race win streak for turf guru Chad Brown.

Yet, it is questionable whether Nay Lady Nay defeated any horses of quality in those two races. She also worked hard to win the Mrs. Revere over Dalika, who finished a well-beaten fourth in the Pago Hope Stakes earlier this year at Fair Grounds. If she needed to work to defeat Dalika, how can she beat Juliet Foxtrot or Beau Recall?

In other words, was the Mrs. Revere a Grade 2 of the same quality as Juliet Foxtrot or Beau Recall’s races last year? Even with Brown the trainer, Nay Lady Nay is a toss in this spot who could take some money.

Brown also trains the mare Altea, who only owns one win from 13 starts on this continent. That lone victory came in an allowance race at Aqueduct last November.

Altea does own a runner-up finish in the Endeavour Stakes (G3) this year, crossing the wire ahead of Got Stormy in fourth. But that version of Got Stormy did not resemble the brilliant turf miler last fall. Altea cannot get credit for defeating Got Stormy if she did not run her race.

Altea is usable underneath, but she is a toss from the win spot.

Most of these fillies and mares will never reach the Grade 1 ranks, at least not on a consistent basis. However, Juliet Foxtrot and Beau Recall are proven Grade 1-level runners who fit in races against the best, giving them the class edge over this field.

While the layoffs for both mares pose a mild concern, one of them should get the job done.