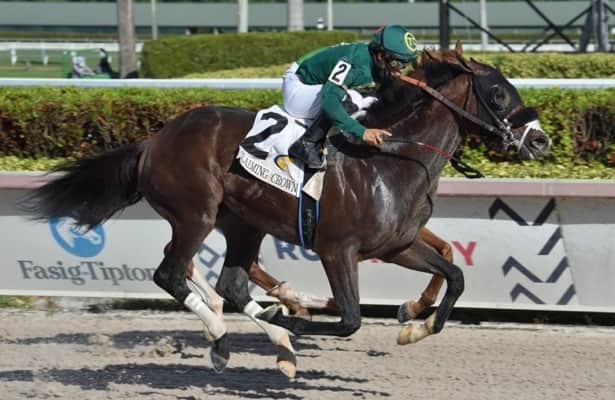 Value players will prefer not to see articles such as this one popping up for the $3 million Pegasus World Cup at Gulfstream on Saturday. Nevertheless, the defections of star players for the race opens the possibility of a long shot stealing the show.

One double-digit odds horse to consider is the closer Jesus’ Team, who makes his first start of the year after a surprisingly successful 2020.

After finishing second to Sole Volante in a local optional claiming race last June, Jesus’ Team kept backing up the effort in stakes race after stakes race. He ran a decent fourth against Authentic in the Haskell Stakes (G1), and then followed it up with a second in the Pegasus Stakes at Monmouth, third in the Jim Dandy Stakes (G2), another third in the Preakness Stakes and another second in the Breeders’ Cup Dirt Mile.

Granted, Jesus’ Team is not exactly a win machine with three wins in 13 starts. But he did pick up a confidence-boosting score last month in the local Claiming Crown Jewel Stakes over the loose Storm Runner at the same nine-furlong distance as the Pegasus, making him a proven winner over this course and race configuration.

Plus, he figures to get a pace setup. According to the list of probables, Knicks Go and Sleepy Eyes Todd are likely to enter the Pegasus World Cup. Knicks Go is a confirmed pacesetter who wins by fracturing the field with his speed. As for Sleepy Eyes Todd, he is a pacesetter in longer routes such as this one and a stalker or closer in sprints.

If the pace is slower than expected, then Jesus’ Team might adapt as well. Notice that he made use of tactical speed to settle closer in the Claiming Crown.

Jesus’ Team worked to fight off Storm Runner and won by only 3/4 of a length. However, the narrow margin is excused given Storm Runner enjoyed an uncontested lead. Earlier in his career, Storm Runner offered a bit of promise too. Remember him on the 2018 Derby trail? Storm Runner was discussed as a legitimate Kentucky Derby prospect.

Given that Jesus’ Team owns the class, successful experience over the course and mild versatility in terms of running style, he is a great choice in the Pegasus this week.

For those who do not care about price, Code of Honor is probably the best closer in the race. He also sports the most impressive credentials in his record.

Look back on the three-race stretch in mid-2019 when Code of Honor took the Dwyer Stakes (G3), Travers Stakes and Jockey Club Gold Cup. He was amazing in that period before a disappointing seventh-place finish in the Breeders’ Cup Classic.

Code of Honor’s 2020 campaign was a disappointment in comparison. Regardless, he did complete the season with two good efforts after a second-place finish in the Kelso Handicap (G2) to the sharp Complexity and another second in the Clark Stakes (G1) to Bodexpress, who was capable at the top level on his best day.

Perhaps Code of Honor bounces back in 2021 and starts picking up wins again at the highest level. Given the defections of Tiz the Law and Charlatan, this is a good spot for him to start the year on the right track.

Given normal growth and maturity as a 4-year-old, Jesus’ Team might even improve upon his 3-year-old races and develop into a top horse. The foundation of running well in graded stakes races is there. He only needs one more step forward to regularly close the deal.

Is it possible that every public handicapper piles on Jesus' Team and destroys the value? In big races such as this one, where public hype picks up steam, that is a possibility.

But if Jesus’ Team starts at 10-1 or higher, those are fair odds on a good closer.