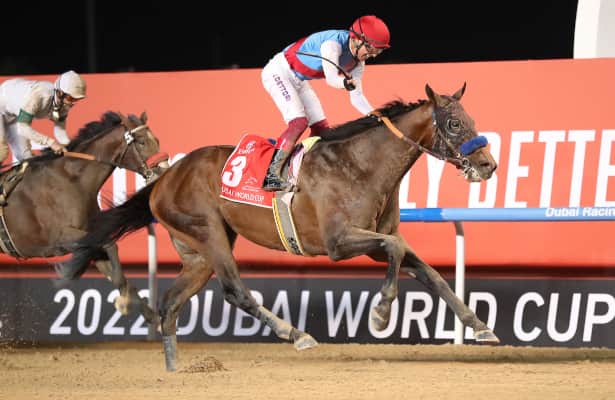 Before unloading on Country Grammer in the Grade 2, $300,000 San Diego Handicap at Del Mar on Saturday, consider whether this son of Tonalist will fire off the bench after competing in both the Saudi Cup and Dubai World Cup.

As stated before, some horses return from the Middle East with no problems and return to form immediately. Other horses need a race or two to shape into form again. A few horses might not recover at all from the desert. No hard rule exists for how to approach the runners returning from the Middle East. Handicappers almost need to guess.

One clue comes from watching morning workouts if the replays are available. In the case of Country Grammer, his recent works in company with stablemate Shaaz either make Country Grammer seem unprepared to win this week or Shaaz ready to fire.

On July 13, Country Grammer and Shaaz worked six furlongs together at Santa Anita. The video is available on YouTube on the XBTV channel.

Watch the stretch run carefully, in particular the arms and hands of both exercise riders. Despite minimal urging, Shaaz maintains his position over Country Grammer. In contrast, the rider on Country Grammer digs into his mount by pumping his arms in a strong manner.

After the finish line, watch how Country Grammer starts to drift to the right around the turn, while Shaaz separates from him for a lone gallop out as the video ends.

When the two work six furlongs again on July 24 at Del Mar, the stretch part of the workout is almost a carbon copy of the July 18 work. The work is not available on the XBTV YouTube page, but handicappers can watch it on the XBTV website with an account.

In the July 24 work, once again the arms and hands on Shaaz’s exercise rider seem relatively quiet throughout the stretch. Meanwhile, Country Grammer’s exercise rider visibly pumps his arms and shakes the reins in an attempt to find more out of his mount. After the finish line, the rider of Country Grammer keeps urging him around the turn to keep up with Shaaz, while Shaaz maintains his advantage comfortably without help.

Trainer Bob Baffert might fire off the bench at a high rate with most of his runners coming off a layoff, but he also trained Arrogate to a lifeless fourth in the 2017 edition of the San Diego at extremely short odds.

Arrogate had come into the San Diego off a layoff following a successful trip to Dubai. After a bad start in the Dubai World Cup (G1), Arrogate somehow won in one of the most memorable runs of the race's history.

Country Grammer exits two grueling races in the Middle East, which is a concern. In the Saudi Cup (G1), Country Grammer finished second to the long-shot closer Emblem Road. One month later, Country Grammer captured the Dubai World Cup (G1) at Meydan by 1 3/4 lengths over the familiar Hot Rod Charlie.

Based on those two workouts and the knowledge that he exits a layoff after trips to Saudi Arabia and Dubai, Country Grammer looks like a questionable bet at low odds this week in the San Diego. Country Grammer’s connections likely will not care if they lose the San Diego Handicap, as it is a stepping stone toward bigger races such as the Pacific Classic (G1) and the Breeders’ Cup Classic.

No matter how Country Grammer fares this week, those are red flags above to consider before playing him at probable low odds. The better strategy is to play against him and see where he stands. If he returns strong, then playing him at low odds is acceptable next time.