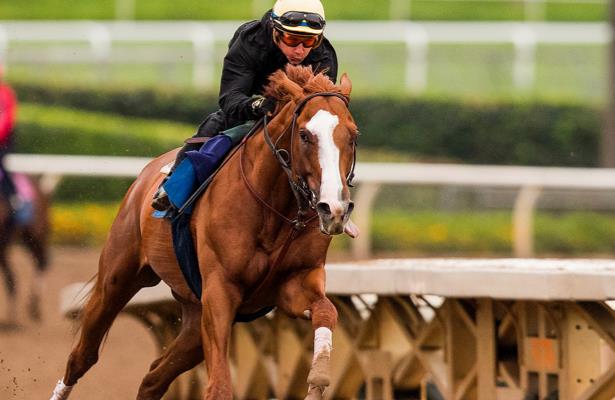 After analyzing the pre-entries, Catalina Cruiser looks like a standout in the $1 million Breeders’ Cup Dirt Mile on Nov. 3 at Churchill Downs. Only four horses are in outside of those cross entered, and six of the 10 cross entries hold first preference in another race, including the talented sprinter Promises Fulfilled.

Catalina Cruiser, the lightly raced but unbeaten 4-year-old, can take them all the way. But does that make him a good bet in the Dirt Mile?

From a pace standpoint, he certainly holds a significant advantage. There are a couple of decent 3-year-old horses lined up, such Firenze Fire, Seven Trumpets and Bravazo, but none of them pose legitimate pace threats. The 4-year-old colt City of Light is capable of brilliant speed, but it also went missing in the Forego Stakes (G1).

Even though the Dirt Mile at Churchill Downs severely favored closers in 2010 and 2011, without the presence of Promises Fulfilled it should favor Catalina Cruiser.

On speed figures, Catalina Cruiser leads the field as well, at least when using TimeformUS.

The son of Union Rags won the San Diego Handicap (G2) by more than six lengths in wire-to-wire fashion with a 130 while defeating Dr. Dorr and Dabster.

In the Pat O’Brien Stakes (G2), he romped by more than seven lengths with another 130 over last year’s Dirt Mile winner Battle of Midway, who returned off a long layoff.

Catalina Cruiser earned Beyer Speed Figures of 107 and 103 in those same races. If translated to the TimeformUS scale, they equal 127 and 123. The Beyers do not make him as invincible as TimeformUS, but a 107 is still high, and supporters will say he earned the 103 without full effort, which is a valid argument. So, his numbers look good.

Given Catalina Cruiser’s pace and speed advantage, as well as his two graded stakes wins in tow, it's feeling like he won't lose in the Dirt Mile.

But, again is Catalina Cruiser a good bet? Should horse players risk money on a contender likely to go off at even money or less even as he appears nearly invincible on paper?

The answer is no.

Stone cold locks do not exist in horse racing, so Catalina Cruiser can still lose for a wide variety of reasons. For example, look at Abel Tasman in the recent Zenyatta Stakes (G1) at Santa Anita. She was perhaps not feeling well and flopped.

Profitable betting is about catching the public off guard, and there is no shortage of hype surrounding this colt heading into the Dirt Mile. Flashy wins catch the public’s attention, even if earned against suspect competition in favorable pace scenarios.

Specifically look at the horses Catalina Cruiser defeated. What has Dr. Dorr done lately? Also, note how Battle of Midway ran in the Kelso Handicap (G2).

The reigning Dirt Mile champion looked like an optional claimer in this race.

Furthermore, even trainer John Sadler is decreasing value by hyping Catalina Cruiser's talent, saying, “We haven’t really seen the best of him yet.” All trainers act as spokesmen for their horses, so you never know whether to buy into it. But Sadler is a veteran, highly regarded trainer.

Also remember one is required to place money on a Breeders’ Cup race to enjoy one of the championship events. Think about all those quality races lined up over two days. Unless playing against Catalina Cruiser, why choose this one?

For those who want to swallow a low price, the only way to play Catalina Cruiser vertically is to throw longshots underneath him in exotics, while using the win bet as a saver if he remains at even money or higher. If he falls lower, forget about it.

Which horses are thrown underneath him? The key is beating Firenze Fire and City of Light in the second slot. Awesome Slew, Seven Trumpets and even an out-of-form Bravazo are candidates for slightly spicing up the board. That's difficult in a short field.

Alternatively, bettors can look for longshots horizontally in a double or Pick 3 while using Catalina Cruiser as a single. The Breeders’ Cup Turf Sprint one race before might offer a nice overlay in World of Trouble, and the Filly & Mare Turf one race later will showcase a few intriguing European invaders taking on Sistercharlie.

Also, those with significant cash may plop down $1,000 or so on a Catalina Cruiser win bet and feel fine with a $2,000 return (assuming even money). For a $20 bettor, though, why risk it? Even the $1,000 bettor is not making a sound wager, but at least he is getting something substantial in return. A $20 bettor is earning only $40.

Consider how forced those suggested wagers are in nature. Good bets come more naturally, without needing super longshots to make the wager worthwhile. Even with higher prices mixed in the tickets, the presence of a super-low price still dilutes the payoff.

Some people may not care about value and want action, and that is fine, too. The feeling of holding a winning ticket is a good one no matter how little the payoff.

But while Catalina Cruiser looks like a certain winner in the Dirt Mile, he also represents one of the worst bets of the day. With his expected odds-on status, betting him is illogical. Unless playing against him, the better option is skipping this race altogether.