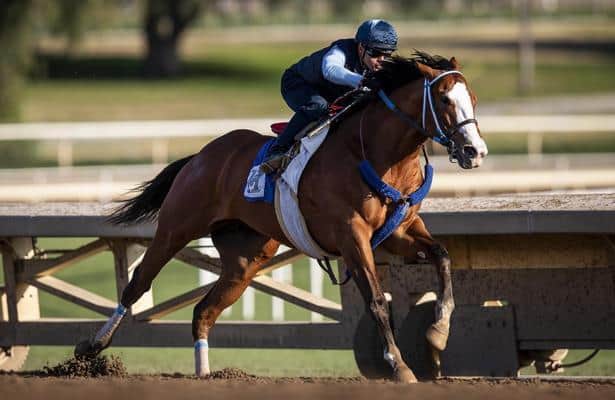 Skipping Kentucky Derby prep races as a bettor is difficult considering everyone wants to become part of the action when these important races run. Even if the card offers other stakes events, you're always waiting for the feature for 3-year-olds.

For instance, in the Grade 3, $300,000 Gotham Stakes at Aqueduct on Saturday, the unseen star Instagrand comes off a seven-month layoff and is generating plenty of discussion for a one-turn mile. He displayed tremendous talent before his shelf time with a 10 ¼-length score in the Best Pal Stakes (G2) and a 10-length maiden win. But the mystery surrounding his form upon return makes the race a difficult one to bet.

Furthermore, the TimeformUS Pace Projector calls for a fast pace, which does not help matters. If Instagrand uses his usual early speed, he could face tons of heat.

Yet, Instagrand may also dazzle everyone, too. He is working quite well.

In this four-furlong spin on Tuesday at Santa Anita, Instagrand initially appeared eager. Once the rider let him roll, he began to move fast and smooth around the far turn. He then switched leads seamlessly in the stretch run and continued on easily to the wire.

Off that work and his previous form last summer, it is tough not to get caught up in the hype. However, it still makes more sense to use some caution before jumping on the bandwagon.

There are a few alternatives to consider. Unfortunately, my next two choices go along with the morning line, which leads back to the question of whether this is a playable race.

The most obvious upset chance comes from Mind Control, who won the Jerome Stakes on New Year’s Day. He also took the Hopeful Stakes (G1) last summer at Saratoga before turning in a disappointing run in the Breeders’ Cup Juvenile when finishing seventh.

Besides his previous stakes wins, Mind Control also gains a plus for not requiring the outright lead. In his maiden win at Monmouth Park last August, he sat off the leader.

The other main alternative is Not That Brady, who finished second by a head to Tax in the nine-furlong Withers Stakes (G3) after setting the pace. With two previous one-turn mile wins in tow and one second-place finish, the cutback to this distance should suit him.

But this gelding has set the pace four times in a row, and it is unclear how that running style will work out in a race that includes Instagrand, Mind Control and Knicks Go.

Not That Brady did earn an impressive 119 TimeformUS Speed Figure for his runner-up in the Withers, the highest speed figure in the field.

Also, note how wide Not That Brady went on the first turn.

The son of the popular Lisa's Booby Trap ran an excellent race.

However, setting the pace uncontested in the Withers is one thing, while going toe to toe with Instagrand in the initial stages is on another level. Can he handle it?

Haikal and Tikhvin Flew look like the only other potential win options.

Both horses come out of the local Jimmy Winkfield Stakes, where Haikal ground out a win by a neck on the inside, while Tikhvin Flew hung late on the outside for third.

Previously, Haikal broke his maiden by a neck, too, and he also finished second by a neck to Family Biz in another local maiden race back in November.

Haikal’s pedigree is questionable. His half-brother, Takaful, could not run a step over seven furlongs. Yet, the same connections threw him onto the trail and he disappointed backers in the Remsen Stakes (G2), Jerome Stakes (G3) and Fountain of Youth (G2).

If there is one difference between the two siblings: Haikal owns a closing running style, while Takaful loved to step on the gas pedal early. It could make a difference here.

Tikhvin Flew made up no ground late in the Jimmy Winkfield, but he broke his maiden locally one month earlier with a 112 TimeformUS Speed Figure. From that race, the second-place Pulsate and third-place Spun to Run returned to win their next starts out.

What happened in the Jimmy Winkfield? It is not clear. Both races came at seven furlongs. Tikhvin Flew regressed from the initial 112 TimeformUS number, earning a 106 in the latter.

For a longshot closer, Family Biz ran fourth in the same race, but three starts ago he ran third to Mind Control in the Jerome and actually gave Haikal his only loss.

Family Biz's recent form gives no indication he can compete for the win spot. If he runs back to his Jerome effort though, he might give the trifecta payoff some spark.

The last two horses to mention Knicks Go and Much Better, two speed types projected to fade given their form and the expected pace scenario in this race.

Knicks Go faded badly in his last two starts, finishing fifth by 13 lengths in the Sam F. Davis Stakes (G3) and 11th by 18 ½ lengths in the Kentucky Jockey Club (G2) last fall. Before those two races, he ran second in the Breeders’ Cup Juvenile to Game Winner. Is it a sign Game Winner defeated weak horses, or is Knicks Go off form?

If Knicks Go ran back to his Breeders’ Cup effort, he could win. Nothing indicates he's ready to do that, though, and the pace scenario completely goes against him this time.

Much Better takes up the last spot in this analysis because he looks like a sprinter on paper. In his three attempts at one mile, two on turf, he faded late. Granted, within those three races he ran third in the Sham Stakes (G3) and second in the Zuma Beach on turf.

On the plus side, sometimes sprinters who run a one-turn mile find it easier than two turns at the same distance. It is plausible this one could hang around for a piece underneath for trainer Bob Baffert.

For horizontal wagering purposes, Instagrand, Mind Control and Not That Brady all work as As, or Instagrand could take up the lone A spot and the other two are Bs. Haikal and Tikhvin Flew are logical choices to place in the C slot, if used at all.

If playing vertically, use longshots underneath to make it worthwhile.

This race is filled with question marks and works better as one to watch for Kentucky Derby handicapping purposes. As a betting race, it is particularly difficult to form a strong opinion.