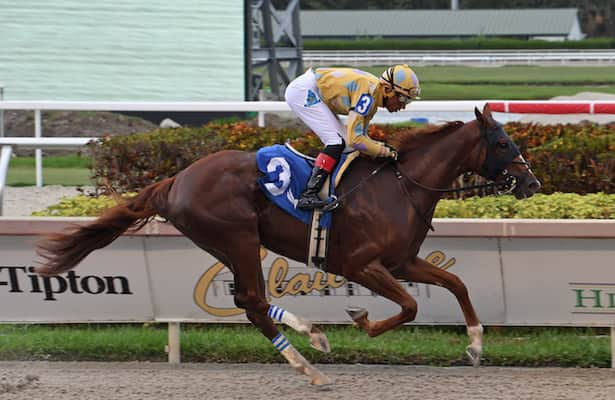 Infinite Diamond starts in a graded-stakes race for the first time in the Grade 1, $500,000 Alcibiades Stakes Friday at Keeneland. The progressing filly deserves a long look based on the improvement shown when switched to a route distance in a maiden race at Gulfstream Park.

When 2-year-olds get past their summer races and attempt to route, some of them change overnight for the better. One of the fillies who possibly made the change is Infinite Diamond, who broke her maiden by 14 1/2 lengths on Sept. 16 at Gulfstream in her one-turn mile debut.

Get Paddock Prince picks for the full Keeneland meet

In the Gulfstream race, Infinite Diamond set a slow pace through fractions of 24.29 and 47.37 seconds while under initial pressure from Honor D Lady and Penumbras Maker in the first quarter. On the turn, she began to draw clear from Honor D Lady.

Under a mild ride at best, Infinite Diamond exploded in the stretch and led by eight lengths at one point before continuing to finish the race strongly and blow the field out at the end.

Honor D Lady finished 14 1/2 lengths behind Infinite Diamond, but she also had nine lengths on the third-place Penumbras Maker, who faded in the stretch after flashing early speed along with Honor D Lady early on.

For the sparkling maiden romp, Infinite Diamond earned a career-high 96 TimeformUS Speed Figure and 73 Beyer Speed Figure. Because of the slower pace, TimeformUS likely adjusted the figure to a 96 from an initial raw final figure of 100.

Two starts ago, Infinite Diamond ran a mild fourth in an Aug. 14 maiden sprint at Del Mar with an 85 on TimeformUS and 67 Beyer Speed Figure. This effort is notable because of the company she competed against.

Because Infinite Diamond turned in a competitive race against And Tell Me Nolies and Ice Dancing at Del Mar, it gives her form at least some unofficial class as she makes her official Grade 1 debut this week.

Plus, Infinite Diamond is listed at 10-1 on the morning line. Considering Infinite Diamond’s 96 on TimeformUS is the co-third highest dirt speed figure in the field and she did not even try her best in that Gulfstream maiden blowout, double-digit odds on this filly makes her a value option.

The only downside is trainer Patrick Biancone. According to TimeformUS, Biancone is 0-for-8 in the last year at Keeneland and 0-for-13 with horses who made their last starts 15-26 days prior. In addition, the team of Biancone and jockey Florent Geroux has gone 0-for-5 in the last year.

As a bettor, those are some lousy statistics to swallow. But a good horse can turn the ship around, and Infinite Diamond gives the impression of a good filly.

Even though the Alcibiades is a Grade 1, it is not a strong race for this level. The 7-2 morning-line favorite Fun and Feisty won the Pocahontas Stakes (G3) at Churchill Downs as the blog choice in her most recent start, but she posted only a 97 on TimeformUS for the win and therefore holds no real advantage from a speed figure perspective.

Infinite Diamond could fall a little bit in odds and still offer value. Because of the trainer statistics, though, do not accept too low of a price.

At 6-1 or higher, Infinite Diamond works as a win or place bet.