Analysis: Improved Under the Stars is a contender in Test 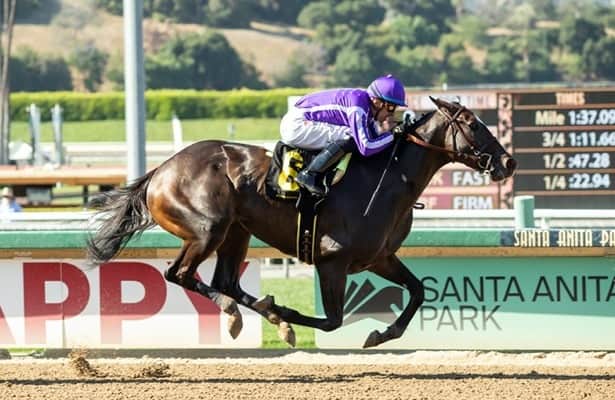 Although California-based 3-year-olds lose more often than not when they ship east this year, perhaps Under the Stars can reverse that trend on the filly side when she starts in the Grade 1, $500,000 Test Stakes at Saratoga on Saturday. She looks ready for this next step.

Under the Stars gives the impression of a realistic challenger to the expected favorite Matareya, who carries a four-race win streak into the race. Since Under the Stars's debut last October, she has stood out from a pedigree standpoint as a 3/4 sibling to 2012 Kentucky Derby runner-up Bodemeister.

Here is a recap of Under the Stars's record.

Despite finishing third in her career debut, trainer Bob Baffert saw enough in Under the Stars to start the well-bred filly in the Desi Arnaz Stakes at Del Mar in mid-November. As a maiden, Under the Stars set the pace and faded slightly to third late in her stakes debut.

About one month later at Los Alamitos, Under the Stars finally broke her maiden by three lengths in a six-furlong sprint with a wide stalking trip.

In January, Under the Stars began the new year by winning the seven-furlong Santa Ynez Stakes (G2) at Santa Anita by 3/4 of a length over Awake at Midnyte, who was a disappointment when she shipped east and finished third in the Rachel Alexandra Stakes (G2), fourth in the Ashland Stakes (G1) and seventh in the Eight Belles Stakes (G2) on the Oaks undercard.

Under the Stars continued on with a California-focused campaign and finished a good second by half a length to the uncontested leader Eda in the two-turn Santa Ysabel Stakes (G3).

But in the Santa Anita Oaks (G2), Under the Stars stumbled leaving the gate and never recovered properly while finishing fourth and 11 1/4 lengths behind the winner Desert Dawn. This ugly running line marked the only real blemish in Under the Stars's record, and she had an excuse.

What gives bettors reason to believe Under the Stars can beat Matareya?

When Under the Stars captured the Santa Ynez in January, she earned a 92 Beyer Speed Figure and 114 TimeformUS Speed Figure. But when Awake at Midnyte struggled east of the Rockies, it felt fair to question whether Under the Stars beat a weak opponent in that stakes race.

Sometimes horses do not transfer their speed figures to higher classes or even different circuits if one area is stronger than another. The California group of 3-year-old males and females were weaker than usual, and the results when they shipped mostly supported the theory.

But Under the Stars came back two months later in June and won the Summertime Oaks (G2) by 1 1/4 lengths in a visually pleasing effort over Lady T. She earned a 112 on TimeformUS, but it looked like a stronger win than the Santa Ynez victory, where she earned a 114.

Under the Stars had 10 1/4 lengths on Desert Dawn, who had previously run third by 2 1/2 lengths in the Kentucky Oaks and won the Santa Anita Oaks after taking advantage of a speed duel.

In fairness to Desert Dawn in the Summertime Oaks, she stumbled at the start, and an early stumble is what knocked Under the Stars out of contention in the Santa Anita Oaks. Desert Dawn recovered faster, though, and moved within range of Under the Stars on the far turn before failing to keep up late.

In Lady T's next start, she finished fourth last month in the San Clemente Stakes (G2) on turf, which makes it less useful for handicapping purposes. Before the runner-up finish to Under the Stars in the Summertime Oaks in June, Lady T broke her maiden on dirt by 14 1/2 lengths in a one-mile Santa Anita maiden special weight.

Under the Stars's 112 in the Summertime Oaks feels like a figure that is backed up with concrete evidence of good fillies behind her. She should either match the TimeformUS figure or improve upon it this week.

What speed figures did Matareya earn in her last three starts? She received a 112 in the Acorn Stakes (G1), 114 in the Eight Belles Stakes (G2) and 116 in the Beaumont Stakes (G3). As stated earlier, she won all three races, and also a Fair Grounds allowance in February for a four-race win streak.

Under the Stars seems within range of Matareya on numbers, although one more step is probably needed if she wants to beat the favorite.

As usual, the right price will make Under the Stars an attractive bet. Earlier in the year, she was not ready to ship east and tackle better fillies. But at this point, Under the Star feels more developed and prepared for the test she faces against Matareya on Saturday.