Analysis: Playing Point of Honor in the Black-Eyed Susan 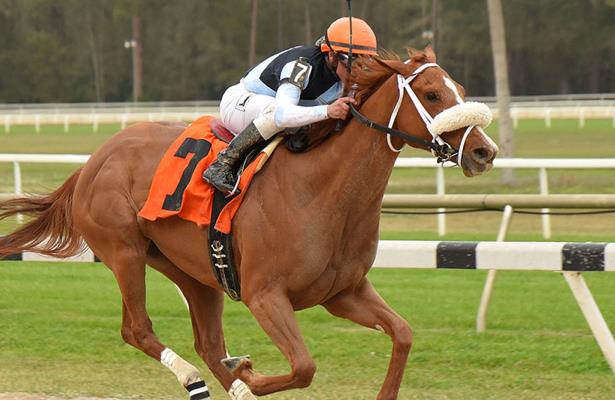 Morning line odds makers aren't always accurate, as they're sometimes directed to list some misleading prices, and other times interject their own handicapping as opposed to reflecting the public’s opinion.

With that in mind, the morning line for Grade 2, $250,000 Black-Eyed Susan Stakes on Friday at Pimlico Racecourse feels off. It lists Point of Honor as the 5-2 favorite, even though she lost her last start in the Gulfstream Park Oaks (G2). In fact, she failed to hit the trifecta and finished two lengths behind.

Because of the Gulfstream loss and the fact that George Weaver trains her, Point of Honor feels more like 4-1. If that is true, then she is a good value because the race sets up for a closer.

As an example of Point of Honor’s strong late punch, this mid-pack runner broke her maiden last December by more than six lengths at Gulfstream, lengthening her advantage from two lengths at the top of the stretch.

Granted, this field was not too strong, but it was a good start to her career.

One race later in February, she took the Suncoast Stakes at Tampa Bay Downs after pulling away by more than two lengths. Sweet Diane finished third.

In both cases, she improved toward the wire en route to victory. It is no wonder TimeformUS gave Point of Honor the best late pace rating at 100.

Why did she finish fourth in the Gulfstream Oaks in March? Using TimeformUS, there is one big clue in the speed bias indicator. It labels the race as dark red, indicating the card favored speed to a severe degree.

Notice how the 1-2-3 horses retained those spots at the end, only switching positions among themselves.

Another clue is in the compressed margins on the backside, as the field ran scrunched together. A closely-knit field usually signals a slow pace.

Point of Honor came with a steady run on the far turn and continued on inside, but the top three horses reserved too much energy. Watch how Point of Honor inches closer anyway as she keeps creeping toward the leaders.

Expecting an honest pace these days feels like a lost cause, but the Black-Eyed Susan is supposed to offer one. Point of Honor's late kick will look sharp after speedier fillies such as Ulele, Cookie Dough and Las Setas fold.

It's also possible one of those speedsters rates. If two of those fillies rate, we could be left with a repeat of what happened in the Kentucky Oaks when Serengeti Empress got away with an unexpectedly easy lead. In any case, Brill may mix it up with this bunch, too.

The Black-Eyed Susan/Preakness double is one option on the wagering menu. Using Point of Honor along with Always Shopping and Brill works for the first leg, while the second leg will need one or two longshots because those three fillies are low-priced.

Alwaysmining, Bourbon War and Laughing Fox work for the second leg. Those three newcomers give the ticket a nice mix of one short price, one middle price and one true longshot. Call it the “new shooter” double.

As a third double structuring option, Point of Honor might work as an “A” with Always Shopping and Brill less emphasized and used as savers.

For example, Point of Honor could be played multiple times with Alwaysmining and Bourbon War, while Always Shopping, Brill and Laughing Fox get used sparingly as B or C options.

Another longshot can replace Laughing Fox. The main point is that it makes no sense to use all favorites in the first leg and the second leg, unless the bet is played for a large amount or multiple times to get a bigger payoff. But in that case, the bettor must be confident in those short prices in both legs.

For a vertical play, Point of Honor is not a terrible win or place bet at 3-1 or higher. If the oddsmaker is correct, though, and she stays at 5-2, then try something else. Betting to show is not recommend in most cases.

Why key Point of Honor in the second slot? Horse racing is not an exact science. Think of how many times bettors go on seconditis streaks.

Of course, the standard pyramid trifecta scheme with Point of Honor, Always Shopping and Brill on top is yet another option, with those same three fillies and some longer prices to help the ticket in the second and third slots.

That is probably the trifecta structure the public uses most often, although it does get expensive.

Going back to the morning line, if Point of Honor dips down below 2-1, betting her in any form is not a good idea. Wait for Preakness day with your bankroll.

But the oddsmaker is probably off here. The one annoyance with making Point of Honor the favorite is that it automatically gives her more attention, bringing her closer to that point than if he made her 4-1 in the first place.

By the time the race starts, though, either Always Shopping or Brill should take up the favoritism role, and Point of Honor will offer some value.