Analysis: High Velocity trending up for the Bob Hope Stakes 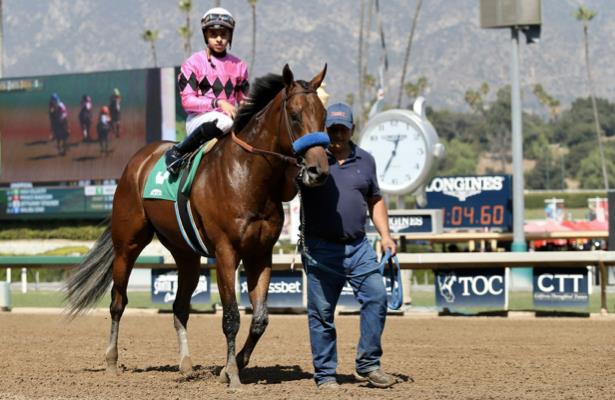 On every brand of past performance, High Velocity is only the second-fastest horse lined up among expected starters in the Grade 3, $100,000 Bob Hope Stakes on Saturday at Del Mar.

But this Bob Baffert-trained 2-year-old colt will garner the top spot in this analysis, mainly due to faith in him being a better horse than he's already showed. A debut victory only got the ball rolling.

Baffert's other entry, Thousand Words, is expected to scratch from this seven-furlong race. And there are a couple of signs that indicate High Velocity is sitting on a better performance than the new favorite by default, Strongconstitution.

Keep in mind most maidens use their career debut as a learning experience. Even some Baffert-trained horses are not ready to deliver a big performance in their first start, with American Pharoah the most prominent example.

In his Oct. 13 maiden win, High Velocity ran a 95 TimeformUS Speed Figure, 87 Brisnet Speed Rating and 81 Beyer Speed Figure. Those are the third-best numbers on each of those scales. But he also chased an arguably slow pace.

Prince Magician ran on a comfortable lead in that race through fractions of 22.27, 45.76 and 58.14 for a 5 ½-furlong event. While TimeformUS does not label those fractions as slow, it is hard to imagine them as anything but that.

When a pace setter is unchallenged on a slow lead, that is a dream scenario. Prince Magician enjoyed a one-length advantage through those splits.

High Velocity chased Prince Magician in second and mowed him down in the stretch anyway with a moderate effort at best. Yes, he got hit with the whip a few times while taking dead aim at the leader. But with the race practically won in mid-stretch, jockey J.C. Diaz Jr opted for a hand ride late.

Noble Order is a son of Union Rags that cost $210,000. With several route influences underneath, he probably lacks the speed for flashy workouts. Nevertheless, it remains a good sign that High Velocity glided by him.

High Velocity also breaks sharp, as seen in both his morning workout and maiden win. In 2-year-old dirt races around one turn, that's a big advantage.

He broke his maiden on turf on Aug. 23, winning by 1 ¼ lengths. Two months later, he gave dirt a chance in the Sunny Slope Stakes at Santa Anita, running a close second to the more experienced Fore Left.

Notice, though, how Mario Gutierrez on Fore Left played games with Strongconstitution rider Martin Garcia on the turn. Gutierrez baited Garcia into staying inside by giving a temporary opening before coming in close again, making it tight for Garcia.

Most young horses are too intimidated by tight quarters on the rail to rally properly. Given the lack of breathing room inside, it is understandable Strongconstitution failed to pass Fore Left late. He might deserve another look from bettors, especially with the jockey switch to Abel Cedillo.

But due to Thousand Words' scratch, it is reasonable to conclude the value on Strongconstitution is gone, too. It all depends on whether bettors flock to the remaining Baffert colt and overbet him, or stick to Strongconstitution.

Rager deserves a mention as well for winning his career debut on turf. He could threaten the top three if he translates his form to the main track. But notice his dam Distorted Champ is a half-sister to the turf router Champ Pegasus.

His sire is Into Mischief, whose progeny obviously run well on dirt. But there are not even any workout replays to hint Rager can handle this surface.

Then again, he might offer the only remaining value if any exists given Thousand Words' scratch.

High Velocity is the tepid choice based on potential. He looks prepared in the mornings from a visual standpoint and can build off his successful debut. But Strongconstitution isn't one dismiss, either.

As with many stakes in California, the small field will make it tough on bettors. Keep your tickets narrow in scope.