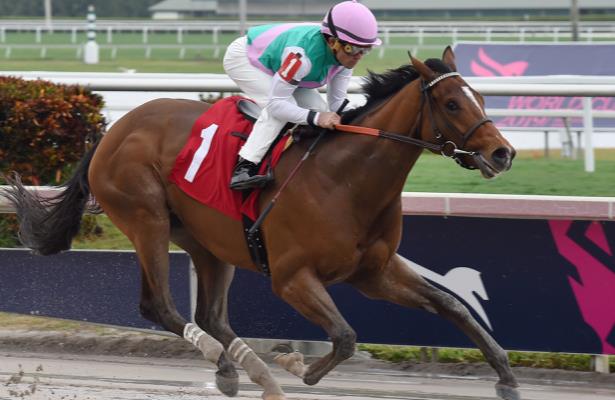 I'm always an advocate of using horses who overcame extreme pace scenarios, but there are some flaws to the system, some of which Hidden Scroll exposed on Saturday with his sixth-place finish in the Florida Derby (G1).

Pace figures do not take into account versatility and jockey/trainer intent.

After the Fountain of Youth Stakes (G2) earlier this month, it was easy to be enamored with Hidden Scroll’s ability to withstand a fast pace and stick around late. The sprinter Gladiator King initially tried to run with him, but he folded badly around the turn, while Hidden Scroll stayed in the picture and managed to hold down fourth.

However, the connections tried to take away Hidden Scroll’s brilliant early speed and rate him in the Florida Derby. The experiment failed miserably.

Without Hidden Scroll present to contest Maximum Security on the lead, the former claimer skipped along crawling fractions and powered home to victory, earning his way into the 2019 Kentucky Derby.

Hidden Scroll saved ground along the rail and appeared in a good position to switch out for run, but he offered nothing when the time came. Bodexpress held second, while Code of Honor and Bourbon War picked up third and fourth. Even the turf horse Current managed to out-kick Hidden Scroll in the lane for fifth.

As strange as this sounds, some speed horses show no punch in the lane no matter whether pace went fast or slow. Their main weapon comes from opening up on the turn.

While it is early in Hidden Scroll’s career, right now he looks like that kind of horse. As for whether Maximum Security can handle fast fractions, he will find out at Churchill Downs.

A few commentators on my previous articles deserve credit too for pointing out that Meydan’s previous golden rail no longer exists, as the track played fair on Dubai World Cup night

Meydan did not favor speed like in years past, although a good speed horse still held a slight advantage, as he or she would in any dirt course in North America.

Last year, the rail bias was monstrous and carried a horse such as Mendelssohn to an 18-length victory in the UAE Derby (G2). This year, Plus Que Parfait and Gray Magician battled in the stretch. Plus Que Parfait ended up prevailing narrowly.

While Plus Que Parfait did well to win, his effort in the Risen Star Stakes (G2) was atrocious, and he did not run well in the Lecomte Stakes (G3) either. Furthermore, Gray Magician is considered only a second-tier 3-year-old in the California circuit.

Consider any win bet placed on Plus Que Parfait in the Kentucky Derby as dead money that will help the value on the rest of the field.

No UAE Derby winner has gone on to hit the board in the Kentucky Derby, The streak is not going to change in about a month.

As another example of how speed is an asset in dirt racing, Gronkowski showed improved positioning compared to his past races and almost won the Dubai World Cup.

Note the beautiful job by Oisin Murphy to put Gronkowski in the clear on the first turn and let him engage smoothly with North America and Thunder Snow early on.

In contrast, my top choice Capezzano fought his rider Mickael Barzalona on the first turn and did not show anything when the time came. North America, the other popular local choice, failed to put up a fight in the stretch run either after a comfortable lead.

If Gronkowski came back to the States and used tactical speed more often, I believe he could win Grade 1 races and even contend in the Breeders’ Cup Classic.

As for the American also-rans Gunnevera, Pavel, Audible, Yoshida and Seeking the Soul, most of those horses deserve another chance once they return home. While Meydan did not explicitly favor speed, the flow of the race advantaged the front pack.

Axelrod has run poorly in his two Dubai tries. It is unclear if there is anything wrong. Perhaps if he returns here and cuts back to elongated sprints, it will help.

Getting to the points

Will Bourbon War make the Kentucky Derby? After his pace-compromised fourth in the Florida Derby, he is 15th with 31 points.

While he might get passed by some horses in the following weeks, not all of those will go on to the Derby. Some connections will realize their horse is not a good fit for the difficult race, while others will get hampered by setbacks and defect.

If nothing else, there is an also-eligible list. Remember the controversy over Tale of Verve in 2015, when Dallas Stewart considered entering him off a maiden win?

Speaking of Derby points, the maiden Bodexpress holds 40 points because given his runner-up finish in the Florida Derby. Even though he lacks a win, this horse deserves a shot, as his speed figures line up with the rest of the main contenders.