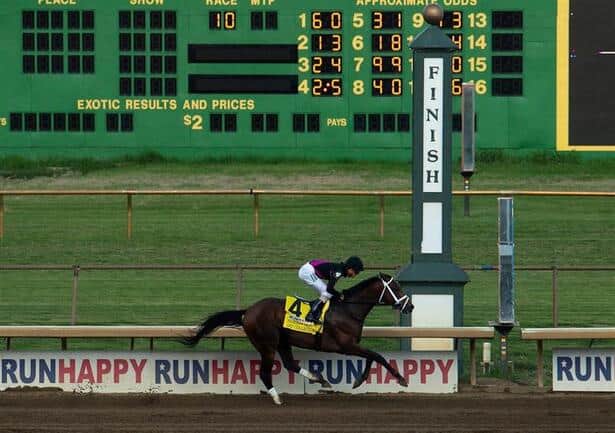 Even though the $120,000 Alydar Stakes at Saratoga is ungraded, the group of eight older horses lined up on Friday resembles a Grade 3-quality field. This edition of the race is also attractive from a betting standpoint, as it offers many questions and multiple directions for handicappers to go in.

The race features a beatable favorite in Night Ops, who carries a five-race losing streak and seems content to complete the exacta or trifecta. Also, former Derby trail runner Art Collector makes his second start off the bench after a disappointing sixth-place finish in the Kelly’s Landing Stakes at Churchill Downs.

At first glance, Art Collector is trending downhill in form. Besides the off-the-board effort in the Kelly’s Landing in June, he ran a disappointing eighth in the Breeders’ Cup Dirt Mile at 9/2 odds and fourth in the Preakness at 2-1.

Before the Preakness, Art Collector had turned in some excellent performances under trainer Tom Drury Jr.

In June 2020, he finished first by 6 ½ lengths in a Churchill Downs optional claiming race containing familiar names behind him in Shared Sense, Finnick the Fierce and Necker Island. He continued the streak by winning the Blue Grass Stakes (G2) by 3 ½ lengths over Swiss Skydiver and the Ellis Park Derby by 3 ¼ lengths. In those two races, he earned a 123 and 124 on TimeformUS, respectively, which were strong numbers in the crop.

Art Collector’s flat fourth in the Preakness is forgivable because he had a physical problem that took him out of the Kentucky Derby a month earlier. Perhaps Art Collector was rushed into the Preakness and did not perform.

As for the fading eighth in the Breeders’ Cup Dirt Mile, facing older horses for the first time is a difficult task, even for a talented 3-year-old.

Also, Art Collector returned off a 230-day layoff in the Kelly’s Landing. In most cases, horses are not prepared to fire their top race off the layoff.

To add to the layoff excuse, Art Collector veered out at the start.

From there, he returned to the field and came up empty in the lane.

Now there are some changes in Art Collector heading into the Alydar. Despite the past success under Drury Jr., Art Collector was sent to the Bill Mott barn. He also switches from Brian Hernandez Jr. to Luis Saez, who is known as an aggressive jockey.

According to TimeformUS, Art Collector is supposed to lead the field uncontested through a slow pace. The closest speed horse to him on the graphic is Jesus’ Team, who is not really a speed horse at all.

Art Collector is the top selection, and 3-1 is fair. If he misses the board again though, then it will be fair to question if his loss of form is permanent.

For a second option with longer odds, Prioritize is one to consider.

Last summer, Prioritize won a nine-furlong optional claiming race on this course and ran a great closing third in the Woodward Stakes (G1), only losing by three lengths to Global Campaign. To end his campaign, Prioritize ran a flat fourth by 8 ¼ lengths in the Jockey Club Gold Cup (G1).

This year, Prioritize began his campaign with a fifth-place finish in the Pimlico Special (G3) on the Black-Eyed Susan Stakes undercard. In fairness, the winner Last Judgment led the field uncontested on a track labeled as favoring speed by TimeformUS. Note how fellow closer Max Player ran a non-threatening sixth. In Max Player’s next start, he went on to upset the Suburban Stakes (G2).

Oddly, Prioritize finished sixth and last in the Suburban by 10 ¾ lengths. Maybe Prioritize deserves a pass for the clunker, especially with the sloppy track.

Prioritize might need the pace to heat up though, or to sit closer than usual. Otherwise, he looks like a player on a track he enjoys.

Jesus’ Team has a reasonable chance as well, even after his poor return off a 106-day layoff at Gulfstream last month. He was an even fifth in a handicap race while carrying 127 pounds. As stated above though, a poor effort in the first start off a break is usually forgivable.

Earlier in the year, Jesus’ Team was second in the Pegasus World Cup, only 2 ¾ lengths behind Knicks Go. The connections then gave the Dubai World Cup a shot, but Jesus’ Team could only finish an even sixth by 8 ¼ lengths.

To touch upon Night Ops, he looks like a horse who does not want to win. As stated above, Night Ops carries a five-race losing streak into the race as the 9/5 favorite. In terms of the win spot, why take 9/5 on a constant loser? He is probably also underlaid in the bottom slots.

In terms of an exacta, it might cost too much money to box them, especially when there is not a double-digit horse within those names.

Since Art Collector has the best chance to win, he is keyable on top of an exacta wheel over Prioritize and Jesus’ Team. The value in the exacta second slot is in beating Night Ops, as it will not pay a whole lot if he is runner-up. To back up the wager, a win bet on Art Collector will help.

Watch the tote board. If the public goes too crazy over Art Collector and makes him even money, then only use the race for multi-race wagers.