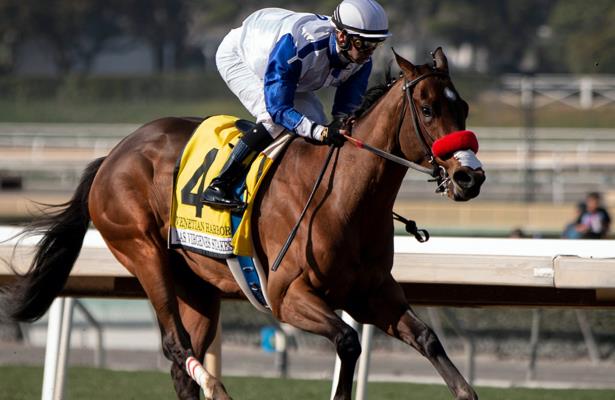 As productive as finding value is, sometimes bettors need to concede the race to low-priced horses or not play the race at all. In the Grade 1, $300,000 Test Stakes at Saratoga on Saturday, the latter option is difficult because of its spot in the second leg of the late pick 4. Most bettors want to get involved with the Travers pick 4 sequence.

The two fillies to use are Gamine and Venetian Harbor.

Gamine romped in the June 20 Acorn Stakes (G1) at Belmont by 18 ¾ lengths after setting a comfortable pace.

She destroyed the field in an unbelievable performance.

Prior to the Acorn, Gamine also crossed the wire first in a May 2 allowance optional claimer at Oaklawn. But weeks later, a positive test and confirmation disqualified her from the top position. In March, she also broke her maiden at Santa Anita by 6 ¼ lengths over a short field.

Gamine earned a field-high 125 TimeformUS Speed Figure for the Acorn romp, adjusted down from a 129 on their scale because of the slow pace (the first two fractions in the running line are labeled in blue).

On paper, Gamine is a superstar in the making. The confirmed positive test is a concern, as it voids the Oaklawn win and even brings questions about the stunning Acorn romp. Is it possible that Gamine ran that well without help? On TimeformUS, her speed figure is higher than Tiz the Law's Belmont Stakes victory later in the card.

Perhaps bettors do not care as long as Gamine gets the job done. Indeed, if Gamine only repeats the Acorn effort, she wins this race.

Just in case Gamine fails to fire, include Venetian Harbor as well.

Venetian Harbor disappointed in her most recent start with a second-place finish in the Ashland Stakes (G1) at Keeneland. She also finished second to a top 3-year-old filly in Swiss Skydiver in the Fantasy Stakes (G3) at Oaklawn. Cross both of those two-turn route races out.

Both from a pedigree and running style standpoint, Venetian Harbor always felt suspect in terms of distance.

This filly’s damline traces back to Safely Kept, the 1990 Breeders’ Cup Sprint winner over males. For the most part, the line has produced mostly sprinters. Munnings as the sire does not help the stamina either.

Venetian Harbor won the one-mile Las Virgenes Stakes (G2) around two turns at Santa Anita, but watch the replay and see how she runs off.

She opens up by six lengths through the opening quarter.

In the Fantasy, Venetian Harbor makes the same mistake of overeagerness and uses up energy trying to open up early.

This time Venetian Harbor had better company behind her. Swiss Skydiver tracks in second and successfully attacks on the far turn.

Perhaps weakened by opening up too soon, Venetian Harbor tries to fight Swiss Skydiver in midstretch and gives way towards the wire.

Speed horses who expend excess energy early in routes such as Venetian Harbor usually want to sprint. They open up quickly because the normal pace of a route is too slow for their natural instinct. Finally, Venetian Harbor gets to cut back to a distance suited to her pedigree and style.

As for Venetian Harbor’s sprinting experience, she finished a good third in a five-furlong maiden turf sprint and broke her maiden by 10 ¾ lengths at six furlongs.

Venetian Harbor is a worthy second option to include in tickets.

For bettors who insist on playing exotics, Mrs. Danvers is usable underneath.

Mrs. Danvers owns two seconds in two starts this year. Both of those finishes came in allowance races at Belmont, and she started last each time and rallied to the runner-up position. She did take a lot of money, losing at 2-1 and 2/5 in the latter race.

In the June 20 effort, Mrs. Danvers lost to a good filly in Indian Pride, who went on to narrowly win the Shine Again Stakes at Saratoga.

Mrs. Danvers figures to offer double-digit odds this time, especially with both Perfect Alibi and Wicked Whisper candidates for the public third and fourth choices. If the pace heats up, she figures to factor in late.

If either Gamine or Venetian Harbor do not fire, Mrs. Danvers is a candidate for second. She is developing and could become a top filly.

July 31 - Analysis: Echo Town can challenge No Parole in Jerkens

- Result: Thousand Words upset the four-horse race.  Note, this was written before Uncle Chuck and Anneau d'Or both scratched.

July 27 - Analysis: Collusion Illusion has most upside in Bing Crosby

- Result: Collusion Illusion ended up winning and paid $_5.80__ as the favorite