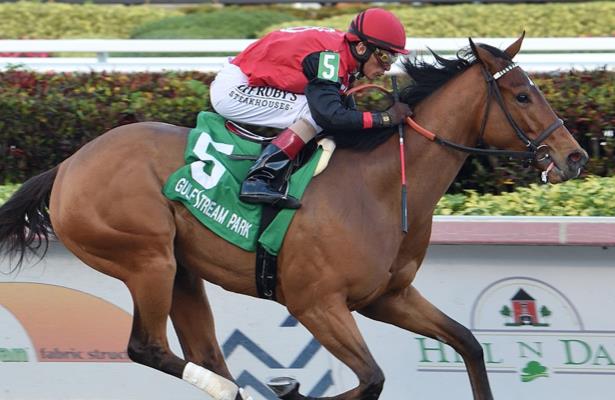 Frank's Rockette enters the $100,000 Purple Martin Stakes at Oaklawn Park as the deserving favorite off her seven-length victory in the Any Limit Stakes at Gulfstream. She is listed at 5/2, and could fall even lower.

But one factor to note before trusting her is the pace scenario, which looks fast from reading TimeformUS Pace Projector and scanning through the running lines. The race features two other frontrunners in Edgeway and Bootytama, and other possible speed-types such as Ring Leader, Flat Out Speed and Wasabi Girl, making Frank's Rockette vulnerable on the front end.

First, here is a quick recap of Frank's Rockette's career.

Frank's Rockette started off quickly last June when she broke her maiden by 8 3/4-lengths at Churchill Downs. But then she ran a troubled second in the Adirondack Stakes (G2) at Saratoga, followed by runner-up finishes in the Spinaway Stakes (G1) and the Frizette Stakes (G1).

In the latter two races, she had no excuse.

But to put a negative spin on the winning effort, TimeformUS marked all three fractions in blue, indicating a slow pace at all stages of the race. Frank's Rockette only took nominal early pressure from the longshot Still Alive. By the time Sound Machine ranged up on the turn with a mild move, Frank's Rockette had reserved too much energy after the slow fractions.

In Frank's Rockette's previous races, she was not a pacesetter. However, she never settled too far off the leader, always sitting one or two lengths behind. According to Pace Projector, she is supposed to chase the leader in third this time, with Edgeway leading.

When betting, it makes sense to play against a favorite with speed coming off a soft pace scenario into one that is potentially fast. Even though Frank's Rockette is not a true pacesetter, there is enough speed surrounding the favorite to make it possible she weakens slightly. She could also endure the pace and win, but she is not dominant enough on figures to assume that.

With Bill Mott training, bettors are even less likely to lay off her.

As for who could take advantage, the talented Kimari makes her season debut after a 155-day layoff and projects to sit near the back.

Kimari competed as a pacesetter in her first three starts, which included a 15-length maiden win and a four-length win in the Bolton Landing Stakes at Saratoga. But she converted into a late closer in the Indian Summer Stakes at Keeneland and Breeders' Cup Juvenile Turf Sprint (G2) at Santa Anita, winning the former and finishing fourth by 2 1/4 lengths in the latter race.

Trainer Wesley Ward has always been high on Kimari, and Mike Smith hops on board. She may start off her 2020 campaign with a bang.

Another closer to consider is Lady Glamour, especially at 15-1.

Forget about Lady Glamour's fades in the Golden Rod Stakes (G2) and Rags to Riches Stakes at Churchill Downs. She did finish third and second in those two races, but she lost significant ground in the stretch each time.

Lady Glamour can get it done, or at least hit the superfecta to spice up the payoffs.

Frank's Rockette remains the horse to beat, but given the low value and fast pace scenario, there is room to include other fillies alongside Frank's Rockette or against the favorite. Kimari looks like the prime threat to mow down Frank's Rockette from behind, while Lady Glamour could get into the mix as well at a price if the pace unfolds right. Those are the three fillies to consider.