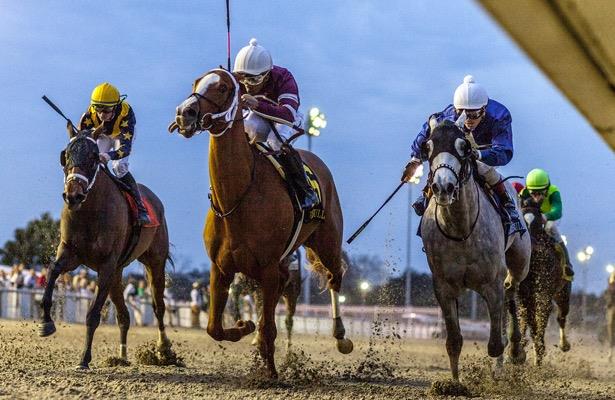 Not often does the public forget about a top filly after one poor effort, but coming off a layoff, Finite had little action on her at Kentucky Downs and Keeneland. In the Grade 3, $100,000 Chilukki Stakes at Churchill Downs on Saturday, though, her odds figure to fall again for good reasons, as she stands out among a field of nine entries.

Finite fits as the top choice, mainly because of class.

This filly became a hot runner as a 2-year-old with wins in the local Rags to Riches Stakes and Golden Rod Stakes (G2). She took the momentum into the following spring and won the Silverbulletday Stakes and Rachel Alexandra Stakes (G2) by 4 3/4 lengths with a career-high 108 TimeformUS Speed Figure.

All that momentum came to a halt when Finite ran a flat fourth in the Fair Grounds Oaks (G2) after a wide trip, losing by 4 1/2 lengths to Bonny South.

Trainer Steve Asmussen and Winchell Thoroughbreds chose to give this filly a break rather than burn her out on the extended Oaks trail.

When Finite came back, she ran a dismal 11th in the Music City Stakes at Kentucky Downs, losing by 14 lengths. Perhaps the connections knew she was not ready and intended the return on grass as a warm-up.

As a result of that effort, Finite started in the Raven Run Stakes (G2) at Keeneland at 9-1 again. But this time, she moved forward with a strong finish down the stretch for second, losing by a neck to Venetian Harbor and posting a 112 on TimeformUS.

Watch Finite attempt to move through the inside.

Finite almost pulls off the mild upset, but Venetian Harbor had an easy trip.

Venetian Harbor did not run well in her next start, finishing eighth in the Breeders’ Cup Filly & Mare Sprint. But that is acceptable, considering she ran against the best female sprinters — and Gamine turned in another unbelievable performance to crush them anyway. Luckily, Finite is moving up the ranks slowly before facing Grade 1 competition.

Consider whether Venetian Harbor would handle this relatively weak Grade 3 field. If the answer is yes, then Finite is logical because she figures to improve and run better than Venetian Harbor did in the Raven Run.

Finite is the choice, even if she starts as the favorite.

Exiting the same Raven Run, Grand Cru Classe is an interesting and expensive filly who was third in that race, only 3/4 of a length behind Venetian Harbor. Prior to that race, Grand Cru Classe began her career with three wins in three starts, including an allowance at Belmont by four lengths and Weber City Miss Stakes at Laurel.

The negative part about the Raven Run effort is that Martin Garcia used his crop on Grand Cru Classe multiple times with only a mild response in the stretch. But she did run wide on the turn, possibly affecting the kick.

Grand Cru Classe also shows the same 112 TimeformUS Speed Figure as Finite. Although she is not making her third start off the layoff as Finite is, Grand Cru Classe is capable of moving forward figure-wise too as an improving filly with only four starts under her belt.

Besides the Raven Run fillies, Sanenus also deserves a look for running near a fast pace and finishing third in a local one-mile optional claimer on Sept. 26. Notice that TimeformUS marks all fractions before the final time in red, and Sanenus was never less than 1 1/2 lengths back before making a brief thrust to the front in the stretch and fading slightly late.

Sanenus also makes her third start off the bench after transferring to the Michael McCarthy barn in the United States from her original home in Chile. Sometimes South American horses wake up over time here.

What about Whoa Nellie? Based on form and figures, Whoa Nellie would normally fit as a top 3 choice. She shows an admirable record at 10: 5-2-2 and speed figures faster than Finite. However, the 278-day layoff is worrisome as the only time she missed the board came off a break.

Also, trainer Larry Jones gets only a 43 rating on TimeformUS with horses starting off 208-348 day layoffs. The connections will not lose sleep if she loses this race.

Finite is the right horse, given her form cycle and proven class. She works as a single for those wanting to spread in other races, but those with money for larger multi-race wager tickets might toss in Grand Cru Classe and Sanenus too.

Depending on the expected payoffs, Finite over Grand Cru Classe and/or Sanenus in an exacta or trifecta (with a deeper spread in the third slot) works as well.