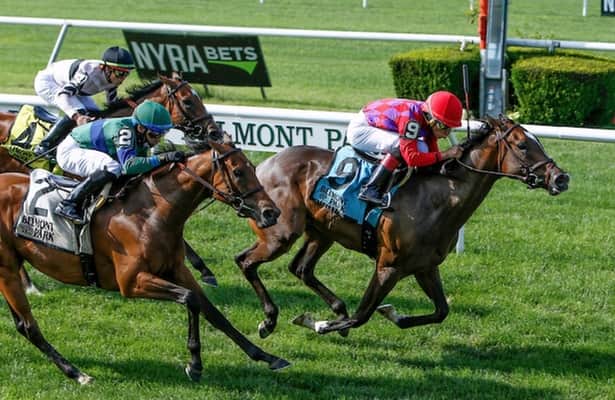 At first glance, the Grade 3, $150,000 Lake George Stakes at Saratoga on Friday is filled with a sea of Chad Brown entries. Noticing four Brown entries off the bat might discourage bettors looking to beat Brown, but there are other viable options to think about playing.

There is at least one non-Brown filly in this race with a legitimate chance of winning, and she is likely to retain her 6-1 morning-line odds. The entrant’s name is Runaway Rumour, and she is trained by Jorge Abreu.

Runaway Rumour gets the nod because of the competition she beat in the Wild Applause Stakes at Belmont last month. In that race, she took the wide path on the far turn and made a nice rally to reach the front under mostly a hand ride from jockey Luis Cardenas.

Even though Runaway Rumour won by only half a length, she beat the Brown-trained Minaun, who had broken her maiden by three lengths in a Belmont turf sprint in April. Minaun also is entered in the Lake George with 6-1 odds.

Back in third was another Brown-trained filly named Nevisian Sunrise.

Browsing down the Wild Applause results chart, the fifth-place Alda had previously won the Hilltop Stakes at Pimlico on the Black-Eyed Susan Stakes undercard.

The seventh-place Bye Bye won the Soaring Softly Stakes (G3) in her most recent race before the Wild Applause.

As for Lovestruck in last, she took the Tepin Stakes at Aqueduct last November before going on the shelf. While she needed the return effort to get back into the flow, it only proves the quality of the Wild Applause to see three previous stakes winners lose to Runaway Rumour, and none of them could even hit the top three in that race.

Also notable is Runaway Rumour’s 3-for-3 record and that the public generally does not bet Abreu entrants eagerly, especially with multiple runners by Chad Brown present. In addition, there is one starter each from Todd Pletcher and Graham Motion. Why would they bet Abreu?

If Runaway Rumour is the top selection, then Minaun is the second choice for losing by only a short margin to Runaway Rumour. Watching the Wild Applause replay, at the top of the stretch Runaway Rumour blocked Minaun’s path to tip outside.

Minaun needed to wait behind Nevisian Sunrise and Runaway Rumour.

When Minaun got clearance, she started rolling after Runaway Rumour.

One concern is that Minaun might need to overcome a wide first turn while starting from Post 10. Jockey Manny Franco needs to find a way to not lose ground.

If Minaun can work out a suitable trip, she can win.

For a more obvious selection, also consider the speedy Jouster.

In Jouster’s most recent start, she faded to fourth after setting the pace uncontested in the Wonder Again Stakes (G3) at Belmont. While it looks disappointing for any horse to give up an uncontested lead, quality fillies were ahead of her at the finish. The winner Con Lima went on to run a close second to Santa Barbara in the Belmont Oaks Invitational (G1) in her next start, with Plum Ali fifth by 2 1/2 lengths in the same next-out race.

Two starts ago, Jouster won the one-mile Appalachian Stakes (G2) at Keeneland in pacesetting fashion. The Appalachian was Jouster's only attempt at a one-mile turf race.

But Jouster faces other speed in the Lake George. According to TimeformUS Pace Projector, Navratilova and Demodog will keep Jouster company. Those two fillies might soften up Jouster.

Runaway Rumour is the choice based on overall ability and value. If this filly does not fall below 9-2 in live betting, those odds are fair enough to attempt a win/place bet. In multi-race wagers include Minaun and Jouster as well. If the other speed fillies scratch and Jouster can secure an uncontested lead, then upgrade Jouster's chances.