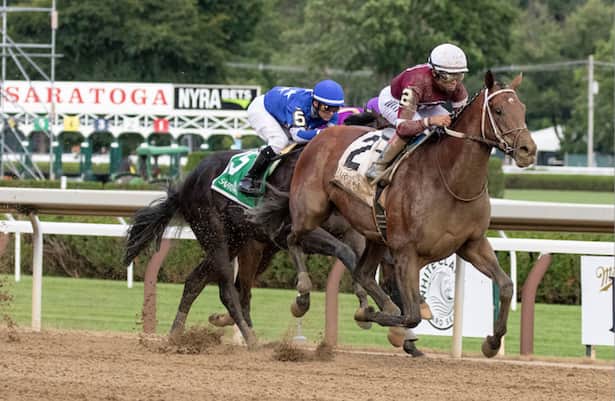 Because the favorite Epicenter has been unpredictable in his style, figuring out the pace scenario in the Grade 1, $1.25 million Travers Stakes has been difficult. On paper, Epicenter looks like the only runner who could make Early Voting sweat. But the question is whether Epicenter will use his speed and make that kind of heated scenario happen.

In Epicenter’s first five starts, the son of Not This Time either set the pace or pressed the leader. Those aggressive tactics led to wins on the Derby trail in the Gun Runner Stakes and Risen Star Stakes (G2), as well as a runner-up finish in the Lecomte Stakes (G3), after receiving pressure in the opening quarter.

Then in the Louisiana Derby (G1) in late March, Epicenter found a new dimension when he waited patiently in the pocket in third before striking on the far turn.

The close-range stalking tactics shown in the Louisiana Derby seemed like the best way for Epicenter to use his speed while showing more patience in his running style, especially heading into the Kentucky Derby and beyond.

Thanks to his rider Joel Rosario, Epicenter took the newfound style one step further in the Kentucky Derby. When it became apparent that the pace scenario was going to run at a suicidal pace, Rosario took Epicenter back and settled in eighth early before moving into the teeth of the storm and taking the lead on the far turn.

Epicenter still lost to Rich Strike in the end, but now Epicenter could use those new closing tactics in the future if the situation called for it.

In the Preakness Stakes, because of a mediocre break and getting caught in traffic before the first turn, Epicenter needed to use those new closing tactics earlier than anticipated. Rosario guided Epicenter to the rail and near the back for the early part of the race, until Epicenter closed for second as Early Voting locked up the race.

Trainer Steven Asmussen reportedly was unhappy with Rosario’s ride on Epicenter in the Preakness, as were countless bettors who expected a more upfront position. The majority of handicappers thought Rosario would attempt to reverse course in the Jim Dandy Stakes (G3) and send him early.

Instead, Epicenter made use of closing tactics once more in the Jim Dandy by settling in fourth and last. At first, choosing to lag at the back made Early Voting look like a certain winner because Early Voting had no pressure once again. Most good speed horses who lead uncontested do not give up the lead.

This situation proved slightly different in the Jim Dandy. The four-horse field and moderate fractions allowed Epicenter to settle closer than he did in the Preakness. With plenty of confidence, Rosario took a loaded Epicenter wide on the far turn and gave a hand ride late to win.

Over time, Epicenter has morphed into a closer. But with Early Voting set to lead the field uncontested again in the Travers, Epicenter could find the old version of himself more useful, even if the fractions turn up a bit hot. Most horses do not lose the ability to show early speed.

Even though Epicenter got away with not using his speed in the Jim Dandy Stakes (G2), the Travers might prove a tougher spot to close from behind because there are eight horses now, as opposed to four in the Jim Dandy.

Then again, Early Voting gave up the lead in the Jim Dandy despite leading the field uncontested through moderate fractions, at best, in the early stages. He could not even hold second or third, as both Zandon and Tawny Port passed him. Maybe Epicenter’s connections feel their horse can beat Early Voting again even if they concede the early lead.

If Epicenter does use his speed, he can survive a hot pace. In the Lecomte, Epicenter set a fast pace relative to the slow Fair Grounds surface and almost pulled off the win before Call Me Midnight took advantage late and mowed him down.

Early Voting might set the pace uncontested, or he might receive pressure from Epicenter if Rosario asks his mount for his old speed. Given Epicenter’s unpredictability, deciding on one of those two scenarios is too difficult. In this situation, it is probably best to just pick the best horse.