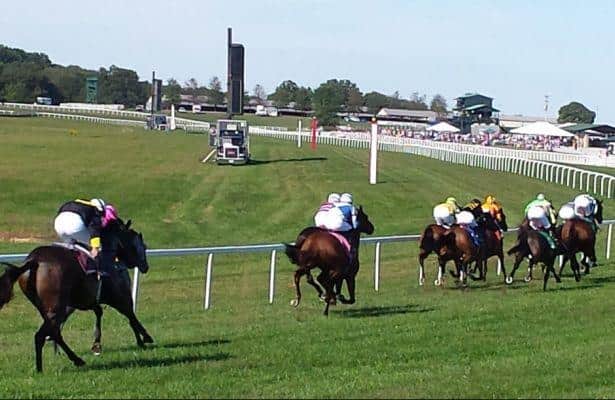 Kentucky Downs closes its 2020 meet Wednesday with 10 more races before the track takes a break until next September. One of the last races is the Franklin-Simpson Stakes (G3), a 6 1/2-furlong turf sprint for 3-year-olds.

The Franklin-Simpson is carded as Race 9 with a post time of 5:32 ET.

Kimari is a likely scratch, given that she ran third to Lighthouse in the Music City Stakes, the female equivalent of the Franklin-Simpson Stakes, only one day earlier.

On that note, one fact about Lighthouse's win Tuesday is that she made her third start off the bench following progressively improving races. Because this is a demanding, European-style course with elevation changes, it makes sense to choose horses hitting their peak form.

Like Lighthouse, Embolden makes his third start off the bench in the Franklin-Simpson.

Upon return, Embolden ran a stalking second in the one-mile Edward P. Evans Stakes at Colonial Downs against older horses, losing to Largent by one length while earning a 103 speed figure on TimeformUS. Largent went on to run a credible second in the Lure Stakes at Saratoga.

Embolden then chased Don Juan Kitten in the one-mile Saranac Stakes (G3) at Saratoga before fading in the stretch run to a decent fourth.

In this spot, Embolden cuts back to 6 1/2 furlongs, although it might feel longer because of the quirky Kentucky Downs configuration. The shorter distance suits him, as Embolden broke his maiden by 10 lengths in a 5-furlong turf race and also won the 5 1/2-furlong Jamestown Stakes a month later at Colonial Downs.

Embolden did not attempt the Breeders’ Cup. Instead, he ran second in the 6-furlong Atlantic Beach Stakes to the speedy Jack and Noah before a game third in the one-mile Remington Springboard Mile on dirt to close out his campaign.

The only question is whether Embolden handles the unique Kentucky Downs course, but that is a question for a number of these entries.

Embolden is the main choice.

If Competitive Saint draws in (and that seems probable, given Kimari’s pending scratch), then consider him too. Unlike Embolden, he owns only three starts. But he made his presence felt in each of them, with two wins and one second.

Competitive Saint made his turf debut in his second start, winning a 5 1/2-furlong allowance race at Saratoga by a nose. He shows a 100 speed figure on TimeformUS for the narrow win.

Perhaps Competitive Saint peaks in his third turf start. Assuming he draws in off the also-eligible list, he figures to get a nice trip stalking the leaders.

As for a long shot underneath, how about Another Miracle? Off a 113-day layoff, this closer won the My Frenchman Stakes at Monmouth Park by half a length. He shows backclass too as the third-place finisher in the Breeders’ Cup Juvenile Turf Sprint.

It is not clear whether Another Miracle is as fast as Embolden or Competitive Saint. Notice he ran only fifth in the Futurity, the same race where Embolden was third. Regardless, Another Miracle figures to pass tired horses late for a minor share.

Why is Turned Aside not a choice on top?

For one, his career-best effort came in the 5 1/2-furlong Quick Call Stakes (G3) after cutting back from 6-furlong races. The stretchout back to 6 1/2 furlongs on a European-style course is a concern, as he might prefer a more traditional course and less distance. Of course, there is no hard proof of that theory until he tries.

Also, Post 1 is not great for a speed horse on this course as the field takes a slight right-handed turn in 6 1/2-furlong sprints. He might need to work to establish position next to fellow speed horses Johnny Unleashed and Maven in Posts 2 and 3.

Perhaps those points are nitpicking. The value just seems kind of low on this odd, quirky course if Turned Aside inherits the favorite role after Kimari scratches.

Embolden and Competitive Saint are the ones to use in multi-race wagers, while Another Miracle might pick off tired horses late for a small piece. If the 12-1 Embolden does not fall lower than 5-1 during live betting, he is worth a simple win or place bet. The same advice goes for Competitive Saint, who is 8-1 on the morning line.