Analysis: Echo Town can challenge No Parole in Jerkens 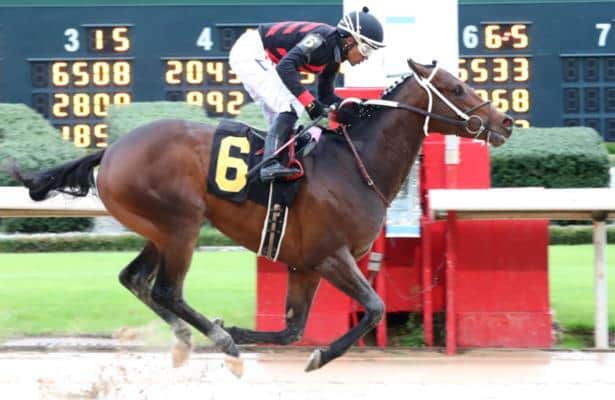 Unlike the other dirt graded stakes races at Saratoga on Saturday, the Grade 1, $300,000 H. Allen Jerkens Memorial Stakes offers a sizable field of 11 horses. It also features a deserved favorite in No Parole, but he is not a towering figure over these 3-year-old sprinters. As usual, it is time to discuss some alternative choices.

Unfortunately, the viable options are single digits. Bettors need to watch the live tote board and see if any of the horses below offer an overlay. In any case, the first horse to think about using is Echo Town.

Last month, No Parole defeated Echo Town in the Woody Stephens Stakes (G1) at Belmont, as well as Shoplifted and Mischevious Alex.

Three factors though that helped No Parole immediately stick out.

For one, TimeformUS coded the entire Belmont Stakes card in dark red, which means a firm speed bias that undoubtedly helped No Parole.

No Parole also led the entire for the entire race with a one length or more cushion, giving him an uncontested lead. Bias or not, it is hard to beat a quality horse with that kind of trip.

As a last point, No Parole took the field through moderate fractions of 22.31 and 45.01 for the seven-furlong race, which gave him a third advantage up front along with the biased surface and slight cushion.

With those three factors in mind, it is understandable that Echo Town failed to catch No Parole. But Echo Town closed some of the gap at least before losing by 3¾ lengths. In contrast, Shoplifted loomed up on the far turn and then lost ground, while Mischevious Alex lost ground too after tracking No Parole in second early.

Echo Town needs other horses to weaken No Parole this time, and that is possible given the presence of Eight Rings and Mischevious Alex again, both horses who need the lead for their best shot. If one or both of those speed horses tries to get aggressive with No Parole and challenge his lead, other horses can take advantage of the pace setup.

If not Echo Town, then Tap It to Win is one bettors need to consider.

To get the one big negative out first, Mark Casse trains Tap It to Win. Casse is completely cold at Saratoga and lacks one win as of this writing. But Tap It to Win might offer enough talent to overcome him.

Prior to the Belmont allowance, Tap It to Win stalked the pace in a six-furlong Gulfstream optional claimer before winning by 1 ½ lengths in his season opener. The speed figure was not fast, but it proves that he is capable of sitting off other horses when sprinting. Only in routes does Tap It to Win turn into a pacesetter because of the difference in pace.

Tap It to Win also recently set the pace in the Belmont Stakes before fading to fifth. Cross the race out, as nine furlongs proved too far.

On the strength of the June 4 win alone, Tap It to Win is a threat. Like Echo Town, he is capable of taking advantage of any speed duel.

Another contender to discuss is Three Technique, who enters off a 140-day layoff.

Three Technique last competed in the Rebel Stakes (G2), and he enjoyed a great position as other speed horses tried to soften up the pacesetter Nadal first. After No Parole and American Theorem took their shots and failed, Three Technique moved within range on the turn along with Silver Prospector. Both were repelled though by a resilient Nadal.

In midstretch, Three Technique flattened out and fell 7 ¾ lengths behind Nadal. He did manage to keep fourth in a good effort overall.

Back in January, Three Technique also finished second to Gold Street in the Smarty Jones Stakes, which is forgivable because Gold Street enjoyed an uncontested lead over the slop.

Go back in Three Technique’s record to last summer at Saratoga. On Aug. 31, he closed with an impressive rush to break his maiden locally by 5 ½ lengths at seven furlongs. He proved himself on this surface at the same distance configuration, which is great to know if betting him.

Three Technique will also offer a higher price than No Parole, Echo Town or Tap It to Win. But is he ready off the layoff? This is a tough spot to make a return.

With all the said, it is hard to leave off No Parole either. Despite his bias and trip-aided win in the Woody Stephens Stakes, he is a talented one.

No Parole has never lost a sprint race in four tries, including his two double-digit length victories over state-breds at Fair Grounds.

Also, No Parole's 126 TimeformUS Speed Figure for winning the Woody Stephens is the highest in the field, and that is not ignorable no matter the circumstances. It all depends on what the bettor feels is a fair price.

Even at single-digit odds, Echo Town, Tap It to Win, Three Technique and No Parole are the four options to think about using in the H. Allen Jerkens Memorial. It is understandable if bettors need to use more than four horses, as this is a tough race and not a great one to attack vertically or with a single horse. Rather, most people are better off spreading in multi-race wagers and moving on to the next one.

Town Cruise gets bet down and goes all the way in Woodbine Mile
Despite having never won a graded stakes, handicap...