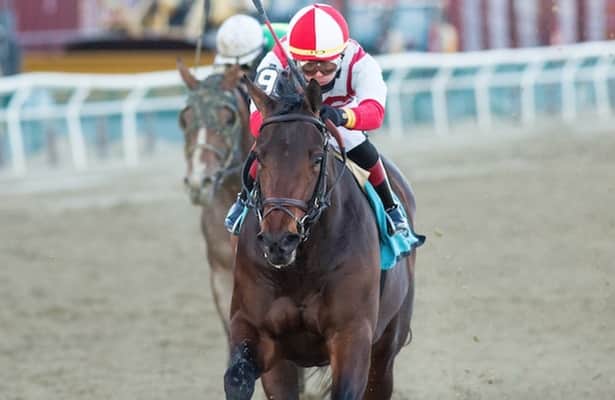 Two weeks ago, Summer Is Tomorrow led the Kentucky Derby to a pace collapse, which resulted in the 80-1 Rich Strike posting a huge upset. Although the $1.5 million Preakness Stakes at Pimlico on Saturday is not likely to open in the same fractions, it still could heat up with Early Voting leading.

Early Voting is a true pacesetter who made use of the style at Aqueduct to capture the Withers Stakes (G3) in gate-to-wire fashion and run second to Mo Donegal in the Wood Memorial Stakes (G2) by a neck.

Even though there is a chance Early Voting could get left alone with easy fractions, the more probable scenario is that either Armagnac or Simplification attempt to pressure him or even to contest Early Voting’s lead.

Armagnac competed for trainer Bob Baffert in his first three starts before transferring to Tim Yakteen before the Santa Anita Derby (G1). In that race, Armagnac could not make up any ground and remained in fourth for the entire race after getting held back as they went into the first turn.

About one month later, Armagnac set the pace in a May 8 optional claiming race at Santa Anita and led from gate to wire to win by 4 1/4 lengths. In his second career start in January, Armagnac also set the pace before breaking his maiden by 2 1/4 lengths. Those two races were the only wins of his career.

After a poor break in the Holy Bull Stakes (G3), Simplification rallied well enough to pick up second. One month later in the Fountain of Youth Stakes (G2), Simplification stuck to the closing tactics and won the race by 3 1/2 lengths for his first graded-stakes victory. In the Florida Derby (G1), Simplification went into the presser role and put Classic Causeway away earlier than expected before fading slightly to third in the stretch.

Two weeks ago in the Kentucky Derby, Simplification took advantage of the suicidal fractions from 15th and made up enough ground to finish fourth.

Why would Simplification show speed in the Preakness? From the rail, jockey John Velazquez might want to use Simplification’s speed to establish a good position and not get caught up in any traffic problems on the inside. Simplification might even aim for the early lead.

If Armagnac and Simplification do not put the heat on Early Voting, the expected heavy favorite Epicenter might end up doing the dirty work. After all, Epicenter was considered mainly a pacesetter until he used stalking tactics successfully from the pocket in the Louisiana Derby (G2).

After his 2 1/2-length win in the Louisiana Derby, Epicenter went into stalker mode in the Kentucky Derby and almost had the race won until Rich Strike snuck up to his inside and posted the upset.

Despite the loss, Epicenter performed well, considering the fractions.

To start his run on the Fair Grounds set of the Derby trail races last December, Epicenter pressed the quick Surfer Dude in the Gun Runner Stakes before putting the pacesetter away and winning by 6 1/2 lengths.

In the Lecomte Stakes (G3), Epicenter worked harder to maintain the lead through fast fractions and faced pressure from Surfer Dude in the first quarter. He continued to fight and finished second by a head.

One month later in the Risen Star Stakes (G2), Epicenter took advantage of a comfortable lead and won by an easy 2 3/4 lengths over Smile Happy in second, with the eventual Blue Grass Stakes (G1) winner Zandon in third.

From Post 8, Epicenter could easily press Early Voting from the outside if Simplification and Armagnac decide to attempt rating tactics instead. As shown in the Lecomte, Epicenter is capable of sticking around after fast fractions. If the pace happens to heat up, that is good to know.

Early Voting’s connections might recognize the pace threats and attempt to open up on the field early through blitzing fractions, as he did in the Withers Stakes (G3) against a weaker field. Sometimes pacesetters can run fast enough to the point where all the other horses become too tired to threaten late. In the stretch, Early Voting might stagger home, but he still could win using these tactics.

The most likely scenario is that Armagnac applies the heat on Early Voting with Simplification nearby and Epicenter two or three lengths behind them. As long as Simplification and Armagnac are present, Epicenter should receive a perfect setup as a stalker through a moderately fast pace and get first run on the leaders at the right time.