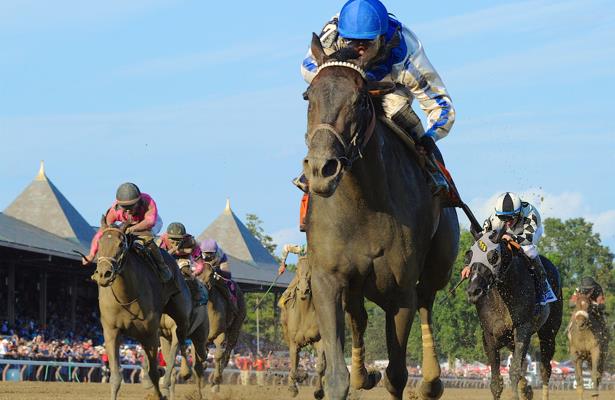 With three losses in five starts in 2019, Elate is not invincible on paper. The 5-year-old mare burns money more often than not, with losses at even money and 6/5 to kick off her campaign. More recently, she lost at 4/5 as Saratoga's Personal Ensign (G1) favorite.

Given rain is forecast for Sunday in Lexington, Ky., there is another opening for Elate to lose in the Grade 1, $500,000 Spinster Stakes at Keeneland. Elate is 3: 1-1-1 on wet dirt, with one of her losses coming in the Apple Blossom Handicap (G1) earlier this year over a "good" Oaklawn Park surface.

In this five-horse field, there are two fillies who can upset Elate: Dunbar Road and Vexatious. The former is the more obvious thread.

While Dunbar Road is only a 3-year-old filly with five starts, she won four of those races and ran a close second in her only loss. The lone defeat came in the Gulfstream Park Oaks (G2), where a speed bias hurt closers.

After Dunbar Road rebounded in a Belmont allowance race with a 5 ½-length win, she returned to graded competition one month later in the Mother Goose Stakes (G2). In this start, Dunbar Road moved clear in the stretch by 2 ½ lengths after overcoming a slow pace.

More recently, Dunbar Road won the Alabama Stakes (G1) at Saratoga over the slop to capture her first Grade 1 victory.

After taking mud on the inside in the initial stages of the race, Dunbar Road closed from seventh to finish first by 2 ¾ lengths. She won over Point of Honor, the Black-Eyed Susan Stakes (G2) winner earlier this year, and Street Band, the eventual Cotillion Stakes (G1) victor at Parx Racing.

With the win, Dunbar Road also proved capable of handling wet dirt. Her pedigree tipped handicappers in that direction, as this is a Quality Road filly out of a Bernardini mare. Bernardini is one of the better mud sires.

Although Dunbar Road's top TimeformUS Speed Figure is a 119, below Elate's 2019 high of 124, given she is progressing her best could change.

As long as Dunbar Road starts as second choice or higher, she is fair value Sunday.

Vexatious flashed early promise by finishing third in the 2017 Fair Grounds Oaks (G2) and Fantasy (G3), as well as fourth in the Kentucky Oaks.

For whatever reason, Vexatious did not progress from there. In 2018, her best efforts came on turf toward the end of the year, when she finished second by a neck in the Dowager Stakes (G3) at Keeneland and third by a length in the Red Carpet Handicap (G3) at Del Mar. She also won the CTT and TOC Stakes a few months earlier, also at Del Mar.

But this year, Vexatious looks more consistent in numbers, even though the finishes do not reflect this yet. Under new trainer Jack Sisterson, this mare ran fifth in the New York Stakes (G2) at Belmont behind Homerique, second in the Modesty Handicap (G3) at Arlington to Juliet Foxtrot and a hard-fought second by a neck to Blue Prize at Saratoga in the Summer Colony Stakes.

In 15 previous starts, Vexatious never broke 111 on dirt and only hit 117 once on turf.

Vexatious also ran an excellent race visually in the Summer Colony. She sat right off the leaders in third through opening fractions of 22.96 and 47.28, fast fractions for a nine-furlong race at Saratoga.

At the top of the stretch, Vexatious held the lead, with Blue Prize outside taking dead aim at her. When Blue Prize accelerated, Vexatious initially did not give up. Only toward the end did Vexatious get a little tired. But she accomplished more work than Blue Prize by running closer to the pace.

Vexatious handles wet dirt, too, as her fourth in the Kentucky Oaks shows. With some luck, she can win this race.

But despite some disappointing losses, Elate remains a tough mare to beat.

In May, Elate won the Fleur de Lis (G2) at Churchill Downs by 1 ½ lengths over Blue Prize to rebound after two losses. Then she won the Delaware Handicap (G2) by 4 ½ lengths at 10 furlongs. The recent loss to Midnight Bisou in the Personal Ensign Stakes (G1) is excusable.

Elate prefers 1 ¼ miles, though. Even if she won the Fleur de Lis at nine furlongs, she seems less imposing at this distance. If Dunbar Road or Vexatious handle wet dirt better, the cutback in distance and slop could be enough for Elate to go down as a heavy favorite.

Taking a shot against Elate is not a waste of a bet, as some handicappers call it, but rather the only way to play this race vertically (if at all). In horizontal wagers, however, Elate and Dunbar Road belong in the A slots, while Vexatious is a close B.