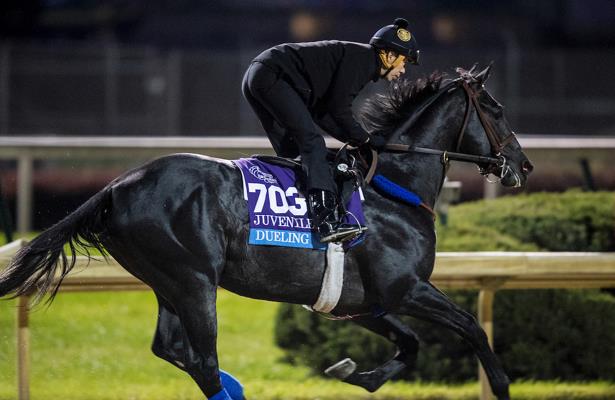 Defeating Bob Baffert runners in the Grade 1, $300,000 Los Alamitos Futurity on Saturday does not look like an easy task. Since the race moved from Hollywood Park to Los Alamitos in 2014, the multiple Triple Crown-winning trainer has won every edition. For this renewal, he starts Mucho Gusto and Improbable, two undefeated horses.

Nevertheless, two trainers that capable of challenging Baffert out west are Jerry Hollendorfer and Richard Mandella, and in this race they start Dueling and Extra Hope, respectively. Both 2-year-old colts are slow developers who could peak at the right moment.

Last month, Dueling finished a distant sixth by more than 15 lengths in the Breeders’ Cup Juvenile, which might give bettors some concern. Watching the replay, there is nothing too bad to point out with the trip, as he did receive every chance in the stretch to make his run.

If there is anything to note about the trip, jockey Manny Franco seemed to struggle handling Dueling on the first turn as he moved out of his rail position and appeared uncomfortable. In the stretch, an opportunity to rally with Signalman came up, but Dueling only held position late. Considering Dueling's lack of experience, that's an OK effort.

The connections must think highly of Dueling considering they threw him into such a prestigious Grade 1 race off a maiden win. He gets a pass for the Breeders’ Cup effort.

Is there anything to discuss from the maiden score? Dueling earned a low 97 TimeformUS Speed Figure for winning a one-mile maiden race at Santa Anita on Sept. 28. But the chart is notable because Extra Hope finished fourth, and he returned to wallop the same horses, Magnificent McCool and Street Class, having added blinkers on Oct. 21.

One can also argue Dueling faced a different version of Extra Hope on Sept. 28. Maybe he changed once Mandella added the equipment. That is a fair observation. Regardless, Dueling owns plenty of upside and can make the exotics interesting, if not win.

Extra Hope is capable of upsetting the field as well, and he comes out of the seven-furlong Bob Hope Stakes (G3) at Del Mar, where he finished an even fourth after receiving a good trip. He saved ground on the turn and switched out in the stretch.

Like Dueling, the real reason to consider Extra Hope is his maiden win. As mentioned above, he romped that day, crushing the field by more than eight lengths.

Did the blinkers help Extra Hope, or was it the added distance? Extra Hope broke his maiden in a 1 1/16-mile race, but one race earlier in his form he ran a flat fourth in a one-mile race on the same track. Previously, he lost both sprint tries at Del Mar.

Extra Hope’s damsire is Tiznow, and horses with Tiznow in their immediate bloodline tend to develop slower than others. Maybe his improvement is attributable to three factors combined: distance, blinkers and normal growth. As long as Extra Hope is third choice or higher, he deserves consideration. He should sit in a nice stalking position.

Now to discuss the two favorites.

Most handicappers do not need help analyzing an undefeated Baffert horse, but there are some points to nitpick with both his horses. In Mucho Gusto’s case, he likes to set the pace, let the field come back to him on the far turn, and then open up again.

Mucho Gusto went through this scenario to win the Bob Hope.

Also, Mucho Gusto drew an inside post in that race, and now he gets an outside post in the Los Alamitos Futurity. According to the TimeformUS Pace Projector, Improbable and Savagery own the speed to contest the lead early. If Mucho Gusto is forced to sit off one or two horses, can he still run the same race late?

For what it is worth, TimeformUS awarded Mucho Gusto a 109, higher than the 104 earned by the highly touted maiden special weight winner Coliseum -- another Baffert horse -- earlier on the same card. Given his expected low odds, Mucho Gusto is a tough horse with which to make money. But the colt is talented.

Improbable won the one-mile Street Sense Stakes at Churchill Downs after sitting about one length off the leaders. He then drew off in the stretch to win by over seven lengths. There are one or two points to critique about this otherwise dazzling performance.

Jockey Drayden Van Dyke did hit Improbable with the whip a few times in the stretch. Sure, Improbable still dominated the field, but it looked closer to an all-out effort than an effortless romp.

Because Improbable won by a wider margin than Mucho Gusto, it is easier to favor him. In reality, both horses are probably around the same level. With all that said, Improbable is obviously a major contender in this race, as is Mucho Gusto.

Savagery gets some space in this analysis, too, for finishing second in the Bob Hope, and the main concern with him is the running style. If he flashes his usual speed, Improbable and Mucho Gusto may sandwich him in the initial stages. Plus, Savagery’s last four races came in sprints, while he faded in his only route try, albeit on turf.

It is also noteworthy Savagery's four siblings made 78 combined starts overall, and 63 of those races came in sprints.

King of Speed completes the field coming out of a 12th-place finish in the Breeders’ Cup Juvenile Turf. Previously, he won the Zuma Beach and Del Mar Juvenile Turf. The son of Jimmy Creed lost his only two dirt starts last summer.

Considering the dam Beautiful Daniele made 14 of 18 career starts on turf, it seems like a grass family without thinking any further. The damsire A.P. Indy is noted as one of the greatest dirt influences in the country, however, so these are mixed signals.

In conclusion, Mucho Gusto and Improbable are the best horses on paper, but do not completely discount Dueling and Extra Hope. Baffert’s Futurity streak will end at some point, and when it does, the winner will pay off decently.

Champion Storm the Court tries turf in Del Mar's La Jolla
Eight 3-year-olds will test their mettle over a mi...

Ellis Park Derby a reunion for Art Collector owner Lunsford
Bruce Lunsford grew up in Kenton County, where the...