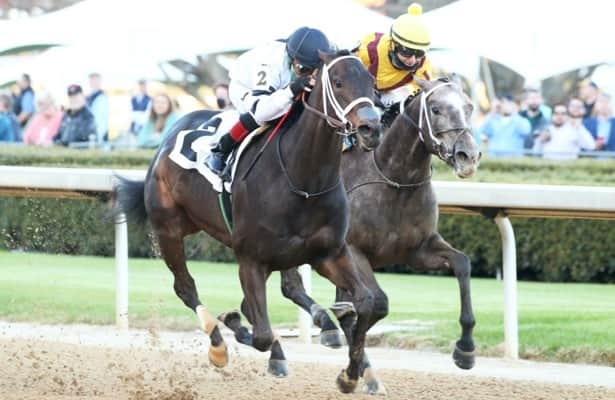 You might be looking for long shots in Wednesday's $300,000 Indiana Derby (G3) nor the $200,000 Indiana Oaks (G3) at Indiana Grand, considering that neither features one single horse to rely on.

Some handicappers might try to single Fulsome in the Derby, but it is not as clear as it might seem at first glance.

Here are ideas for the Indiana Oaks and Derby, including two double-digit long shots to consider.

Will’s Secret and Soothsay are the lowest-priced options on the morning line. Both fillies can win this race, but neither one provides a ton of confidence.

In the case of Will’s Secret, she did finish third in the Kentucky Oaks. With the rail draw and a closing style, there is a chance she ends up with traffic problems.

Lovely Ride is the most exciting filly in this race and sits at a fair 4-1 on the morning line. In her most recent start on May 14, Lovely Ride won an optional claiming race at Churchill Downs by 6 1/2 lengths with a 108 on TimeformUS. The third-place finisher Moon Swag was a familiar name on the Kentucky Oaks trail, with third-place finishes in the Silverbulletday and Rachel Alexandra Stakes (G2).

If Lovely Ride takes another step forward, she probably wins.

For a tempting long shot, consider 12-1 Marion Francis, who took a step forward in her May 28 optional claiming win at Churchill Downs. She won by three-quarters of a length over a good filly in Mucho Macho Momma, with Fairchild 3 1/2 lengths back in third.

None of Marion Francis’s speed figures is fast, but she will travel in a perfect position running in the clear and a few lengths behind the main speed. In addition, it is hard to ignore the combination of trainer Brad Cox and Florent Geroux.

Fulsome is the most probable winner. In his most recent start, he won the Matt Winn Stakes (G3) at Churchill Downs over Derby also-rans O Besos and Helium. With his Matt Winn victory he also owns the high TimeformUS figure of 114.

It is a concern Fulsome beat nothing of quality in the Matt Winn. Notice that Helium, Southern Passage and Ready to Pounce all lost their next starts.

There are at least three other horses with a chance.

Mr. Wireless ran second by three-quarters of a length in the Texas Derby at Lone Star Park. He only needs to build on that effort to compete for the top slot in this race.

Starrininmydreams initially disappointed on the Derby trail with a ninth in the Risen Star Stakes (G2). He took a step forward with a fifth in the Louisiana Derby (G2), with Hot Rod Charlie, Midnight Bourbon, O Besos and Proxy ahead of him.

In his last try on the Derby trail, Starrininmydreams was an excellent third in the Lexington Stakes (G3) after trying to chase a wicked pace. However, he could not back up the effort in the Pat Day Mile (G2) and ran a dismal seventh by 11 1/2 lengths. If Starrininmydreams can run back to his Lexington effort where he withstood the pace, he could win.

For a double-digit long shot, also consider Full Charge. Forget about his first two starts and focus on his last two races.

In a May 14 maiden race at Churchill Downs, Full Charge was second by three lengths to Southern District, who will likely develop into a good horse under Chad Brown. In the results chart, note the large gaps between each horse. Besides the three lengths between Southern District and Full Charge, another 3 1/4  came between Full Charge and American Law. Then American Law had 7 1/2 lengths on the fourth-place Derby House with another 7 1/2 lengths to Bamalama in fifth.

Spaced-out margins are the sign of a quality race. It is no surprise Full Charge took a step forward and broke his maiden by five lengths at Churchill on June 19.

The only concern is that Full Charge broke his maiden at 1 3/16 miles and cuts back to 1 1/16 miles. But the runner-up effort May 14 was at 1 1/16 miles. Perhaps Full Charge wants a longer route, but he is not a slouch at this distance either.

At 12-1, it might be worth playing Full Charge to win and place. He also might work better as a back-wheel key in second underneath the three horses discussed above.