Analysis: Collusion Illusion has most upside in Bing Crosby 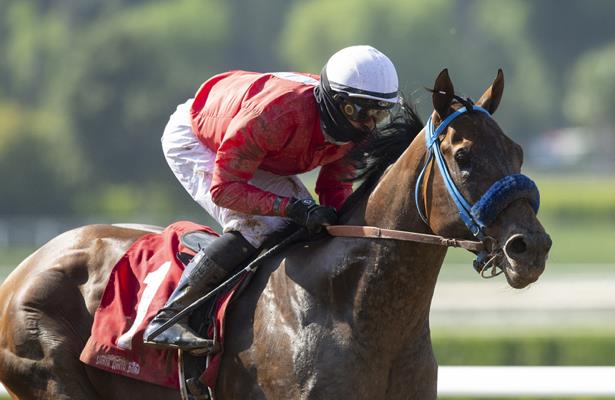 McKinzie headlines the Grade 1, $250,000 Bing Crosby Stakes at Del Mar on Saturday. As the class of the field, he deserves his role as the heavy favorite. McKinzie’s recent form is not perfect, though, which means it is time to search for a value option or two.

In this race, the 5-year-old McKinzie brings two questionable efforts to the table in two tries this year. Most recently, he ran fifth in the Metropolitan Handicap (G1) at Belmont Park, only two lengths behind a sharp gate-to-wire winner in Vekoma.

A fifth in the Met Mile is usually not a terrible effort, but he did not seem like himself.

McKinzie traveled outside in mid-pack through the early stages before widening on the turn to set up a wide stretch rally.

After McKinzie took aim at the top of the stretch though, he flattened out.

McKinzie failed to show the same kind of kick as he did last year when second in this race after traffic problems. A clear path did not help him.

Visually, he just seemed flat. McKinzie earned a 121 on TimeformUS for the fifth-place effort, nine points less than his 2019 Met Mile figure.

Combine McKinzie’s disappointing Met Mile effort with his Triple Bend Stakes (G2), and his overall recent form is more questionable. Granted, McKinzie won the Triple Bend at Santa Anita in June, but he only won by 1 1/2 lengths over Fashionably Fast, with Dark Vader a neck behind.

On paper, McKinzie is supposed to crush Fashionably Fast. Fashionably Fast did enter the Triple Bend with four straight stakes wins, but those victories came against Cal-bred restricted company and he won by narrow margins each time. As for Dark Vader, he barely won a local optional claimer on July 25 in his next start.

McKinzie earned a 118 on TimeformUS for the narrow Triple Bend win, which is lower than the pair of 127s he turned in at the start of 2019.

As a final concern, this is McKinzie’s six-furlong debut. Perhaps McKinzie crushes the field, but it feels fair to think about other horses.

One interesting alternative is Collusion Illusion in Post 9, who offers lower speed figures but promising upside as a 3-year-old colt on a roll. (Collusion Illusion also is listed as probable for the H. Allen Jerkens at Saratoga on the same day, but this was written on the assumption that he will stay at Del Mar for the Bing Crosby.)

Collusion Illusion flashed talent on this course last summer by breaking his maiden at first asking and closing to win the Best Pal Stakes (G2) by 1 1/4 lengths. Bu at Santa Anita, Collusion Illusion struggled in the American Pharoah Stakes (G1) and eased to the wire in the stretch.

Either Collusion Illusion did not handle the soft dirt surface at Santa Anita, or a physical problem bothered him and resulted in the subsequent 233-day layoff.

Collusion Illusion then tried a soft edition of the Lazaro Barrera Stakes (G3), and he won again by 3 1/4 lengths after tracking the uncontested pacesetter Ragtime Blues.

Watch Collusion Illusion mow down Ragtime Blues in a professional manner. Once he reaches the front, Flavien Prat puts down the stick.

For those two victories Collusion Illusion earned only a 111 and 109. But it is notable that TimeformUS adjusted down the May 17 figure from a 115.

Because of his upside and value price, Collusion Illusion is the choice.

To touch upon Desert Law quickly, he deserves a look too because of his running line pattern in the Thor’s Echo Stakes.

Desert Law shows a minor Z pattern, which means he lost some ground at one point before gaining it back in the stretch run. The angle, which is found in Picking Winners, is usually a profitable one to consider.

While Desert Law proved no match for Tiger Dad, who finished two lengths ahead in first, the race also marked his first start off a significant 322-day layoff. His previous start before the layoff came in this race one year ago, when he closed for a good second to Cistron.

Given Desert Law’s Z pattern and previous experience in the Bing Crosby, he is a third contender to consider if the budget allows.

Collusion Illusion is the main choice. He projects to settle in the clear somewhere outside in mid-pack. Assuming the pace is moderate to fast, he can make an unobstructed run and pull off the minor upset. For multi-race wagers, McKinzie is logical to include as a backup in case he wins on class. If throwing in a B or C option, think about Desert Law.