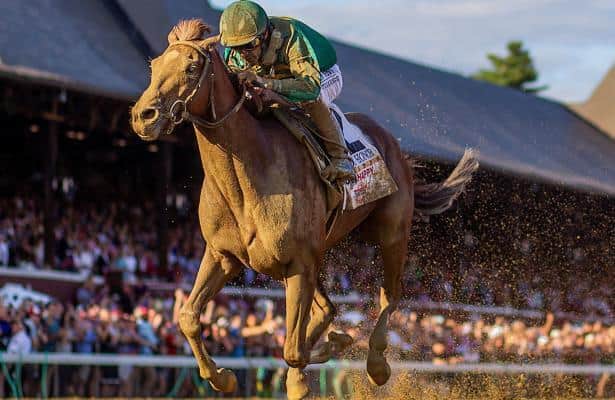 When evaluating Code of Honor in the Grade 3, $250,000 Philip H. Iselin Stakes at Monmouth Park, there are negative points to consider before playing the son of Noble Mission. This is a well-known runner from the 2019 Kentucky Derby last seen on the decline in form earlier this year at Gulfstream.

Today, Code of Honor is a 5-year-old horse who carries a five-race losing streak into the Iselin and makes his first start off a seventh-month layoff. Yet his popularity as a former Derby horse means the public will not give his backers a break in odds. In most cases, bettors are eager to forgive an old favorite such as Code of Honor.

His best days came as a 3-year-old, when he won the Fountain of Youth Stakes (G2), Dwyer Stakes (G3), Travers Stakes (G1) and Jockey Club Gold Cup (G1) for Hall of Fame trainer Shug McGaughey. He also ran second via disqualification in that year's controversial Kentucky Derby. At the end of the season, he was seventh in the Breeders’ Cup Classic. Regardless, the one misstep is forgivable considering he made his debut against older horses in the Classic.

As a 4-year-old, Code of Honor did not progress. He began his 2020 campaign well enough by winning the Westchester Stakes (G3). But then Code of Honor was arguably a flat third in the Metropolitan Handicap (G1). After the disappointing Met Mile effort, Code of Honor then ran fourth in the Whitney Stakes (G1), second in the Kelso Handicap (G2) and second in a mild edition of the Clark Stakes (G1).

In this year’s Pegasus World Cup (G1) in January, Code of Honor did not fare any better than his 2020 starts. In fact, he arguably regressed with a flat fifth-place finish, 10 lengths behind the impressive Knicks Go.

Code of Honor traveled within range approaching the far turn, and he even seemed ready to strike for a few moments.

But when the real running began, Code of Honor did not progress.

Code of Honor did not necessarily seem tired. Rather, he gave the impression of an uninterested horse in the Pegasus World Cup.

From a betting standpoint, why trust Code of Honor off the declining form and layoff? Backers can argue that maybe the class drop and change in racetracks will give him a better chance to win. This time, Code of Honor is racing at Monmouth in a Grade 3, and his last win came in a Grade 3 when he won the Westchester Stakes at Belmont in preparation for the Met Mile.

Then again, why is Code of Honor racing at Monmouth? If this horse was training like a horse ready to fire, he could begin his comeback at Saratoga, possibly in the Jockey Club Gold Cup (G1) on Sept. 4. The historic 10-furlong race is now part of closing weekend at this meet. In addition, there was the Whitney Stakes (G1) earlier in the meet, or even the ungraded Alydar Stakes won by the returning Art Collector.

McGaughey is based at Saratoga, yet he chose to send Code of Honor to Monmouth to face soft Grade 3 opponents.

With Code of Honor returning off a significant layoff at a lesser track than Saratoga, it makes sense to use caution. Maybe McGaughey is not sure whether Code of Honor can run against Grade 1 competition, and he is using the Iselin Stakes to gauge his current level.

Sure, Code of Honor can win the Philip H. Iselin. But is he a good bet given the questions surrounding him? The answer is debatable. On his best day, he is the best horse in the race. However, his questionable form and layoff means that fair value is supposed to shift upward to a more attractive price. But his popularity means that will not happen, especially not in a Grade 3. Backers will take a low price.

With that said, perhaps the competition is weak enough that Code of Honor will find a way to win, even without his best form. But if Code of Honor wins, that does not necessarily mean he is a good bet. There are probably more reliable horses on the card that will run at the same odds as Code of Honor in the Iselin.

If Code of Honor does win, then that is a great result for racing. Assuming he passes this first test, maybe Code of Honor can find his way back to the highest level and make one more run at the Breeders' Cup.