Analysis: How did Cave Rock lose the BC Juvenile? 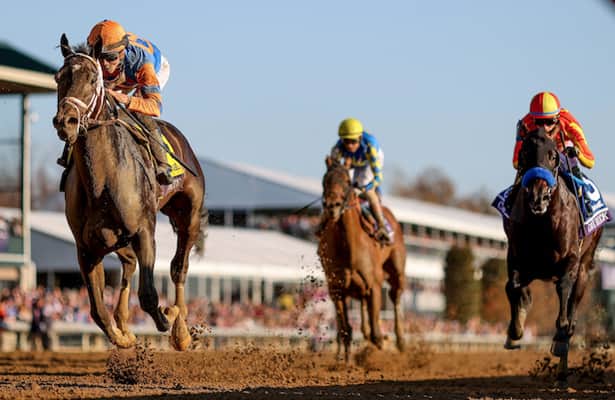 Cave Rock lost for the first time in his career at Keeneland last week in the Breeders' Cup Juvenile after Forte passed him in the stretch run and won by a decent margin.

The defeat eliminated the idea of Cave Rock as an unbeatable colt, at least for now. Forte had not been running the same speed figures, but he came out on top.

From a pace standpoint, Cave Rock deserves credit for dealing with a speedy long shot on the inside through the early stages and still finishing second by a good margin over his stablemate National Treasure in third.

Forte ran well to pass by both of them late and win, but Cave Rock arguably did more work than Forte overall because of the pace scenario.

Here is a recap of the Juvenile, focusing on Cave Rock's trip.

Note the start when Hurricane J under Joe Talamo goes to the front with Cave Rock under Juan Hernandez soon joining him. Hurricane J pushes out Cave Rock slightly before the first turn, but Cave Rock gains a slight advantage anyway while eventually running the initial turn a bit wide.

Why does Cave Rock travel three wide heading into the backstretch? Hernandez likely wanted to avoid a head-to-head duel with Hurricane J and ended up sacrificing ground to prevent the two horses from eyeing each other.

Cave Rock opened the race in fractions of 22.90 and 47.01 seconds. TimeformUS refrained from marking either fraction as fast, but that does not mean those two fractions were slow. Handicappers need to use their own mind to determine the effect of the pace.

Entering the far turn, Cave Rock also needed to keep his stablemate National Treasure at bay. He had moved up into second and a prime striking position as Hurricane J began to show signs of fatigue while still traveling in third place on the rail.

Then as the front pack rounded the far turn, Forte found a seam to the outside and switched out to set up his stretch rally. At this point, Hernandez asked Cave Rock for his best by giving him a few left-handed crop strikes, but the early pace took its toll. As stated above though, Forte passed Cave Rock and won the race by 1 1/2 lengths.

Cave Rock earned a field-high 119 TimeformUS Speed Figure for running second, while Forte earned a 117 for his victory. On TimeformUS, the loser sometimes earns the higher speed figure because of a fast or slow pace scenario. Because Cave Rock endured a fast overall pace, the team adjusted his initial 115 speed figure to a 119.

Even though Cave Rock ran on his wrong lead for most of the stretch, that is forgivable. Sometimes tired horses do not switch leads or they switch late, as Cave Rock eventually did.

To give some negative commentary, the loss does take away the idea of Cave Rock as some kind of monster. At the moment, this is a good colt with speed from the Baffert barn who is capable of winning Grade 1 races. But if he ships and the right horse shows up, such as Forte, in the Breeders' Cup Juvenile, Cave Rock could end up losing.

On the positive side, Cave Rock turned in a great effort to end up second. If racing fans liked Cave Rock before as a top 2-year-old, he remains in the mix after his runner-up finish in the Breeders' Cup. Given his sire Arrogate, Cave Rock still has room to improve as well. Remember that most Arrogate progeny hit their best stride later on.

Look for Cave Rock to bounce back on the West Coast and take at least one more Derby prep race.