Analysis: Caracaro has chance to upset Tiz the Law in Travers Stakes 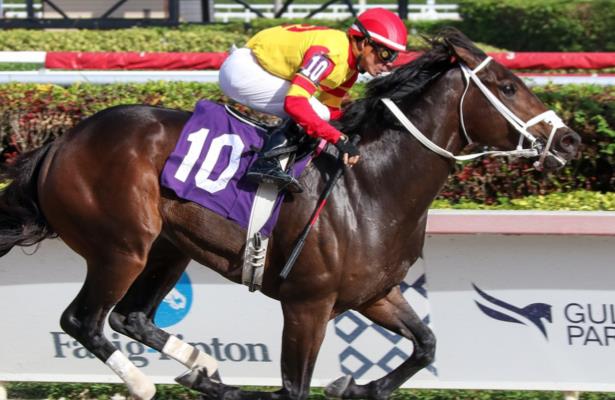 With the draw complete for the Grade 1, $1 million Travers Stakes on Saturday at Saratoga, it is time to decide whether Tiz the Law is the right play at a short price. The son of Constitution competes in an interesting field of eight 3-year-olds contesting the 1 1/4-mile distance for last-minute Kentucky Derby points.

Tiz the Law owns enough points already, which can raise red flags in terms of betting since most trainers will wait until the Derby to push their horse. But the situation is different with trainer Barclay Tagg and Sackatoga Stables behind Tiz the Law. These connections want the Travers as much as any other race.

To recap his season, Tiz the Law captured the Holy Bull Stakes (G2) and Florida Derby (G1) at Gulfstream before taking the modified Belmont Stakes in June.

For the most part, Tiz the Law’s winning streak appears safe, with only one possible upset player in Caracaro if he moves forward in his second start off the bench. Uncle Chuck becomes a bigger threat only if Shivaree scratches from the race.

Tiz the Law and Caracaro benefit from the Travers draw in two ways: outside post positions and other pace help to weaken the Bob Baffert-trained Uncle Chuck.

Why do Tiz the Law and Caracaro need other speed horses?

One of the biggest assets of Baffert-trained runners is their ability to take control of a race early, slow down in the middle part and draw clear in the stretch run. This scenario happens over and over again — to a frustrating degree for value bettors.

Because the speedy Shivaree is entered, the option of securing the lead is taken away from Uncle Chuck since he has only shown the ability to go to the front. From the rail, the longshot First Line also might provide some nominal speed early on.

Behind those three expected speed horses are Caracaro, Tiz the Law and Country Grammer. From Post 6, Tiz the Law is supposed to secure a good position next to Caracaro, or right behind if jockey Manuel Franco opts to let Caracaro cross over.

South Bend and Max Player should trail the field early.

On the far turn, it is easy to see Tiz the Law and Caracaro moving outside of Uncle Chuck and the pacesetter Shivaree (if Shivaree has not folded yet). At this point, it will not come as a surprise if Uncle Chuck weakens slightly, especially with his pedigree. Remember, this is a half-brother to the precocious Maclean’s Music and sprinter Kentuckian.

From there, Tiz the Law only needs to show his usual late punch to put Uncle Chuck away and hold off a last challenge from Caracaro or Country Grammer.

For those searching for an upset between Caracaro and Country Grammer, Caracaro is the better option because he is slated to improve with more fitness in tow. He ran second in his comeback off a six-month layoff in the Peter Pan Stakes (G3), falling to Country Grammer by only a neck.

Most horses peak in their second or third start off the bench.

Tiz the Law remains the most likely winner, but think about Caracaro. Young horses develop at a rapid pace, and he projects to enjoy a similar trip to Tiz the Law.

Uncle Chuck will probably fight in the stretch and hold second or third. But asking a horse to go from beating a four-horse field in the Los Alamitos Derby (G3) to winning the Travers is a lot. Granted, the runner-up Thousand Words went on to win the Shared Belief Stakes over a major Derby contender in Honor A. P., and Baffert is hard to discount.

Expect Max Player or South Bend to clunk in late for a piece.

What is the play?

Tiz the Law and Caracaro fit well on top, with Uncle Chuck and Country Grammer included too in the second slot of the trifecta or superfecta. From there, the bettor could add in South Bend and Max Player in third.

If that is too expensive, the Caracaro part could be played for less money, or braver players could single Tiz the Law or Caracaro.

Even if Caracaro moves forward, Tiz the Law could be getting stronger as time goes on as well. That is something to keep in mind if looking to upset him. But in horse racing, strange results do happen.

In any case, Tiz the Law is the main selection and Caracaro is the backup.

If Uncle Chuck somehow enjoys a slow to moderate pace even with Shivaree and First Line present, and if he draws clear in the stretch with reserved energy, hats off to him. His backers will deserve their profits.

July 31 - Analysis: Echo Town can challenge No Parole in Jerkens

- Result: Thousand Words upset the four-horse race. Note, this was written before Uncle Chuck and Anneau d'Or both scratched.

July 27 - Analysis: Collusion Illusion has most upside in Bing Crosby

- Result: Collusion Illusion ended up winning and paid $5.80 as the favorite

- Result: Turned Aside upset Jack and Noah and paid $6.50