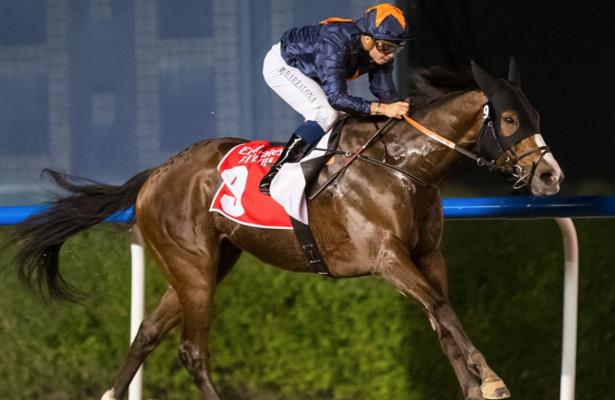 Choosing the winner in Saturday's $12 million Dubai World Cup (G1) at Meydan will prove difficult, as it lacks a true American standout. No horse with the kind of stature California Chrome or Arrogate are entered this time around, plus defending champion Thunder Snow ran a flat race upon return last month in a local prep race.

While Thunder Snow and a few Americans with tactical speed remain part of the discussion, another foreign-based speed horse looks more interesting in Capezzano.

Capezzano defeated Thunder Snow on March 9 in Al Maktoum Challenge Round 3 (G1). Better yet, the way Capezzano accomplished the task is impressive, as he worked to cross over before the first turn, and repelled Thunder Snow late.

On the final turn, Thunder Snow made a menacing move to switch out from his inside position and range up alongside Capezzano. But once Capezzano changed leads, he got a second wind and powered home by 9 1/2 lengths.

By winning the 10-furlong race, Capezzano answered the distance question. On pedigree alone, Capezzano is bred to love routing as a son of Bernardini and the dam Cable Knit, a half-sister to ill-fated Irap, who ran third in the 2017 Travers (G1) and second in the Pennsylvania Derby (G1).

But handling a longer distance is still a question until it is answered, and he did.

Capezzano’s previous four wins came at one mile or less, including a 14-length win in the local Mina Rashid Handicap in January. Note the eighth-place finisher Honorable Treasure, who Americans will recognize.

Prior to that point, Capezzano did not appear so flashy. In last year’s Al Maktoum Challenge Round 3, he finished a distant seventh by 48 lengths. He also competed in the Godolphin Mile (G2) to close his short 2017 campaign and ran 13th out of 14.

Perhaps the 5-year-old gelding matured in recent times. Thunder Snow could turn the tables in his second start off the bench, but the momentum belongs to Capezzano.

He might offer value in the pari-mutuel pool, too, as most Americans do not know him.

As for the U.S. shippers, it makes sense to favor ones with speed over this surface. But none of them are truly that type.

Pegasus World Cup (G1) runner-up Seeking the Soul is logical, as he does possess some tactical speed. With a third-place finish in the Clark Handicap (G1) at Churchill Downs and a second-place run in the Breeders’ Cup Dirt Mile to City of Light, his proven class is obvious.

No one will mistake Seeking the Soul for a superstar, but he is certainly a contender.

If searching for another option with tactical speed, Pavel shows up again. He recently ran poorly in three straight races, including the San Pasqual Stakes (G2), the Champions Cup (G1) over in Japan and the Breeders’ Cup Classic last fall.

But the San Pasqual was on a sloppy racetrack, while the other two races were difficult races. The Dubai World Cup came up slightly soft this year, and he adds blinkers for trainer Doug O'Neill, who's looking to get his horse in the race earlier.

The Dubai World Cup is tough in most years. This year it lacks a punch, giving an opening to horses normally considered secondary contenders in Grade 1 races.

Audible is the next American to discuss, and he does possess a bit of speed if he feels displaying it. In the Pegasus World Cup, Audible settled around seventh or eighth early before moving as high as fourth, and that is typically his style. But in the Holy Bull Stakes (G2) last year, Audible actually sat close to the leader in third before winning.

He also initially broke well in the Florida Derby and momentarily held third behind the speed dueling Strike Power and Promises Fulfilled, then took back to last.

Pointing out examples of Audible’s speed is important because only a superstar such as Arrogate can come from behind on this dirt course and still win.

The two most talented Americans in this race, Gunnevera and Yoshida, are closers and will become compromised if they showcase their usual style. When forced to choose between them, Yoshida holds a slight advantage as he displayed tactical speed in some of his prior turf races, while Gunnevera is most likely stuck in his ways.

Track bias aside though, both of them are quality runners.

Yoshida finished sixth in the Pegasus World Cup Turf Invitational, but it came off a layoff. Previously, he finished fourth in the Breeders’ Cup Classic and won the Woodward Stakes (G1). Trainer Bill Mott is no stranger to winning this race, either, as he trained the legendary Cigar, who won the inaugural edition in 1996.

Gunnevera finished an even sixth in the Pegasus World Cup. Last year, though, he finished second and ahead of Yoshida in the Breeders’ Cup Classic. One race prior to that, he ran behind Yoshida with a runner-up finish in the Woodward at Saratoga.

Another American to discuss is Axelrod, the second-place horse to McKinzie in last year’s Pennsylvania Derby (G1). He showed nothing in his local prep race, the Burj Nahaar. According to this Brisnet report, he was also “‘mildly lame’ in his left front.”

Phoenix Thoroughbreds stablemate Gronkowski shows up in this race as well, and he definitely does not possess the right style. In the Al Maktoum Challenge Round 3, he could only close for a mild fifth.

If using a closer from that race, it makes more sense to either go with Dolkong, who came at the last second for third, or New Trails, who out-kicked Gronkowski for fourth. Dolkong and New Trails are two more unknown to Americans, giving them better value.

But my choice is with Capezzano, regardless of how the post draw plays out. If he is capable of securing the lead from outside, then any gate is fine.

Considering how average the American horses appear in this Dubai World Cup, it might end up another year where a horse based somewhere else wins. Give the foreigners a closer inspection this time while favoring the Americans with speed.