Can My Boy Jack duplicate his Southwest win on fast dirt? 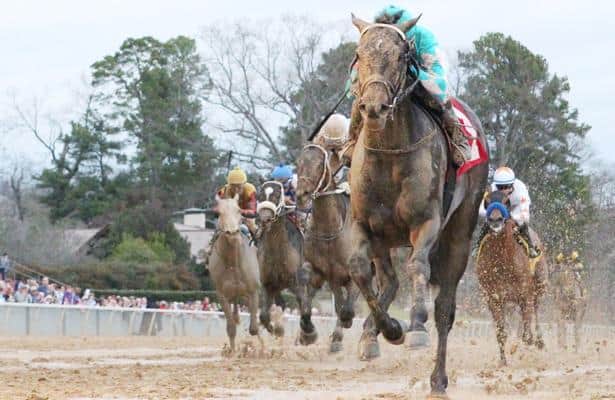 Trainer Keith Desormeaux and jockey Kent Desormeaux won Monday's Grade 3 Southwest Stakes at Oaklawn Park with My Boy Jack over a muddy track, and it all sounds a bit familiar. Just two years ago, the two brothers won the Santa Anita Derby with Exaggerator over the slop, as well as the Preakness and Haskell Stakes over wet dirt as well.

Exaggerator became known as a mud specialist. Although he finished second in the Kentucky Derby the same year, the surface arguably had a bit of moisture from rain earlier in the week. Now the question becomes whether My Boy Jack will turn out to be a mud specialist, too.

From a pedigree standpoint, My Boy Jack’s dam side leans heavily towards favoring mud or sloppy tracks. His second dam Gold N Delicious won five races in her career, and three of those wins came on wet dirt.

One of those victories came in the 1997 Fleur de Lis (G3) over slop by a small margin. Two other off-track wins by Gold N Delicious came against allowance competition by margins of eight lengths and a little more than five lengths. She loved racing on a wet track.

Gold N Delicious was bred to Mineshaft, and together the pair produced My Boy Jack’s dam, Gold N Shaft. Mineshaft is a son of A.P. Indy, and horses who descend from that line of sires tend to handle wet dirt. Therefore, My Boy Jack’s dam is bred with mud influences on top and bottom.

Pedigree handicapping is not an exact science, though. It is important to look at what a horse has done, rather than be stuck on bloodlines.

In his career debut, he ran a flat sixth in a maiden sprint. That is forgivable because horses need one start as a learning experience.

More recently, My Boy Jack ran third in the Sham Stakes (G3) on fast dirt. He lost by seven lengths to the highly regarded McKinzie.

But the horse he beat for third, Shivermetimbers, disappointed badly by running seventh in the Robert B. Lewis (G3). Also, the runner-up All Out Blitz failed to capitalize on a fast pace in the San Vicente Stakes (G2).

In the Southwest Stakes, My Boy Jack looked like a different horse shooting up the rail. He won in a dominant fashion, not unlike how Exaggerator took the Santa Anita Derby in 2016 with a sharp move.

To give alternative reasons for why My Boy Jack fired yesterday, the golden rail at Oaklawn likely helped the performance. One race earlier in the Razorback Handicap (G3), the 8-year-old Hawaakom came to life and won by shooting up the rail, taking his first graded stakes win in 40 starts.

Furthermore, My Boy Jack received the right setup. The first two finishers were ninth and seventh after a half mile, while pacesetter Mourinho appeared to hit a wall. Early presser Road to Damascus (who admittedly had little chance) fell back to ninth place.

A lot of people thought Exaggerator just needed the right pace to make his move, not rainy weather.

As for why fellow closer Zing Zang did not capitalize on the pace, either the outside lanes were slow and heavy, or he ran a disappointing race.

Regardless, My Boy Jack is worth playing against on fast dirt next time. If he wins, then the connections hold a versatile horse in their hands.

He only earned a 114 TimeformUS Speed Figure, and the race flow seemed to favor front runners.

Is he still one to watch?

Tiznow progeny develop slowly, so it is possible there is another step forward. Supporters should still find some value in him going forward.

It is too early to give up on Instilled Regard or Noble Indy. Both remained in the mix until the end, and they could improve in their next starts too.