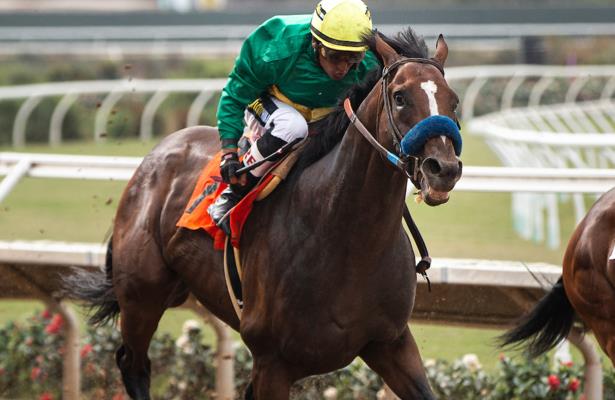 As is quite obvious to anyone who's ever watched a race there, Kentucky Downs is a different kind of turf course compared to the most in the U.S. It features elevation changes, extra twists and grass that isn't necessarily cut as close as what you see on most American lawns.

Therefore, it makes sense to pick horses with successful experience on this quirky course. Not every horse will embrace such a unique challenge.

With that said, in the Grade 3, $1 million Kentucky Turf Cup on Saturday at Kentucky Downs, there are two horses with at least one win on this course: Arklow and Campaign. And they clearly look like the ones to beat.

The former is the defending champion and will start as the deserving favorite. But it is easy to forget Campaign is 2-for-2 on this course.

Last year, Campaign ran for Steve Asmussen. He made his turf debut at Kentucky Downs in his third career start and won by 5 ½ lengths with an early move in a 1 ½-mile race. Regardless of the competition, it is nice to see Campaign can handle the course configuration for this distance.

In his next start, Campaign took on an allowance race on this same course at the shorter 1 5/16-mile distance. Again, he came from way behind.

For about half the race, Campaign did not even appear in the picture.

But around the two-minute mark, he began to make a move through the rail. He switched out slightly to avoid a fading horse, then shot through a small opening in the last few moments to edge out Zumurudee.

Zumurudee went on to finish second in a Keeneland turf allowance before winning a Fair Grounds allowance by 4 ½ lengths and finishing third in an optional claimer. More recently, he won a Keeneland allowance in April.

Campaign gave the Sycamore Stakes (G3) at Keeneland an attempt in the fall but finished a dismal 10th by 13 ¾ lengths.

He returned in February with the same ownership but a new trainer in John Sadler. He then turned into the dirt marathoner fans know with wins in the Tokyo City Cup (G3) and Cougar II Handicap (G3), as well as a close fourth in the Brooklyn Invitational (G2).

But Campaign ran successfully on grass at Kentucky Downs before, and there is no reason to believe he cannot win again now.

The only negative is his running style, which might bring traffic into play. As seen on video, though, Campaign is nimble-footed when it counts.

Arklow owns a bit more early foot than Campaign. When he won this race last year, he initially broke eighth and 5 ¼ lengths back.

But he got into striking position around the turn, finding himself right behind the two leaders. He then did well to hold off Bigger Picture late.

Oddly enough, Arklow is winless in six starts since that race, but his form appears in tact. He finished second in the Sycamore and then fourth in the Breeders' Cup Turf, 11 ¾ lengths behind European stars Enable and Magical.

To start off his 2019 season, he lost his rider in a Keeneland allowance before going on to run second in the Man o' War Stakes (G1) and Belmont Gold Cup (G2), and third in the Bowling Green Stakes (G2) at Saratoga.

For whatever reason, Arklow hasn't been able to finish off the job. Getting back to Kentucky Downs might help him. But it's tough to accept a low price on a horse on a long losing streak.

Even though Arklow is a major contender, Campaign is preferred here.

While this is a large field, the other entries aren't so intriguing.

For instance, the first four horses from the Kentucky Downs Preview Kentucky Turf Cup Stakes at Ellis Park show up in this race. But how can bettors separate them? Those four horses finished 1 ¼ lengths apart in a lower-class race.

Also, the third-place My Boy Jack is a familiar name, but previous to the Ellis Park race, he ran sixth in an optional claimer at Churchill Downs. If My Boy Jack lacks class, how good could Factor This, Botswana and Zero Gravity possibly be?

Zulu Alpha is 9-2 on the morning line. But he did not handle this course in this race two years ago, finishing 10th by 22 ½ lengths.

Blended Citizen is an interesting shipper who finished fourth in the Del Mar Handicap (G2). But like Arklow, he is on a losing streak.

Bigger Picture was second by a half-length to Arklow in this race last year. If Arklow and Campaign fail, he might offer enough of a late kick to take this. However, at 8 years old, there's not much improvement left to be made.

Pillar Mountain ran sixth by 5 ¼ lengths in the Sword Dancer Stakes (G1) at Saratoga. In fairness, he ran against some tough horses and won a Belmont optional claimer before that. He is the third or fourth selection.

In other words, Campaign is the top choice, followed by Arklow, Bigger Picture and Pillar Mountain. All four of those horses hold a reasonable shot.

With Campaign preferred, a logical play is an exacta key wheel.