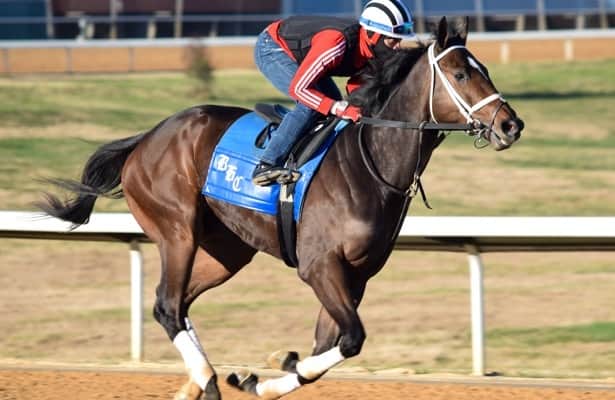 Maiden winner Caddo River enters the $150,000 Smarty Jones Stakes on Friday at Oaklawn Park as the 5-2 second choice in a field of seven. Although he lacks stakes experience, he is the most promising runner entered and one that bettors can focus their wagers around.

Caddo River's lone win came in a Churchill Downs one-mile maiden race on Nov. 15, and he was a close second in an Oct. 11 maiden special weight at Belmont Park. Yet there are good reasons to single him.

To start off, Caddo River opened by 9 1/2 lengths in the stretch under a mild hand ride in the maiden score, earning a 107 TimeformUS Speed Figure.

The 107 ties the favorite Cowan’s recent TimeformUS figure for running second in the Remington Springboard Mile, making it less of a value to accept Cowan at lower odds since Caddo River already matches him.

Not only does Caddo River match Cowan, he also owns a 109 on TimeformUS as well through his runner-up effort in the Oct. 11 race, giving him the highest figure overall on that scale. For those who use BRIS, Caddo River’s 94 in the Nov. 15 win stands as the highest dirt speed rating as well.

In the Oct. 11 Belmont race, he was tested in the first part of the race before facing decent closers in the stretch. Unfortunately, the replay is not on YouTube. For those who can find the race, though, watch how Caddo River contests the pace with Chasing Fame through hot fractions of 22.04 and 44.64 for the seven-furlong distance. Unconvinced? To back up the claim of a fast pace, TimeformUS marks those fractions in red.

The following month, Greatest Honour was a close second to the promising Known Agenda at Aqueduct and then broke his maiden at Gulfstream last month. Many expect Greatest Honour to enter the Derby trail and find success, especially given his trainer, Shug McGaughey, and royal blood as a grandson of Better Than Honour (the dam of Rags to Riches and Jazil).

With those points in mind, Caddo River was battle-tested from a pace standpoint against a (likely) good group. Notice that TimeformUS gave the Oct. 11 Belmont maiden race a 104 class rating and this race only a 101.

If that is accurate, then Caddo River hits the mark on speed figures and class, even with only a maiden win. The Smarty Jones field is not strong.

To touch on the favorite Cowan, as stated above he did run second in the Springboard Mile to a powerful closer in Señor Buscador.

But it is disappointing that Cowan had no answer when Senor Buscador flew late.

All of Cowan’s previous races were in sprint races, and those efforts include a runner-up finish in the Breeders’ Cup Juvenile Turf Sprint.

Back in May, Cowan also broke his maiden in a 4 1/2-furlong dirt sprint at Churchill Downs, giving him at least one win on dirt. But one race afterward, he faded to fifth by 13 lengths as the 4-5 favorite in the seven-furlong Runhappy Juvenile Stakes before the switch to shorter turf sprints.

Cowan must give the physical appearance of being a sprinter. Otherwise, why would trainer Steve Asmussen wait for his sixth start to try a one-mile route? Most trainers know from an early point whether a horse can sprint or route and make the appropriate adjustment sooner rather than later.

Connections feel obliged to try horses at longer distances because reaching the Kentucky Derby is always the goal. The term “Derby fever” is real and results in sprinters spotted in tough situations.

Perhaps Cowan still finds a way to hold off Caddo River and squeak out a win, but on paper, he looks like a true sprinter with no final punch late at one mile. Caddo River is the better choice as a proven route winner.

In most of the race analysis on this blog, three or four horses are recommended. But this is a case where Caddo River gives enough reason single him in all wagers. Why accept Cowan at a lower price when Caddo River already surpassed him with the highest dirt speed figure?

With that point in mind, Caddo River the only playable option.